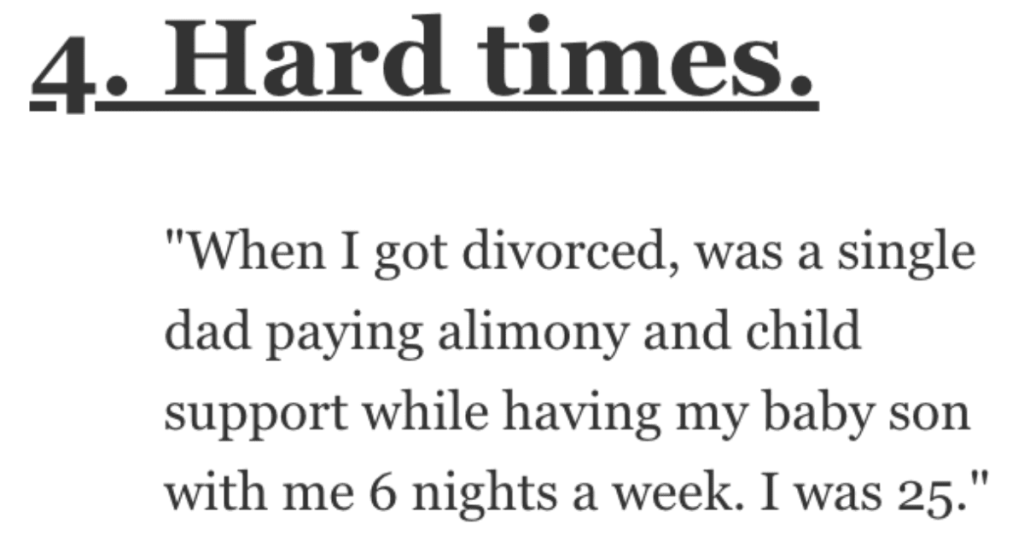 When Did You Lose Your Innocence? People Shared Their Stories.

Everyone loses their innocence at different times in their lives.

But one thing is for sure: no one ever forgets when it happens.

When did you lose your innocence?

I don’t remember most of my childhood, but I remember we were on vacation, I think it was when we had gone to Orlando to visit DisneyWorld and we were at the hotel. My mother was particularly stressed and she had tried to talk to my father and he said something to her.

I know this is very understated and not this big dramatic event, but I think that was the first time that I understood that my mother was unhappy, like it was one of those moments that all the pieces started to fit together.

As a kid, you just kind of want to believe in the fantasy you’re being sold of your parents being in love and having a nice partnership and that was the turning point for me. I don’t want to make this much longer, but long story short, I just had a different view on everything, it hurt to see her hopeless like that. It wasn’t the first time or the last time, but it was the shifting point.”

“When I was 7 and a family member held a shotg** to my face.

It had been chipped away at during the physical a**se leading up to it. But something in me changed that day.

“When my dad sat me down and talked to me about the miscarriage my mom had, before I was born.

The trigger was me asking him why he was so overprotective with me and I felt suffocated. It was pretty graphic. I saw him trembling when he told me that he went to see the soulless bodies of the twins my parents expected.

After listening to the story his final phrase was: “I don’t want to hurt you. I just want you to know that we only have one kid and we worry. Be careful in your life.””

“When I got divorced, was a single dad paying alimony and child support while having my baby son with me 6 nights a week.

I didn’t know what changed at the time. I came to realize that hope for the future was taken away from me.

“A religious teacher told me that Jesus was d**d and it was my fault personally. He was using our religion to punish me for misbehaving as a child.

I realised at that moment that adults were people and capable of deeply cruel and malicious actions for relatively petty reasons.”

7. Wrong side of the tracks.

Started in a private school with a scholarship and was b**lied for being from the poor part of town.”

She was dating a neo-N**i type dude, getting tattoos and getting d**nk instead of taking care of her kids.

“When I was b**lied heavily starting from the 8th grade all the way to graduation until I almost k**led myself.

Then the trend continued in the military until I had a mental breakdown and got discharged.”

“I was repeatedly m**ested by my grandmother when i was around 7 and 8.

I didnt really realize what was going on at the time, and didnt start to think until recently the affect it had on the rest of my life.”

“When my dad got cancer. He was strong. Truck driver strong.

He never showed weakness, so i thought he would beat it. I was very wrong. It only took a few months for him to turn into skin and bones, and pass away in his sleep. After that, my life went to hell.

My dad provided for the family, since my mom had a lung reduction and had COPD and couldnt work. My mom gave away our dog that my dad made me promise to take care of, all so me, her, and my eldest brother could move to another state to live with her mom.”

“When I was about 5 or 6 years old I had a best friend who lived right next door. He had a younger (mostly mentally) disabled brother.

My friend and I played together often, and we always had to make sure to close the fence appropriately, otherwise his younger brother would “escape”. One day, the fence wasn’t closed properly, not by our doing. His younger brother had walked into the nearby river and d**wned.

In my head I knew it wasn’t my fault, but I was so young and it was so much that I just blamed myself for it. I had seen the fence and touched it many times; what if I had somehow k**led this young boy? Suffice to say I lost quite a bit of my innocence that day.

In hindsight I know it was not my fault, and that it was very very wrong for his parents to only keep a small fence between him and almost certain death, but at the time I didn’t.

His parents were mentally disturbed as well I later heard from my mother, and apparently the young boy had escaped in the past before, being found in the middle of the road or playing near the same river. Not too long after his d**th they moved and I never saw them again.”

Tell us your innocence lost story in the comments.