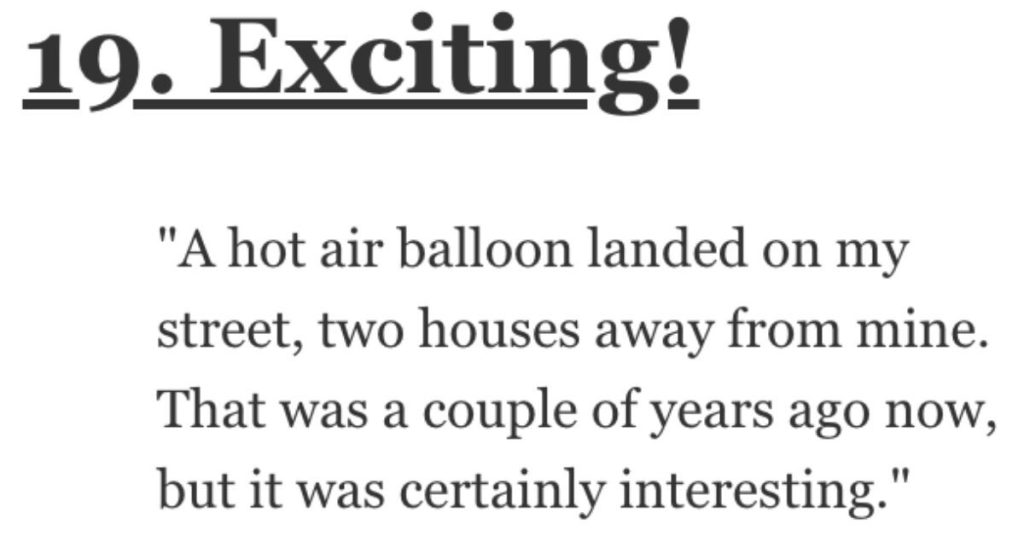 When Did You Say “You Don’t See That Every Day”? People Responded.

Hey, you don’t see that every day!

Have you ever said that before when something totally unpredictable or weird happened?

I’m pretty sure that most of us have…so these stories will be a lot of fun!

AskReddit users talked about things that made them say, “you don’t see that every day!”

“I helped a German guy at CVS jump his car.

To thank me, he gave me a fancy bottle of shampoo.”

“While jogging slowly up a steep hill, I got cheered on by the driver of the Oscar Meyer Wienermobile.”

“I was walking through my neighborhood with a couple friends one morning and a couple women drive up to us and ask if we have seen their horse.

We were confused and told them no sorry and they drove away but literally 30 seconds later a horse runs out of the woods about 10 feet in front of us and runs past us down the street.

We were all awestruck.”

“A bride in her wedding gown running in the train station being chased by two women holding the train of her dress.”

“I once took the Chunnel from London to Paris, first time ever doing so, or even being in France for that matter.

As I was walking through the station a dude ran up to me and started quacking like a duck.

I still wonder how that dude is doing two years later…”

“Watched a guy on a quad drop his hat, look back and decide to leave it behind.

About 2 minutes later, some guy in a tan car drives up, swerves around it, stops, leans out of the car, picks up the hat, puts it on and then just drives away like nothing happened.”

“At around 3 am, I saw a man rollerblading through the lobby of the Ritz Carlton.

I could not believe the hotel staff were just letting him get away with this but no one even attempted to stop him.

I ended up getting on the elevator behind him.

The man was Jim Carrey.”

“When i was working nights on security I saw two cats getting chased by a rat.

I questioned life for a brief moment.”

“I saw a dude absolutely BOMBING a hill on a skateboard, joint in hand, and a crossbow on his back.

Like a medieval reenactment crossbow used for storming the gates of Helms Deep.”

“An ambulance ran over a pedestrian while on the way to a medical emergency, so they picked up the pedestrian they just ran over and came back to the hospital.

Fortunately both emergencies turned out okay.”

“On vacation in London my wife and I were waiting for a train in a tube station.

Two trains arrived at the station before ours showed up. As a native New Yorker, I was comforted to see that pigeons live in subway stations everywhere.

The first train pulls into the station and the doors open. As people enter and exit the train, one pigeon flutters down from the ceiling, lands on the platform and calmly walks onto the train like he’s off to work or something. My wife and I laugh about this a little as the doors closed and the train pulls away from the station.

The second train pulls into the station, the doors open, and people shuffle out. After a moment a different pigeon walks out of this train and then flutters up to spot vacated by the first pigeon.

Anyway, seems like London pigeons have the tube pretty much figured out.”

“A big old ceramic tub flew off a flatbed truck and exploded into a million pieces on the interstate.”

“Worked as a waiter and after we finished one night a dr**k man was walking down the street.

One of my coworkers recognized him and asked if he was the German opera singer doing a show in the city.

He answered yes and asked if we would like to hear him sing. So he gave us a 3 minute private concert in the middle of the night drunk of his a**.”

“When we saw a pickup truck pull a boat down a city street…without a trailer.

Lots of sparks, though. I still wonder about that.”

“I saw a wedding being held in a parking lot.

Instead of rings they had gold spike bracelets and the bride had a YOLO tramp stamp gleaming above her jean shorts.”

“Our tiny kitten had stolen a slice of pepperoni pizza and was hissing and snarling and fighting off two adult dogs and an adult cat.

Nobody was getting that slice of pizza from him.”

“Riding Septa out of center city (Philly) New Year’s Eve, I watched a wasted college age dude board the train with a gigantic bottle of champagne and then repeatedly puke into it.

Not sure if there was champagne still in it but the bottle was like 2 feet tall. There must have been like 3 gallons of champagne in that thing.”

One day, I pull up a scan of a person who had abdominal pain. Specifically, they had felt “tension”, then a distinct “popping”sensation with sharp pain, then a vague but moderately severe ache that persisted.

So I’m looking for the usual suspects in this sort of presentation – appendicitis, diverticulitis, maybe epiploic appendagitis or inflammatory bowel disease.

Found a foreign body in small bowel – looked odd on single slices, so I reformatted the image set in 3D: Found a bread clip.

Interestingly, I found another one about 6 years later. My 2 cases constitute about 5% of all cases ever reported.”

“A hot air balloon landed on my street, two houses away from mine.

That was a couple of years ago now, but it was certainly interesting.”

“Watched a horse k**l a rattlesnake once.

Alternated between stomping it with hooves and picking it up to whip it around with it’s mouth.”

My husband and I were at stop sign and guy comes out of nowhere on a bicycle, holding a weed whacker and there was a huge rabbit in the hood of his coat.”

“A grown man wearing a shirt, socks and shoes and an adult diaper (no pants) carefully looking through each aisle at the grocery store.”

“A barefoot backpacker in nothing but shorts, playing a Saxophone while walking through a busy parking lot.”

“Tire flying off the truck in front of you, aiming in your direction.

Thank goodness, must of had a horseshoe up my a** that day!”

“I work security on the side. I feel like I could give you a different answer every so often.

Watched a guy the other day going through boxes of men’s shoes and sniffing them, looking for ones with a foot scent. When he found them, he’d get a little fidgety. Went to the back of the department with a few boxes and was looking around heavily.

But there was a family and a bunch of kids around, and he left abruptly. No joke, the way he was acting and how he was positioning things… he was about to f**k a pair of Nikes. It was some wild s**t.

Watched a guy bust out of the store one time with about $1,300 in clothes and right into the side of his getaway vehicle, which then ran him the f**k over. Not ashamed to say I laughed my a** off (he lived).

Have you ever seen any weird stories that made you react this way?

Share your stories with us in the comments. Thanks!