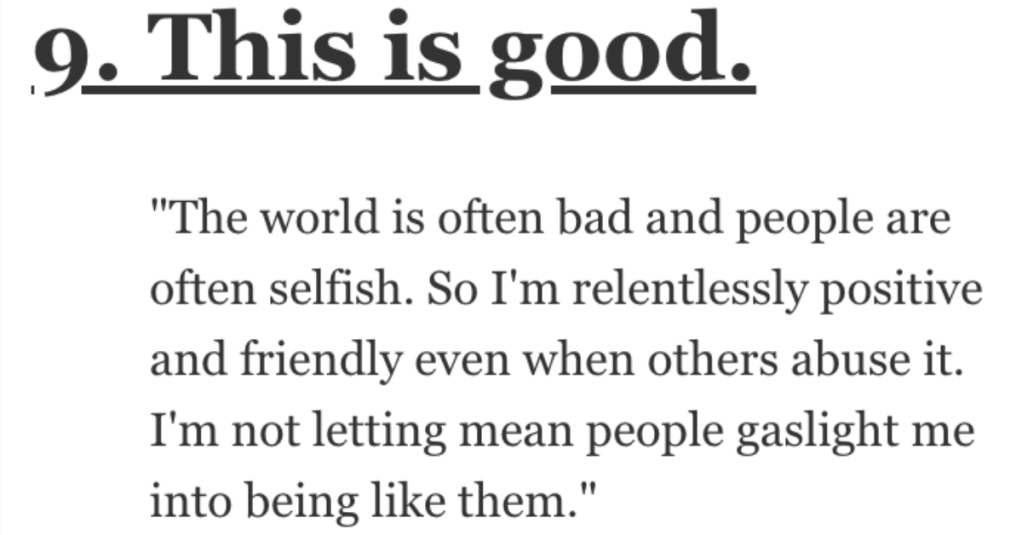 Why Are You Nice to Others When You Don’t Receive It Back? People Responded.

Be nice to everyone!

It really is that simple.

And it’s a philosophy that we should all strive to live by…even though it can be hard from time to time, because you know how people can be…

AskReddit users talked about why they’re kind to people even when they don’t get it in return.

Also, having less empathy is often genetic, neurological, mental health, and gut bacteria related. (There should be consequences for hurtful behavior and actions, but people themselves are a f**king mess of complications). I don’t need people to be kind to me, because I have a lot of beauty in my life.

I want everyone else to enjoy the beauty in their lives, too, even with the struggles. I want them to thrive alongside the pain. I want them to be as happy and well as possible. I don’t want anyone to be stuck in suffering because life is short, and the reasons you may be a d**k are complex.

Your life is happening right now. It’s passing by. What beauty is passing by that you just don’t see? Can I make your path a bit more beautiful with a little kindness?”

“Being a dwarf, I get a lot of s**t from people: shouting on the street, pointing, people filming me and taking photos of me, asking me invasive questions, generally making rude statements about me or expressing weird assumptions.

It gets tiring and sometimes downright upsetting, for sure, but I never want to let that feed into how I interact with people in general. As soon as I am a d**k to someone preemptively, without cause, I have just ruined an opportunity to have a positive new connection in my life.

People can and will often surprise you, and even people who may seem ignorant or rude at first can change dramatically if I don’t just shut them down from the offset.

There is a line, of course. If someone is a complete unapologetic a**hole – f**k them. I’m not against standing up for myself and I have had to cut ties with people before, but in milder situations, people have the capacity to change and it’s kind of wasted potential to not encourage that, whether it is through empathy or kindness.

I used to let all of this get to me. I would be so angry and miserable, every day. I h**ed everyone. But eventually, I realised that empathising with people is a win for both parties: understanding where a person is coming from (not excusing it, but understanding it) made me less angry, and in turn allowed for them to not get defensive or aggressive like they would if they were just pegged as a monster.

Eventually, empathy just became easier. It made me happier, and it took less of a toll on my mindset.”

“I never know what goes on in others’ life.

Sometimes the little things like saying “excuse me” and “thank you” while shopping goes along way for some people.

Plus why would I waste my own time being an a**hole? I’d rather be nice and spread that joy to others.”

“It just never hurts to be nice.

You don’t know what people go through or how long it’s been since someone said something or did nice for someone, so I do my part to reset the clock on that.

I remember holding the door for a guy one time when he was like 20 feet behind me, and he was so appreciative that someone did something for him that sounded like he was about to tear up.

You just never know, so why not be a good person?”

““Everyone you meet is fighting a battle you know nothing about. Be kind. Always”

Even if they “deserved” it, I just feel kind of angry or upset after, never better.”

“I genuinely don’t get how you can just be mean or rude to people for no reason other than “I don’t have to be nice”.

Like doesn’t that weigh on you? Make you feel bad?”

“Because I could be the other person.

Today you, tomorrow me.”

“The world is often bad and people are often selfish.

So I’m relentlessly positive and friendly even when others abuse it.

I’m not letting mean people gaslight me into being like them.”

“It’s like armor in a way, if you refuse to be annoyed.

The people that are s**tty to you on purpose are also more annoyed when you just ignore it and continue to be pleasant.

When they escalate it to get a rise out of you, they look like even more of a d**k to everyone.”

“I avoided being b**lied by being nice and funny.

It was my defense mechanism for scary situations. For the most part I wanted to be left alone with my small group of friends, and diffusing situations by being pleasant seemed to work.

A**holes love a good fight, don’t give it to them.”

“Practicing radical kindness means assuming the best of everyone— heart- seeing them— and then acting toward them with compassion, patience, and humility. It means infusing what we think, say, and do through- out the day with warmth, understanding, and care. It means treating everyone— including ourselves!””

I believe in this quote a lot and try to live by it. Giving kindness is free and maybe, in some situations it may costs more effort.

But at the end of the day, I just want them to be happy. That is reward enough for me.”

“It isn’t a conscious choice, it is the way that I am.

Even when I am at my worst (feeling really down) I put on a smile. Having had some bad times that I wouldn’t wish on anyone else I just do what little I can.

Yesterday I complimented a woman on her bright pink hair and we had a short but sweet conversation about it.”

“The golden rule- treat others how you want to be treated.

However, once the line has been crossed it becomes “I will treat you the way you treat me.”

Though my tolerance is fairly high. You can despise someone, yet still be nice.”

“You catch more flies with honey.

Not saying your motivation to be nice should be to get things out of people, but more opportunities present themselves when you’re likeable and people want to be around you.

You sleep well and have diverse social groups to interact with. And being nice does not mean to let people take advantage of you.

Clearly communicate your boundaries and have the other person confirm that they’ve heard and understand you.”

“Having ideals means you stick to them no matter what. You have no expectation of getting anything in return.

Trying to be a good person is done solely because it’s the right thing to do. Not because you think people will like you better or you’ll be rewarded.

Even though being a good person has burned me so many times, I refuse to let it break my ideals.”

“Being kind is so much more powerful, if subtle, than unkindness.

It’s costs me nothing but a bit of mental gymnastics and for a few moments life isn’t terrible.”

Live your own life and try to set an example.”

“Honestly, it makes my life easier.

It’s not too much work to be kind and I do not have to worry about what people think of me.”

“What if they’re just having a bad day? Or year? Or life? You never know.

They probably didn’t mean to hurt me. Or they just have problems. I don’t know. Regardless, it’s okay. I’ll live.

And maybe make their day a little better, at least I hope so.

“I want to be a good example for the children around me.

I also can’t sleep at night if I make poor choices because the guilt will eat me alive.”

23. The power of positivity.

“I measure my success in life by how much positive energy I can put out into the universe.