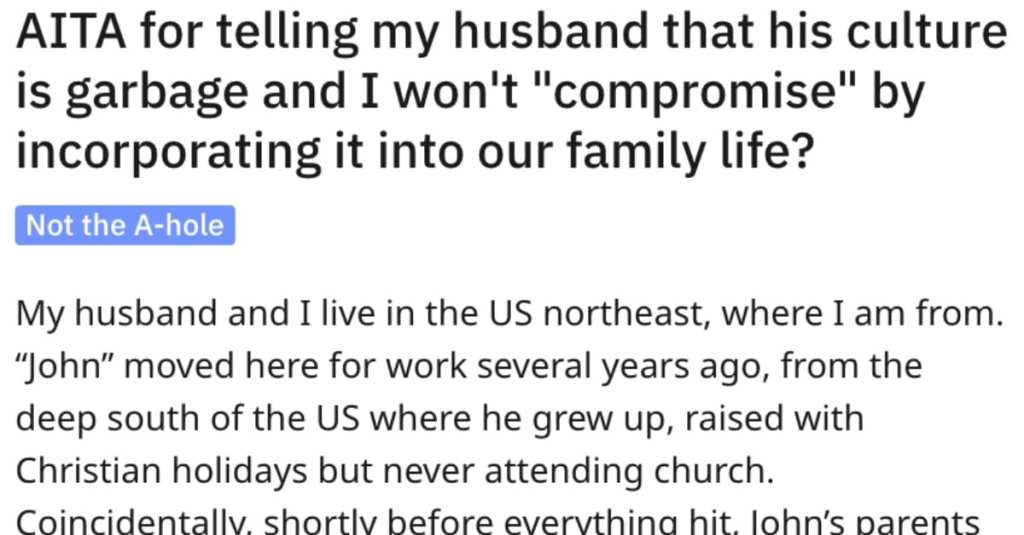 I think things are about to get heated in here!

But let’s get to the story…a woman wrote a post on Reddit’s “Am I the *sshole?” page asking if she was wrong for speaking out to her husband.

AITA for telling my husband that his culture is garbage and I won’t “compromise” by incorporating it into our family life?

“My husband and I live in the US northeast, where I am from. “John” moved here for work several years ago, from the deep south of the US where he grew up, raised with Christian holidays but never attending church. Coincidentally, shortly before everything hit, John’s parents AND his childhood best friend “Dan” and his wife decided to move here as well.

This past weekend was the first that us three couples have gathered together since any of us moved here; we had a “distanced picnic” at our house. John sat down 2-3 minutes after I did, as he was settling our kid into his pen in the yard with us.

Dan and my FIL immediately started to “jokingly” rip on him for being “whipped” and doing “my” job of parenting our child while he was supposed to be “allowed” to just catch up with the two other men. I was trying to politely deflect when it turned to how “mean” I was for not “fixing him a plate” and serving him before serving myself.

If I thought a certain dish would run out before he got to it, or if he had asked me to, I of course would have! Dan and FIL continued to brag about how their families “do it right”, where they handle the “outside chores” while their wives handle the “inside chores” (including the care of Dan and his wife’s two children).

I think it’s important to note here that both currently live in rented condos that by their nature do not have “outdoor chores”, and both their wives have always worked full time, as I do.

The whole day was kind of wrecked by that start, and I was frustrated when John left with Dan and FIL to “go for a walk” and left me to do all the clean up alone while also looking after our kid.

I expected John to apologize when he returned hours later, but instead HE got at ME for “making [him] look bad” in front of his friend and dad. He brought up how “a traditional division of labor” is “a huge part of southern culture”, and how I was being “disrespectful” to his background by “forcing northern culture” onto him and his family.

He said he’s been building up a lot of “resentment” the past few months that I “make” him do half the chores and childcare, since in his “culture”, women do the chores and hands-on childcare, and men do the fun parenting, the discipline, mow the grass, and bring in the cars for oil changes when needed.

I was stunned but honest and told him southern culture is garbage. It’s bigotry. I lived in John’s home state for 8 years, and I saw how “southern hospitality” is reserved only for those in your in-group. Deviate from the norm–be queer, non-Christian, a POC, a liberal, a non-traditional woman–and they turn on you viciously. Does every single person act like that always? No. But it’s the culture.

John is livid and says his “culture” is just as valid as that of other global regions, religions, and ethnic groups, so I am the bigot by not “compromising” with him here and incorporating aspects of his culture into our family life the way I would if his “culture” was “Islamic or Asian or whatnot”.”

This woman said that she’s about to marry a Southern (gentle)man but they’ve taken a totally different approach to the situation. 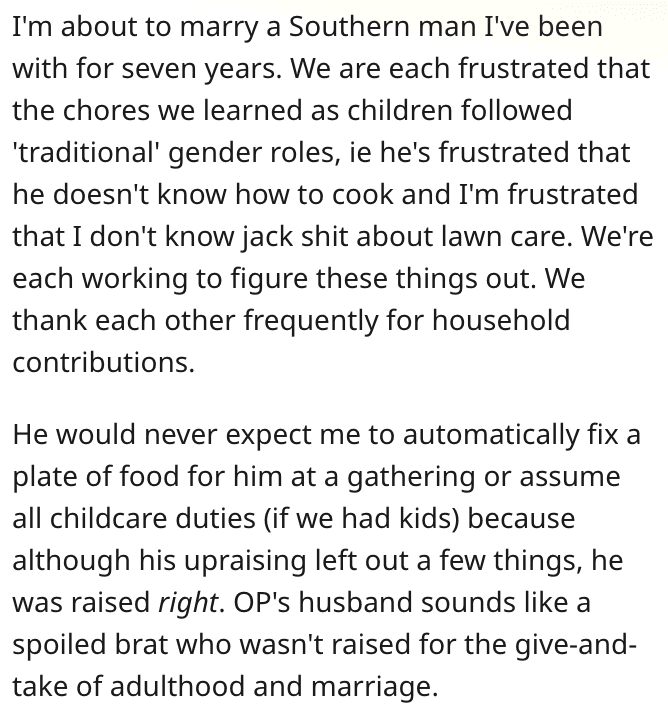 Another reader said that their husband was raised in a s*xist environment but he has worked hard to change the behaviors that he learned from a young age. 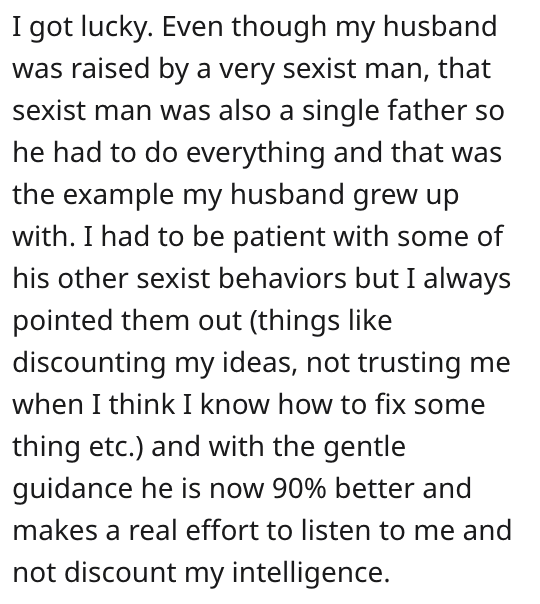 Another person from the South said that they vehemently disagree with some of the backward traditions there and that some Southern men are way behind the times. 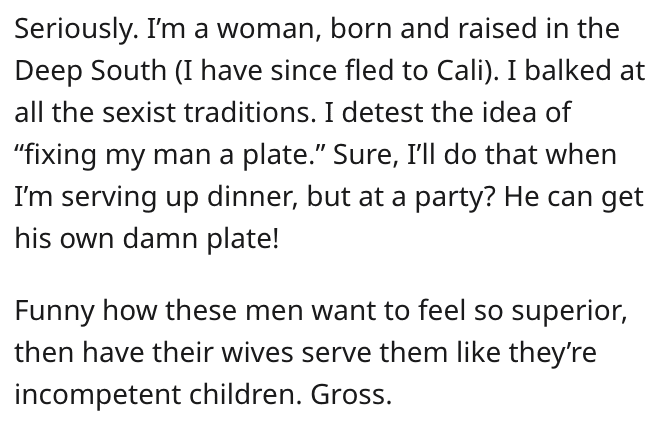 This Reddit user said that this man is controlling and that he sounds like a serious d*uchebag. 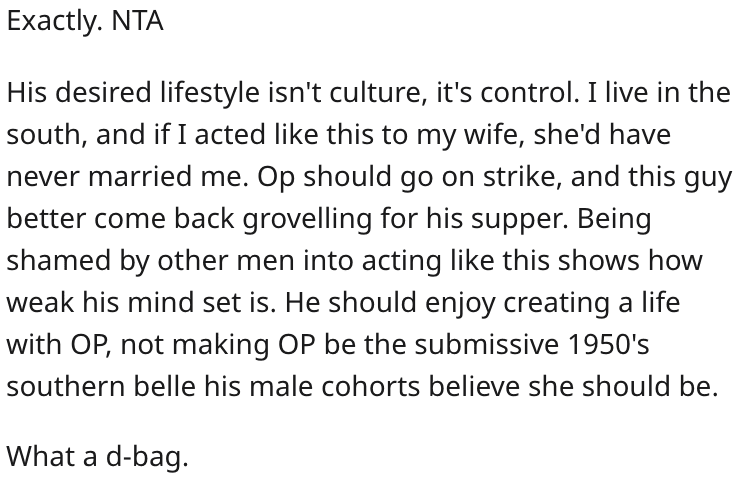 And finally, this reader said the woman wasn’t wrong for voicing her opinion and that the women can say whatever they want because they’re the ones who are usually carrying the load. Preach!

Share your thoughts with us in the comments. Thanks in advance!