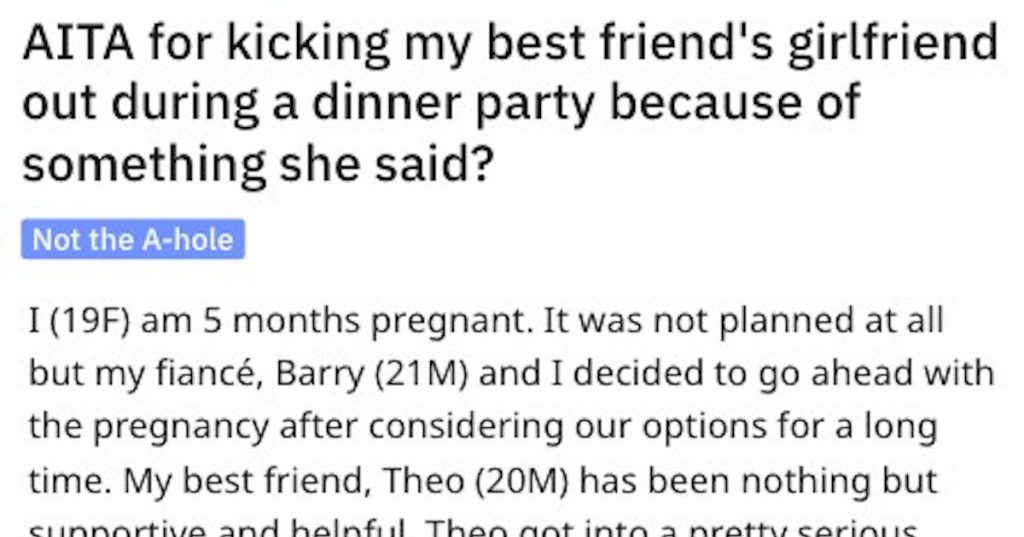 Woman Asks “Am I The Jerk For Kicking Best Friend’s GF Out Of A Dinner Party?”

You really gotta p**s someone off to get kicked out of their dinner party.

At least, I think you do…I haven’t been kicked out of one…yet.

But that’s exactly what happened when a young woman gave a woman at her dinner party the old heave-ho.

AITA for kicking my best friend’s girlfriend out during a dinner party because of something she said?

It was not planned at all but my fiancé, Barry (21M) and I decided to go ahead with the pregnancy after considering our options for a long time. My best friend, Theo (20M) has been nothing but supportive and helpful.

Theo got into a pretty serious relationship a few months ago but I have never met her so I suggested we have a dinner party and invite some other friends as well.

Ava (23F) seemed very sweet at first but then I noticed that she seemed cold towards me. I thought it was just me but Barry asked me about it as well. I thought she may just be having a hard time surrounded by new people so I didn’t make a big deal out of it.

We all sat down to have dinner and Ava asked me how my pregnancy was going. I thanked her for asking and said it was alright. I steered the conversation to another topic just because I didn’t want that to be the topic of the night. It was alright from then onwards for a while. Ava seemed to get along well with everyone.

I was feeling a bit tired so I excused myself and went to get a cold drink. When I came back my friends were just making sure I was okay and asked me if we should wrap up the party early and I said no. Ava made a comment about pregnancy being hard and I agreed with her saying it’s the hardest thing ever.

She then said “No offense but why the f**k didn’t you guys consider abortion” while laughing. I felt like that was such an awkward thing to ask…no one really answered but then Barry said it just wasn’t something we could do. He asked everyone if they needed more drinks, in an attempt to change the topic but Ava continued.

She said (something along the lines of) “You guys know you’re ruining your life right like yikes” still laughing. So I told her, a bit rudely, to please not say things like this since I was feeling uncomfortable. She replied saying she was brutally honest and that people liked that about her. I was thinking, I just met this girl.

I just couldn’t deal with this for the rest of the night so I told her to “please get out and maybe learn some manners” and I guess she didn’t expect me to say it but she did get out. Theo was so angry at me, he said I was ruining him and just left with her. After a few awkward moments our other friends supported my decision and we had a good night.

Yesterday Theo messaged me (for the first time after the incident) and told me that Ava was refusing to speak to him and he said “thanks I hope you’re happy”. Idk why that specific sentence just made me feel guilty.

I believe I may have been the a**hole, she was a new member of the group and maybe I was overreacting and she didn’t mean to insult me. Barry thinks otherwise but he may be biased so.”

This person took a funny approach to say what all of us out there are basically thinking about this person. 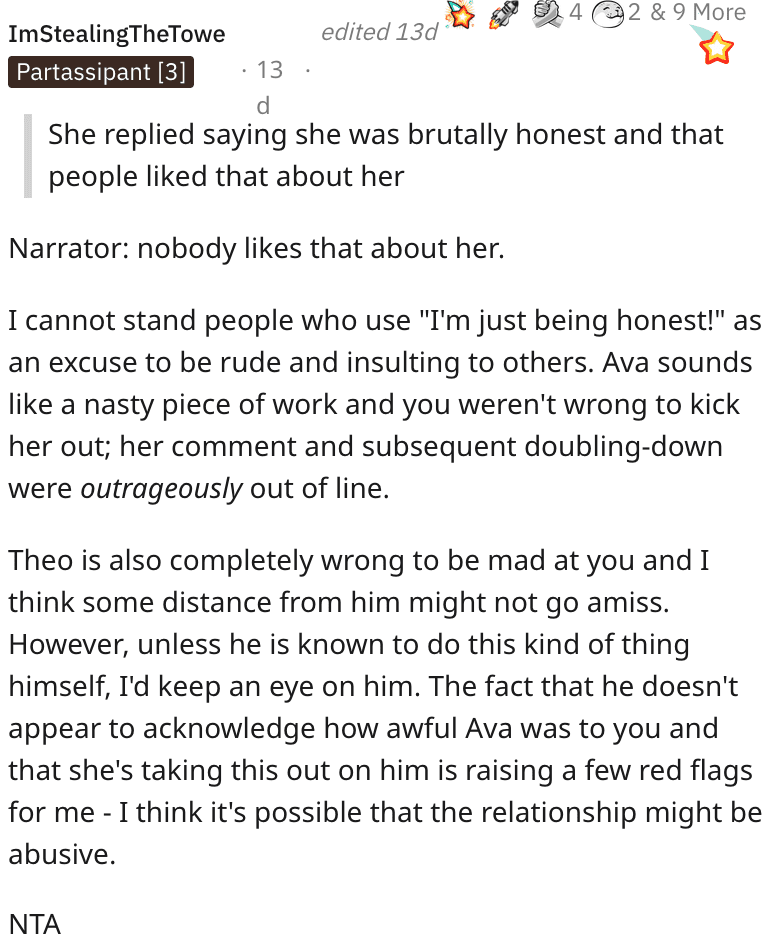 Another reader said that if you’re gonna dish it out, you better be able to take it. 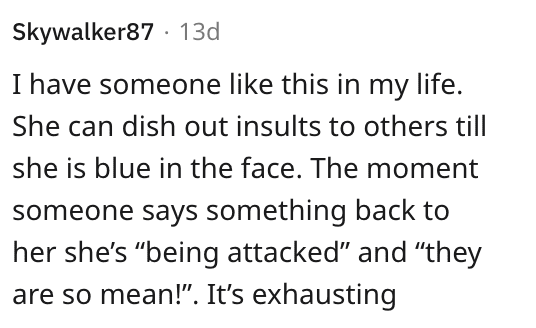 This individual said the woman was not the a**hole and it sounds like the dinner guest was just more focused on being rude.

Finally, this person said that you shouldn’t be brutally honest unless you’re asked…otherwise, keep your mouth shut! 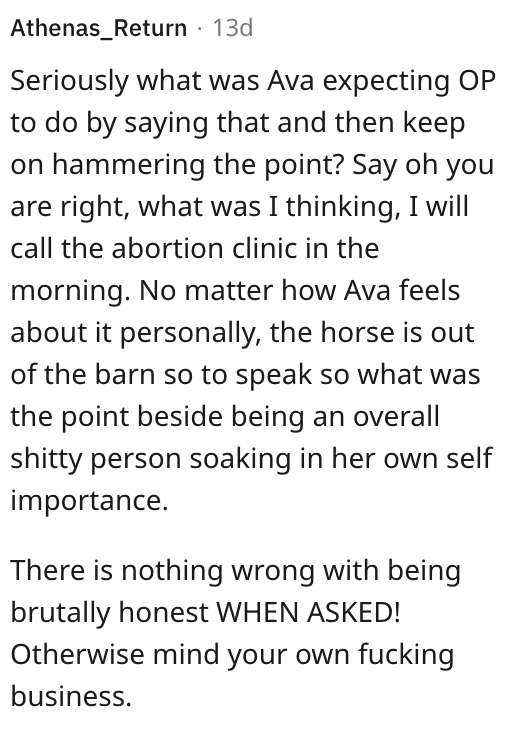 Did this woman overreact?

Or was she justified in her actions?