Woman Asks “Am I The Jerk For Kicking My Boyfriend Out Over My Cat?” And The Internet Responds

It’s either you or the cat!

I’ve never been through an experience like the one you’re about to read about, but I’m willing to bet that it happens more than you think.

Take a look at this story from the “Am I the A**hole?” page on Reddit to see what went down between this couple.

AITA for kicking my boyfriend out over my cat?

“For context, my (24F) boyfriend (30M) and I recently moved in together. It’s something we’ve been talking about, and when his lease ended he moved into my apartment.

I have a cat, Millie, who is my baby girl that I’ve had since she was a kitten. Back when my BF and I first started dating, he made the joke that if we were ever going to live together, he’d have to “get rid of that cat”, which I dismissed at the time.

When he would come over he would ignore Millie, making jokes about how cats are stuck up, how much he’s a dog person. Again, I dismissed this, bc he never acted hostile towards her. I figured it was just a preference.

When we started to get serious about moving in, he asked if I would consider giving her away, bc he didn’t like the idea of living with a cat. I almost laughed before realizing he was serious. I told him that under no circumstances would I get rid of my cat. I felt guilty about being unwilling to compromise, but he actually took it well, and reassured me that if she was this important to me, he’d get over it.

Fast forward to last night. I don’t think he realized I was in the kitchen when he came home. Millie was on the couch and I heard him go into the room and give this sigh.

Before I could call out, I heard him say “You’re so f**king worthless.”

It terrified me, because I’ve never ever heard him speak with such malice. He sounded like a different person. It was just so cold and hostile that I panicked, and rushed out there to see him looking at Millie.

Here’s where I might be the a**hole. I completely freaked out. I was yelling asking what he thought he was doing talking to her like that? He jumped and I scooped Millie up and told him to leave my apartment right now.

He looked so stunned and started to argue, asking where was he supposed to go? I told him that I don’t care, he just needs to leave.

He was pi**ed and said he was going for a drive and slammed the door behind him. I immediately started sobbing and holding Millie. I was shaking and she could tell I was upset and kept cuddling me. She calmed me down, and later when he text asking if he could come back, I said yes.

I put Millie in the bedroom so we could talk. We were both a lot calmer, and I felt awful after he explained his side. I’ll often call Millie little names and he said he was just trying to be playfully mean too and misjudged his tone.

But he said it felt awful that I chose a cat over him, and that I called it “my” apartment when it’s supposed to be our place. He told me he was constantly feeling second best to Millie, who I wouldn’t even consider rehoming, and I had thrown him out over an animal when he’s a person.

I explained to him how much he means to me, and apologized for ever making him feel like this wasn’t his home.

I think I might have overreacted, but I just don’t know. He’s my boyfriend and she’s something I keep refusing to compromise on. But I also don’t believe that he just misjudged his tone.

Now it’s time to take a look at how Reddit users reacted to this story.

This reader said that the boyfriend is lying and that she needs to get rid of this guy immediately before something happens to her cat.

Another individual argued that this kind of behavior could really affect the cat and even shorten her life span. 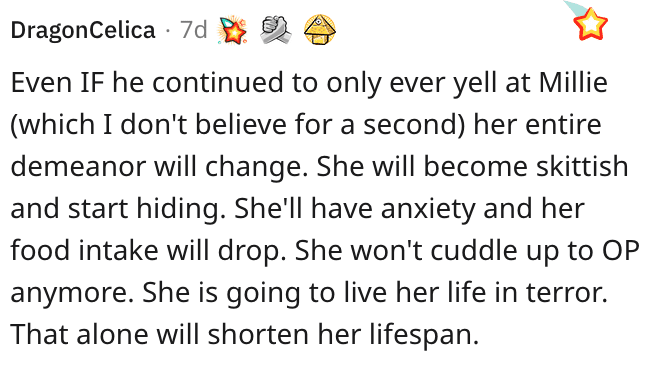 Another Reddit user said that the woman’s instincts about her boyfriend were definitely right in this situation. 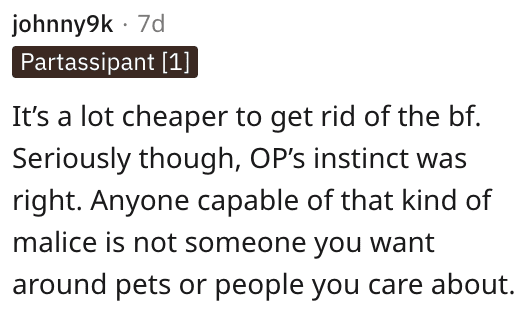 And lastly, this reader basically said that this woman needs to get rid of the guy as soon as she can before the situation escalates. 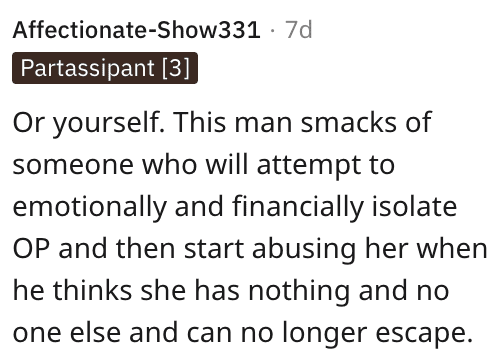 What did you think of this story?