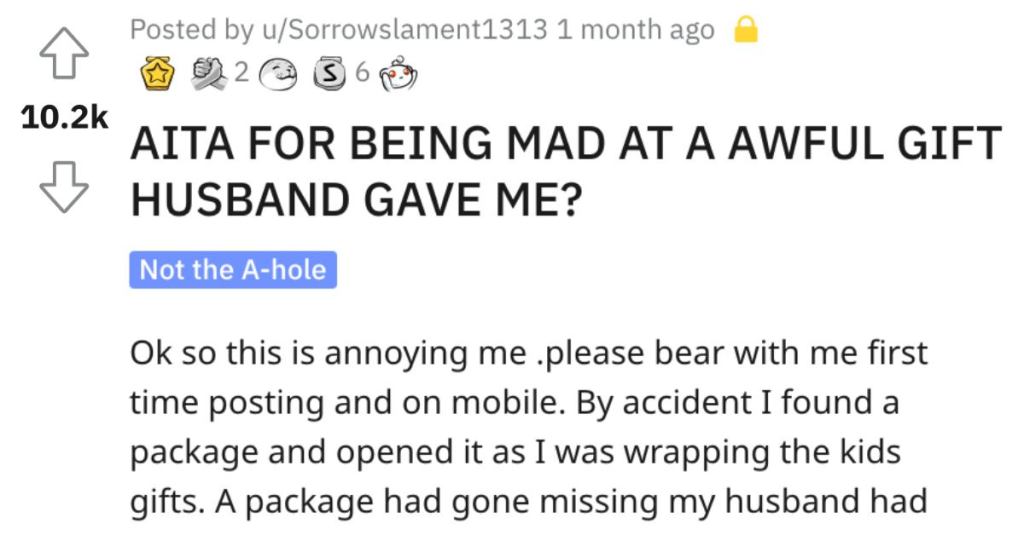 But is that a good reason to get mad at someone? Especially if it’s your spouse?

Hmmmm, I guess we’ll have to get the whole story from this person who took to Reddit’s “Am I the A**hole?” page to vent about their husband.

AITA FOR BEING MAD AT AN AWFUL GIFT HUSBAND GAVE ME?

“Ok so this is annoying me, please bear with me first time posting and on mobile.

By accident I found a package and opened it as I was wrapping the kids gifts. A package had gone missing my husband had orders and had been for my Christmas. Now in that closet I keep a bunch of unopened packages my mum sends to my kids and then open them the day I wrap them.

Anyway I open this package and it is obvious it is not for the kids. It’s a self help book 12 rules to whatever .. I’m like what the heck. The guy who wrote it is a phycologist Who is a misogynist right wing nut job. Who my husband likes and kind of falls in line with his own way of thinking. (Yes this is an issue as I’m rather left wing I guess) anyway so I tell him I found this package and accidentally opened it and he loses it saying how his name was on it and it had gone missing.

At this point I’m like wait , no no no the only package gone missing was his Xmas gift to me… so THIS was what he thought was a thoughtful gift for Christmas. Basically telling me I’m a s**t human and I need to change and this book will help. And he can’t understand why I am so pi**ed and was crying all night and most of the day. Am I wrong? This is not a gift you give on a holiday. This is expensive toilet paper IMO. I’m humiliated and embarrassed and hurt.

Like I was so excited that he thought of me in advance and it wasn’t a last minute Walmart gift . I’m so upset. But Am I the a**hole for not appreciating this thoughtful gift he got me ? update: and a bit more info. 1.Yes I’m fact he DID say it was my gift. And yes he said to help me change. 2.when we met he was not like this or at least it was never apparent.

It slowly became more of a thing then hit overdrive when he started watching throw guy. 3. I actually have in fact listened to him speak and find him intolerable. For many reasons. All this said , after realizing he somehow f**ked up (at least to my POV) he actually went out and got me some movies I wanted to see that we couldn’t because of covid.

A couple of Xbox gift cards to buy a game. And a uno type game “cuz I like that kinda stuff” so he made an attempt to make me feel better and happier and not be as much of an a** even if he still can’t understand why I’m upset. For those who keep saying I should just be happy I got a gift. I’d have been happier without it. Thank you everyone for your judgment . For clarity: I never bought him love languages I owned it and asked him to read it with me once and let it go after he said NO.

Also to respond to everyone hung up on my crying . Holidays are stressful as is. I had not slept almost at all for two days. Emotions were high and I was also responding to his yelling at me for opening a package BY MISTAKE. So yes I’m childish but honestly I also don’t feel it was that over the top of a reaction either.

I’m human and my feelings were hurt. Also I never at first mentioned the Author by name. So it was not me trying to start a huge debate about the guy or be bait or whatever. It was about am I justified to be upset about a self help book as a gift. That’s the yes I’m TAH or NO it’s not about my remarks on the writer.

And Lastly it was not a quick google search of him that I based my options off of. It was diving down a rabbit hole for hours and feeling gross after the fact. But FINE I’m a chaos dragon I except that!”

This reader said that this gift was nothing but insulting. 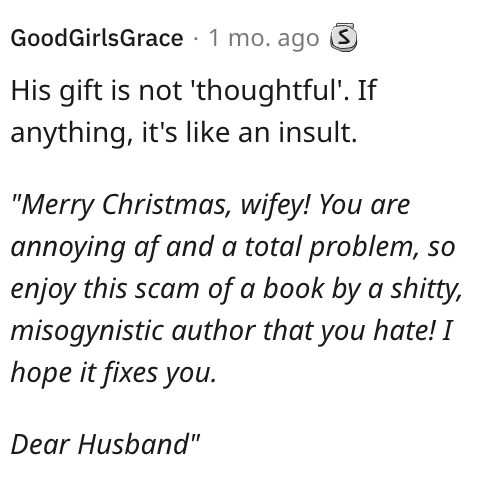 And another individual laid out a plan of action for this woman. 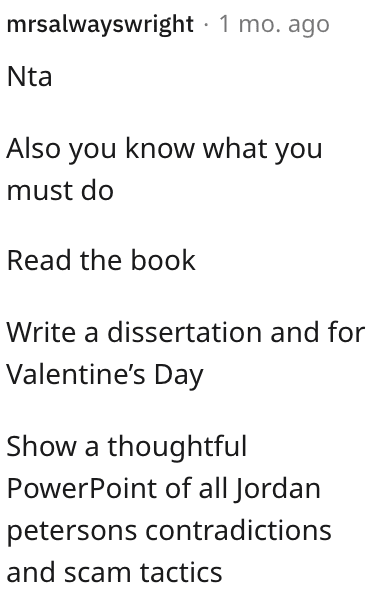 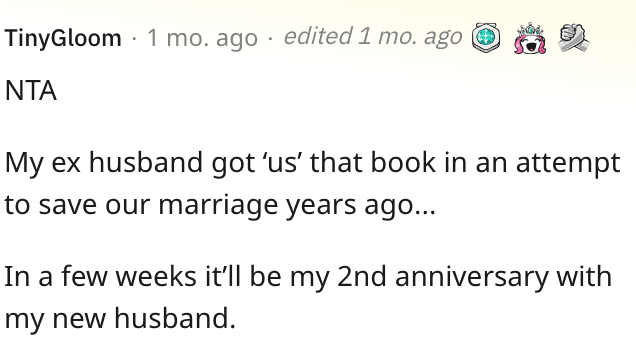