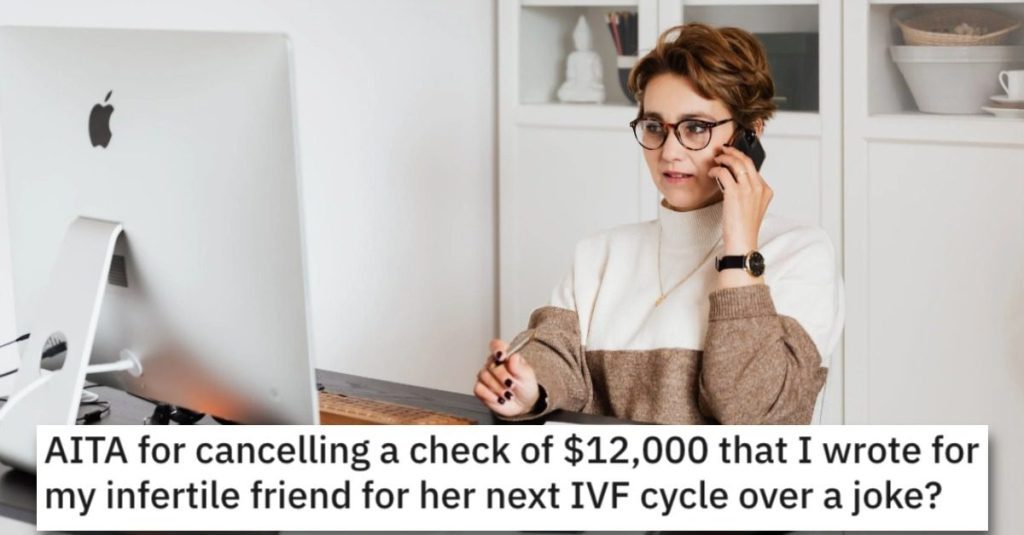 If someone writes you a check for $12,000 and you’re not even related to them, they’ve done an INCREDIBLY nice thing for you…

So something pretty bad must have happened for someone to cancel that fat check, right?

Let’s see what’s going on here. Get all the details below!

AITA for cancelling a check of $12,000 that I wrote for my infertile friend for her next IVF cycle over a joke?

“I (F35) am infertile. My ex husband and I tried everything to have kids but it just never happened.

He divorced me, went and married someone younger who was able to give him a kid and from what I gather, they’re expecting a 2nd child together. It hurts like hell seeing someone else have what I couldn’t. I get frustrated with myself sometimes and with family blaming me for basically everything.

I turn to my friends for support, Especially “Alessia”, she’s in the same “infertility boat” as me but she and her husband are currently trying IVF hoping it’d work.

Alessia asked me for help to pay for her upcoming IVF cycle. I agreed to write her a check of $12,000, I really wanted to help her and the money came with no strings attached. I wrote the check and gave it to her last week. She was very appreciative of it.

The very next day, I got a sudden message from a mutual friend “Carol” with a screenshot of the conversation she had with Alessia. Turns out she and Alessia were talking about the next IVF cycle, and Alessia said she hoped the cycle would work because “she didn’t wanna end up divorced, and having her husband go marry someone younger and have a baby with them and another one on the way! While she’s alone and without a family at 35! (She’s 32)

. I was stunned and…hurt, I knew she meant me here. But I did not confront her I simply contacted my bank and cancelled the check. In the evening, Alessia called to ask why I cancelled the check and I told her. She went bats**t saying she didn’t mean it that way and that she thought that this was somewhat an “inside joke” between “desperate infertile women”.

She came over with her husband the next day begging I write another check but I refused. An argument ensued and her husband thought I wasn’t being supportive of her like when she supported me throughtout my struggles. She left crying and we haven’t talked since then.

Her husband keeps reminding me (while repeatedly calling Carol a toxic snake) of the date of the next cycle saying they can’t have it after I took the money that was supposed to pay for it back!.

Some friends thinks I’m being oversensitive. Carol’s on my side telling me to tell them to go to hell but I feel so bad about it. what I’ve done might just damage our 15 years of friendship. Maybe I shouldn’t have cancelled it but I just felt so offended by what she said about me and how she basically mocked my unfortunate circumstances.

This person said she’s NTA and what her friend did was cruel. 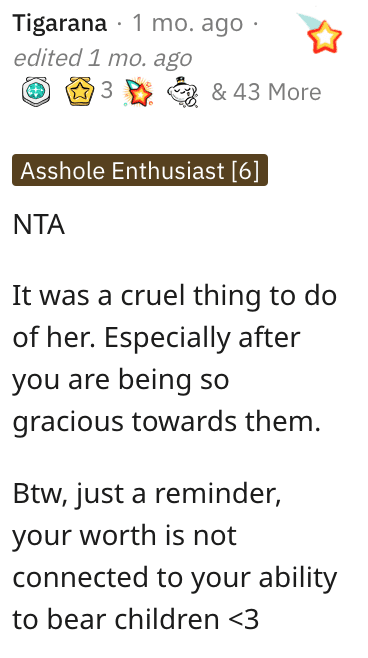 Another individual agreed and said her “friend” finally showed her true colors. 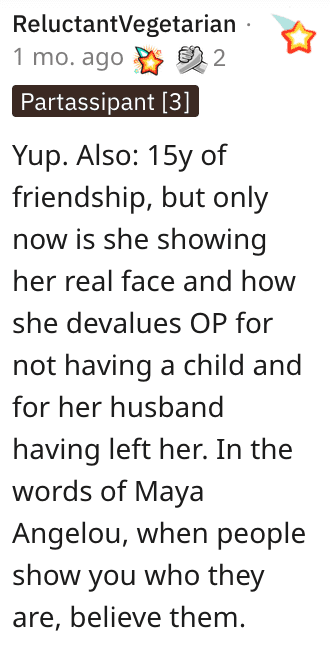 And this Reddit user said she’s NTA and she should see if her friend Carol needs the money instead.