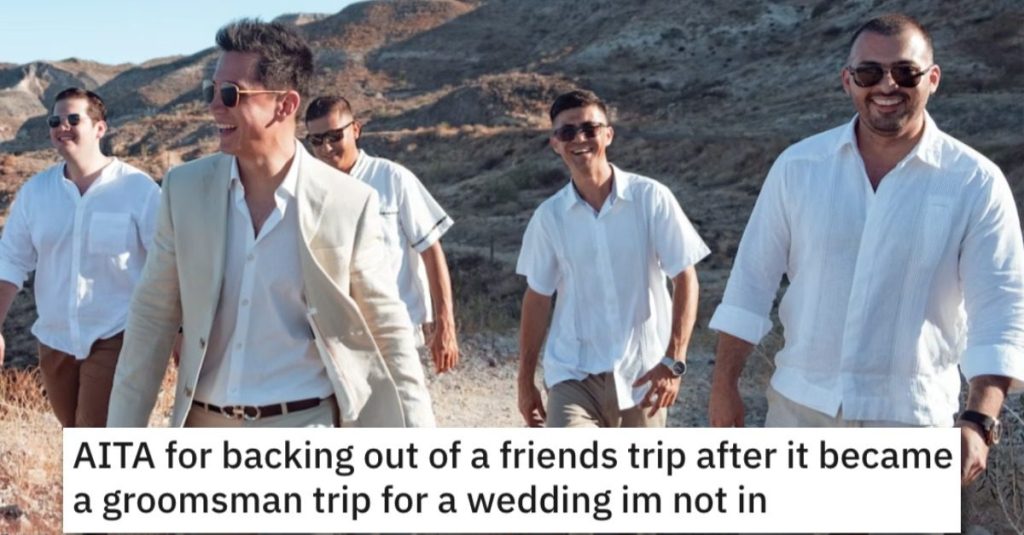 When plans change for a trip, things can get complicated.

And that’s especially true when the trip takes a complete 180 and becomes a getaway for a groomsman…and you’re not in the wedding.

So is this guy an a**hole for backing out?

You be the judge after you read this story from the “Am I the A**hole?” page on Reddit.

AITA for backing out of a friend’s trip after it became a groomsman trip for a wedding I’m not in?

“I have had a group of four friends since elementary school. The five of us have stayed close friends through elementary, middle and high school (going to the same schools) and then through university (separate universities, but we would visit often and stayed very close). We are all 26yo guys, and have been friends for 19 years now.

One of the guys in the group, Brandon, is getting married in January. Brandon asked the other three guys to be groomsmen in his wedding, alongside his two brothers and two of his friends from college. this left me the only homie in the group who wasn’t a groomsman.

I was upset when I first realised, but I talked to my parents about it and they reminded me its Brandon’s wedding and not a ‘group event’, he can have who he likes up there, and just because im not a groomsman doesn’t mean Brandon’s doesn’t consider me a friend. and that he does already have 7 people up there beside him, which is a lot.

my parents are the only one I ever told I was upset about it, and now I think im pretty well over it. they’ve had a few grooms-party gatherings, like they went for drinks after they got fitted for suits, and went golfing together, and Brandon and his fiancé had a bbq for their wedding party – that’s always a weird reminder for me.

My friends and I usually go on a trip in December to watch a football game. we started the now tradition in our first year in university, and have been going every year since. its always just been the 5 of us friends, and we go for like 3/4 days. On Tuesday my three friends came to me and wanted to know my opinion on inviting the other groomsmen on the trip as a surprise to Brandon. the three of them were clearly all for this idea, and really wanted me to say yes.

I told them I wasn’t sure, I had to think about it (which was awkward because it was obvious they thought I was just going to say yes). I spoke to them about it today, and said honestly I dont want to go on a trip being the only non-groomsman.

I know Brandon’s brothers, and I’ve met his college friends, and they’re all cool, but I dont want to be the clear odd man out. I told my friends that they should do it, I just won’t go this year – which was fine for me because I could do with saving some money because I have a separate destination wedding to go to in February now.

The other guys won’t invite the other groomsmen if it means I won’t come. but its clear they’re also annoyed at them not being able to invite them because of me. one of my friends spoke to me separately and he told me he really thinks im not fair or a good friend, and asked if its because I resent not being a groomsman. Feels like any decision I make besides agreeing to go on the trip with the four other groomsmen is going to make them mad at me.

AITA for backing out of the trip if I am going to be the only non-groomsman?

Now it’s time to see how folks reacted to this on Reddit.

This reader said he’s NTA and that his friends are a**holes for ruining this trip. 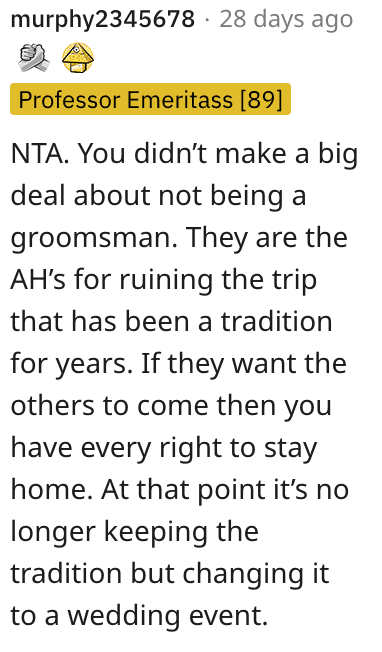 And this individual said he’s been very understanding about this and that he should have used this opportunity to talk to his friends about what’s going on here.