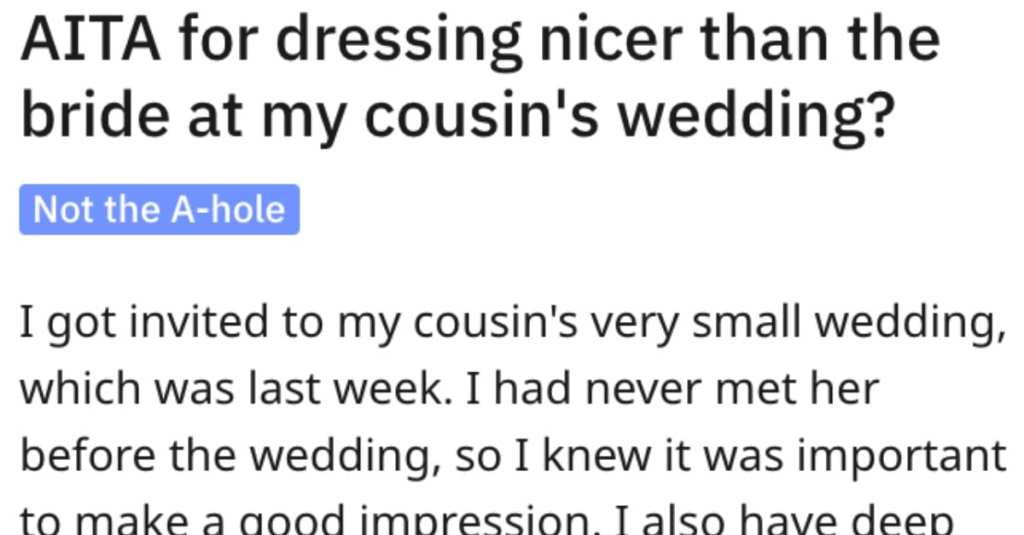 Woman Asks if She’s Wrong for Dressing Nicer Than the the Bride at a Wedding. Here’s What People Said.

In case you didn’t already know this, you’re not supposed to upstage the bride on her wedding day.

Trust us on this one, it’s a bad idea all around…

And this woman unknowingly did that at her cousin’s wedding…and now she’s looking for some feedback from the fine folks on AskReddit’s “Am I the *sshole?” page.

AITA for dressing nicer than the the bride at my cousin’s wedding?

“I got invited to my cousin’s very small wedding, which was last week. I had never met her before the wedding, so I knew it was important to make a good impression.

I also have deep insecurities about how I look due to being bullied as a child, so I always need to look as nice as possible when I’m going out, even just to get coffee.

I started planning what I would wear immediately. The invite said cocktail attire, and I settled on a tea length dress I had worn to other people’s weddings, with matching colored chiffon shawl and flats as well as a real pearl necklace and earrings.

I didn’t buy anything new for this, just did my best with what I have. I made sure my makeup was decent and didn’t clash, and made sure to get my hair cut a week before the wedding so it would look its best as well.

Well, I think I was the only one at her wedding that cared how they looked. Most of the 30 guests were in t-shirts/polos and shorts. I was one of two guests wearing a dress. The bridesmaid wore something that looked like it was out of Hot Topic.

The groom wore a tuxedo shirt and black jeans. The bride wore…holy hell. The bride wore a custom gothic dress that looked like a purple, red, and black patchwork dress. Her hair was not brushed, and she did black makeup so heavily that you could barely see her face. I was shocked.

Several people came up to me during the reception to say that I looked nice, but was upstaging the bride, which was not my intention. The bride herself was quiet the whole night. I tried to try to get to know her as that’s what she requested, but she wasn’t interested.

The wedding ended and on my way home, I got flooded with calls from her mother and new husband that I was a horrible person for “dressing like Grace Kelly” and going out of my way to “make the bride feel ugly at her own wedding”.

I didn’t, I just can’t go somewhere, especially to what I thought was a formal event, looking less than my best.”

Let’s see how people on Reddit responded to this woman’s story.

This person said she was not an *sshole and that the invitation wasn’t clear enough about what people should wear. 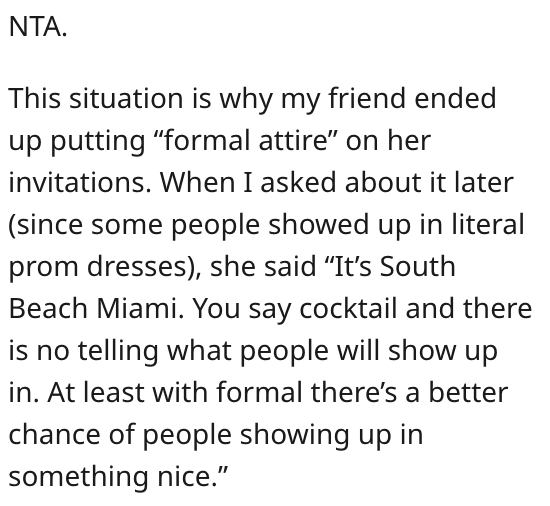 This person argued that the woman didn’t do anything wrong and that people should have been dressed up…it was a wedding, after all. 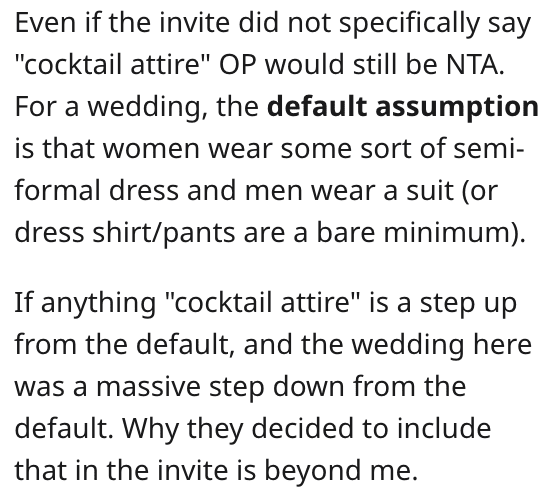 Another Reddit user said that the writer of the post just followed directions and wore what she thought was cocktail attire.

They also added that this cousin seems like she might just be a whole lot of drama, too. 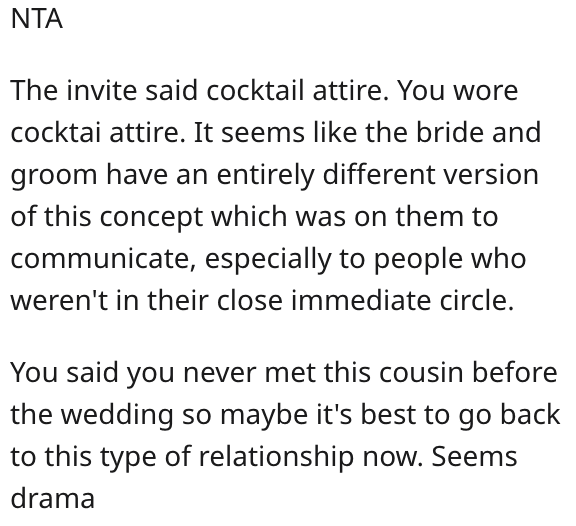 And this person made a very good point: since when is cocktail attire t-shirts and shorts? I can’t say I’ve ever heard of that. Have you? 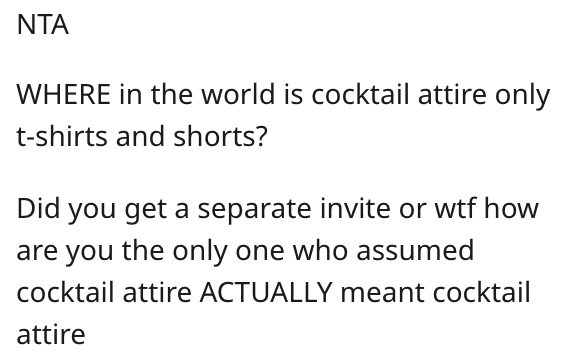 Oh, boy…now we want to hear from you.

In the comments, tell us what YOU think about this situation.

We’d love to hear your thoughts.