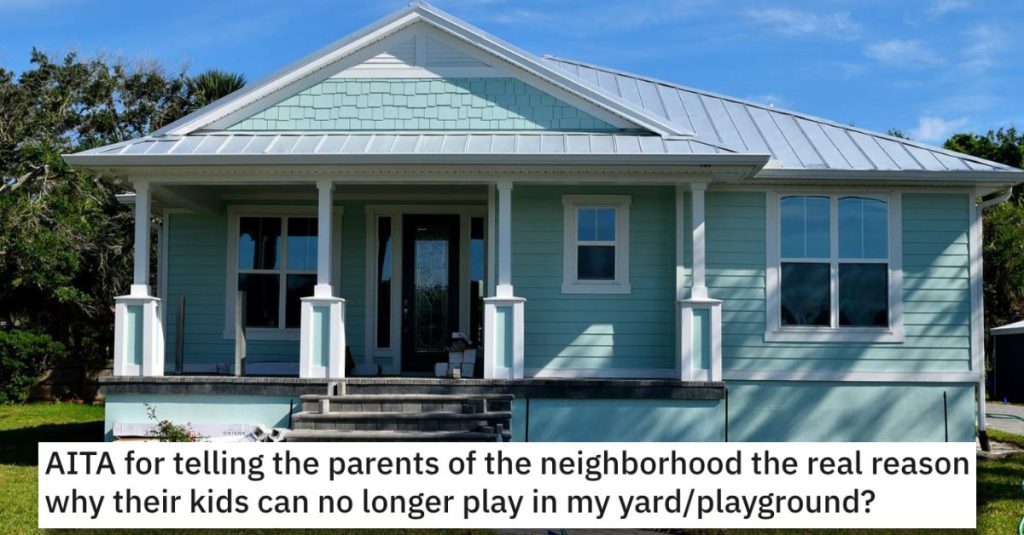 Every once in a while, you just have to lay down the law…even if it’s gonna hurts some feelings.

And a woman asked if she was wrong for spitting some truth to some parents in her neighborhood.

Read on to get the whole story and we’ll see you in the comments.

AITA for telling the parents of the neighborhood the real reason why their kids can no longer play in my yard/playground?

“My grandparents owned the lot next to their house, they just used it for more yard space. But when my sister and I were born grandpa knocked down the old shed on the empty lot and built a playground for us.

Everything was made with his own two hands. It was a kid’s dream and we both played there any chance we got. And after we grew up they let the kids of their neighborhood use the place to play with no issues. But then some years later they passed and the house went to my mom.

I found out I’m expecting so my husband “Andre” and I started seriously looking for a house when we’d only been half trying before. Mom suggested we buy my grandparent’s house since we know it’s a good place and us buying it would keep it in the family. It’s still in good shape, has no HOA, and is close to a good school. So we bought it for a steal and moved in ASAP.

Right away we noticed parents hanging out at the playground with their kids. We didn’t mind at first and used the chance to introduce ourselves. Everyone was lovely and younger than I’d expected but it seems a bunch of couples with kids had taken over the street in the past 5 or so years.

The problem arose when Neighbor Witch (NW) brought her kid over one afternoon. I happened to be by the window and saw a flash of red outside. It was a kid in a red shirt literally standing on the ROOF of one of the 2 story playhouses, almost 10 feet off the ground. I ran outside, thinking he was alone and said he needed to get down right now.

That’s when NW stormed over from who knows where and yelled at me to f**k off and not tell her kid s**t. I asked if she was his mom and after getting a yes I asked her to make her son get down before he got hurt. She argued saying I couldn’t make them do anything, so I told her this was my property and yes I could.

That’s when the kid fell, thankfully once he was halfway down and only onto the grass but he still wailed like he was dying. He was fine. He got up without issue and ran over to NW. She picked him up and said if he’d been hurt she’d have sued me so I threatened her with the cops if she didn’t leave. She flipped me off and called me a “gin jockey” (random af, I don’t drink at all, let alone gin) but left. Andre was worried other people might try to sue us if their kids got hurt on our land (I hadn’t even thought of that) so we put up a fence.

Parents came by asking why the fence so I told them why, and they can thank NW. I heard she’s been shunned by the other parents and none of them will let their kids play with hers.

I feel guilty her son is getting punished for her actions. Maybe just saying we wanted a fence up instead of telling them about NW would have been kinder? AITA?”

This reader said this woman was NTA and was only protecting herself. 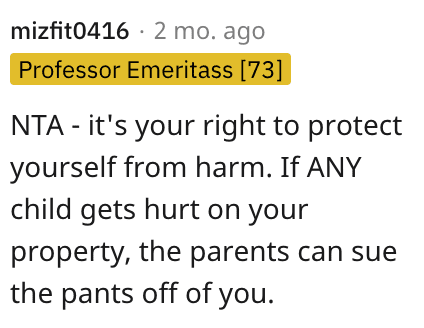 And this Reddit user brought up a good point about how stuff like this has affected communities. 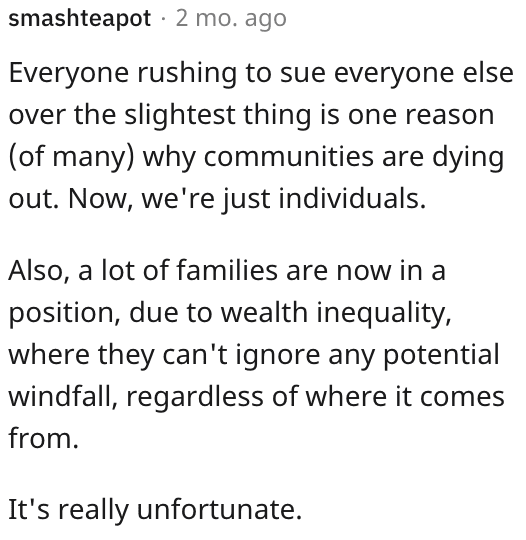 Another individual said she wasn’t an a**hole and putting up the fence was the only thing she could do. 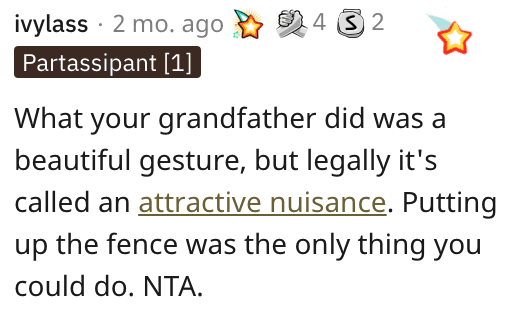