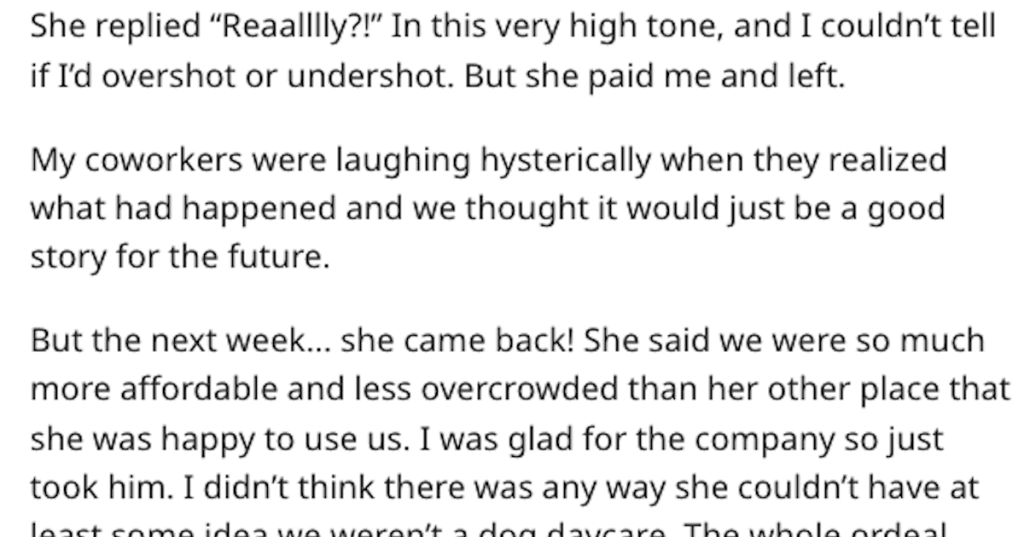 Doggy daycare is expensive, ranging from $35 to $50 a day, depending on where you live.

But it’s also a necessary evil if your dog has a lot of energy or you expect to be putting in a long day at the office.

One woman was surprised to find a great deal when she visited a new doggy daycare — just $20 a day! But there’s so much more to this adorable story than meets the eye.

Read on to find out about the doggy daycare… that wasn’t.

This isn’t a dog daycare at all

A while back I was working in an office that allowed dogs. It was an open floor plan and since customers never came into the office, we kept the dogs food and water bowls right by the front door just because it was the most convenient space and no one else would see them but us who worked there.

Of the six of us who worked in the main office area, I was the only one who didn’t have a dog (no pets policy at the apartment) and always felt horribly left out.

To make matters worse, across the way was a doggie daycare. One day a very frantic woman came in and she had an absolutely massive basset hound with her. Usually the only people who came into the office were associates who had appointments with someone working there, but it was rare they brought their dogs.

She ran up to me and said “Do you work here?” And I said “Yes, how can I help you?” And she said “I wasn’t sure if you took walk ins but I read online I could just drop him off? I tried to call but no answer.”

I didn’t know what she was talking about at that point and I said “Come again? Who did you call exactly?” Thinking if I could just saddle her off to whoever she came to see, I wouldn’t have to decipher her problem.

She said “Well it doesn’t matter now. Look, something urgent’s come up and I really need to leave him here. Here’s his food he likes and I’ll be back in a few hours and—“ at this point I wasn’t thinking of the doggie daycare. I thought maybe she was a friend of someone here.

I said “Well alright, can I get your name please?” And she said her name and then asked if I needed her to sign anything and I was so confused at this point I just said “Why would I need you to sign something?” And she left almost immediately.

So I took Otis (the dog) to the back and showed him to my coworkers and no one knew the woman or dog. I was worried she wouldn’t come back, but at the same time, my wish for an office dog had been granted! And Otis was supremely chill. All he did all day was lie around and drool onto his own ears. I just freshened him up every now and then, took him out every couple hours, and he was happy as a clam on a big cushy dog bed we thankfully had an extra of. He just loved attention from anywhere he could get it.

At the end of the day the woman, thank God, came back. She said “Thanks, you’re a lifesaver. How was he?” And I said “He was a champ.” And was about to say “But why is he here” when she said “Thats a relief. Most kennels say he gets anxious around other dogs. I heard you operated at a much higher capacity, I was thrilled to see you had so few clients in the room at one time. So, how much do I owe?” And that’s when I realized she thought we were a dog daycare.

Now, I probably should’ve corrected her. But I loved my day with the office dog and I did want to get paid for supervising this strange dog all day. I just threw out the number that sounded fair and appropriate “That’ll be $20.” I said.

She replied “Reaalllly?!” In this very high tone, and I couldn’t tell if I’d overshot or undershot. But she paid me and left.

My coworkers were laughing hysterically when they realized what had happened and we thought it would just be a good story for the future.

But the next week… she came back! She said we were so much more affordable and less overcrowded than her other place that she was happy to use us. I was glad for the company so just took him. I didn’t think there was any way she couldn’t have at least some idea we weren’t a dog daycare. The whole ordeal was so strange I just figured “don’t question a good thing.” (I was much younger and dumber then.)

Not long after, Otis started getting dropped off two, sometimes even three or four days a week. I was in heaven. He was such a love. And he made fast friends with the delivery guys and visitors.

One day we took our office Christmas card photo and Otis was over that day, so we included him. In a Santa hat. It was pretty great.

But it turns out Otis’ owner was friends with one of our clients who I guess happened to have the card out on her table or was kind enough to display it alongside her other holiday cards.

Because one day Otis’ owner came in holding the card and walked up to me and said “I can’t even believe I’m asking this but… is that my dog in this photo? This isn’t a dog daycare at all. This is just an office, isn’t it.”

She said it with a note of surprise, as though she was looking around and putting it all together for the first time (no coincidence that this was the first time she wasn’t in some crazy rush either.) She was like “Then who are all these other dogs?!” And I explained.

I was terrified she was going to demand her money back, or worse, take some sort of legal action against us for misrepresenting ourselves as a dog care business, or complain to corporate.

Instead she basically said “Why didn’t you ever say anything!” And I explained we just really liked having Otis around. She stopped for a minute and seemed to be thinking and said “Is that right?” And I said yes and told the story of how I was the only one in the office without a dog so loved the company.

She seemed a little flummoxed or hesitant, understandably, because the whole thing was so weird. She turned to my coworker and asked if I was telling the whole truth (I don’t know why she thought my coworker, also a stranger to her, was any more trustworthy than me, but hey. Strange times.) Coworker backed me up.

So she said, “Well, I wish you’d said something sooner. Could’ve saved me a lot of embarrassment with my friend back there. Alright, I have to get going. See you at 4:00.” And she left Otis! I couldn’t believe it!

I said “So he can stay?!” And she replied “Where else could I find someone to watch him one on one all day for $20?” And off she went.

Otis stayed my office dog until his family moved away, luckily right around the same time I took a new job.

With all this time sitting around doing nothing, thought it was as good a time as any to tell that story.

tl;dr – Woman drops her dog off in our pet friendly office, thinking it’s a nearby dog daycare. It becomes a regular thing. She doesn’t realize the mistake until she spots the dog in our company Christmas card, months later.

Now if that isn’t the sweetest story you’ve ever read, I don’t know what to think.

It was a win-win-win for everyone! We just love stories like this.

Redditors were also thrilled by this story and cracked a few jokes of their own: 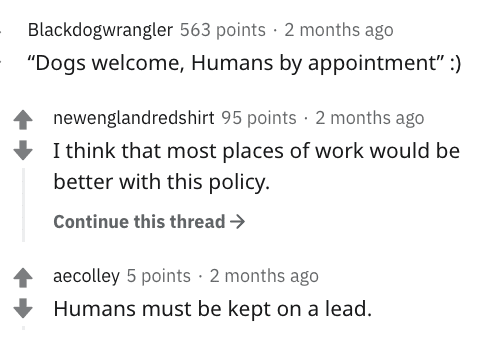 The original poster also made a comment that only made the story that much better: 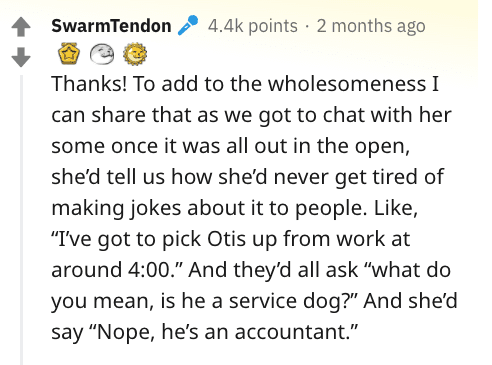 Redditors were relieved that this story had such a happy ending for everyone: 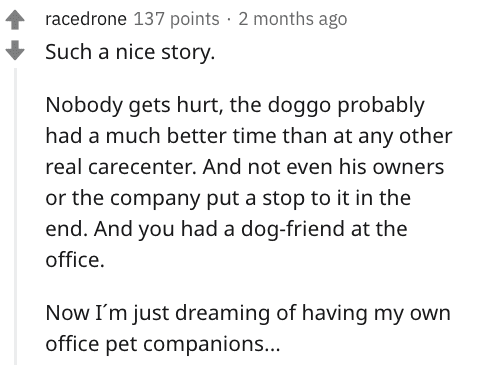 Others also commiserated with the original poster’s reaction when the woman first dropped off Otis: 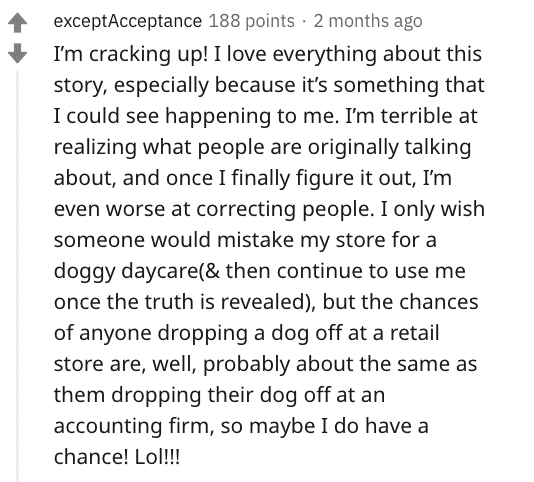 This is the kind of quality content we need on the internet. Dogs. Strangers. Kindness. Pets.

What more could you ask for out of a great yarn? Not much because that’s pretty perfect!

Do you ever take your favorite pooches to doggy daycare? Do you hire a pet sitter to stay at your house when you go on vacation?

We’d love to hear from you! Let us know in the comments!