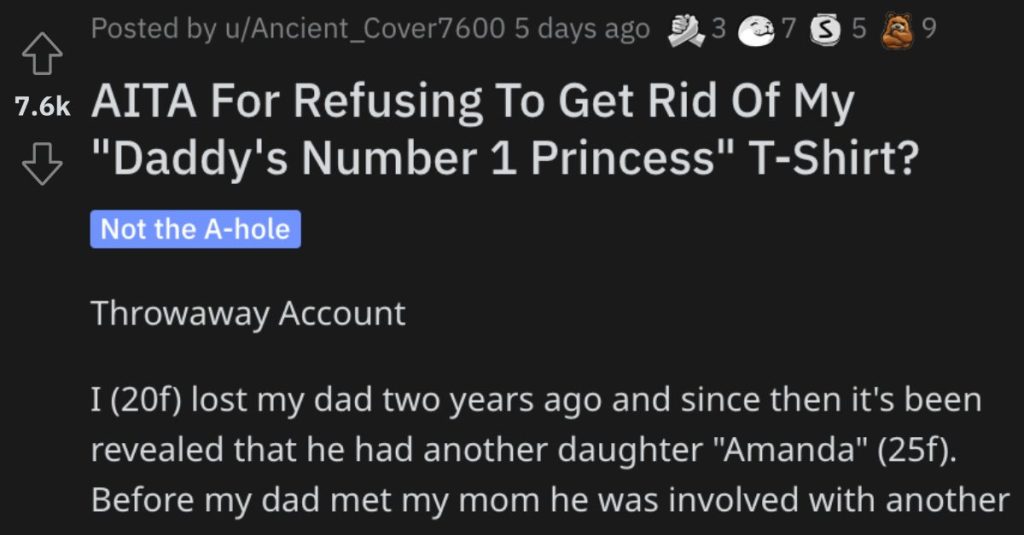 Woman Refuses to Get Rid of a Gift From Her Late Father. Is She Wrong?

Sometimes, we only have one or two mementos to remind us of our loved ones who have passed away.

And if that’s the case, you hang on for dear life, right?

Well, sometimes things can get tricky…

Take a look at this story from the “Am I the A**hole?” page on Reddit to learn about the sticky situation a young woman is dealing with.

AITA For Refusing To Get Rid Of My “Daddy’s Number 1 Princess” T-Shirt?

“I (20f) lost my dad two years ago and since then it’s been revealed that he had another daughter “Amanda” (25f).

Before my dad met my mom he was involved with another woman and dumped her when he found out that was engaged to another man. The guy was military and overseas so my dad had no way of contacting him and he didn’t know the woman well enough to reach out to any mutual friends, although my dad did later regret not trying harder.

Unbeknownst to my dad he accidentally got her pregnant and she tried to pass Amanda off as her fiancé’s but it didn’t work. She eventually married someone else but later divorced and the guy completely cut contact. Because of this Amanda always wanted to know who my dad was and tried reaching out to him but didn’t have much luck because, again, they didn’t know each other long, my dad wasn’t from there, he moved away and changed his contact information.

Eventually, Amanda got a hit through 23&Me through my cousin and reached out. By that time my dad was already gone but his parents, siblings and their children were more than welcoming. My brother and I were pretty weirded out by this and since our dad wasn’t on her birth certificate we didn’t believe her until there was a DNA test.

I wish I could say that this was some magical moment were we all hugged and are now besties, but honestly, I don’t feel this strong familial tie to her because I didn’t grow up with her. My brother says he feels the same but we both make the effort to be nice when she’s around.

Up until Amanda came around I was my dad’s only daughter and because of this he had a lot of “Daddy’s Favorite Daughter” type of things because I was his “only” daughter at the time. It was like a fun little joke between us.

Out of all the things he’s given me in relation to this theme that I cherish most is a custom made T-shirt he got me with a picture of us at a Father-Daughter dance when I was 12 and the caption “Daddy’s Number 1 Princess.” It was one of the last things my dad ever gave me and I love it very much. I never showed it to Amanda but I guess someone else told her and she gently confronted me about it and asked me to get rid of it and anything like this.

She expressed how she’s been in therapy to cope with never having a true father figure and that her actual father d**d because ever meeting her and knowing that I was his “favorite” daughter it really upsetting her. I told her that while I am sad about the situation and won’t ever bring it up around her I’m not getting rid of it.

I thought Amanda and I had an understanding until my aunt called and berated me for not being respectful to my sister’s feelings and that getting rid of a T-shirt that I don’t even wear is a small sacrifice because I at least have the memories of having a loving father while Amanda doesn’t.

Now it’s time to see what Reddit users think about this story.

One reader said that this Amanda character is clearly not being respectful about this woman’s feelings. 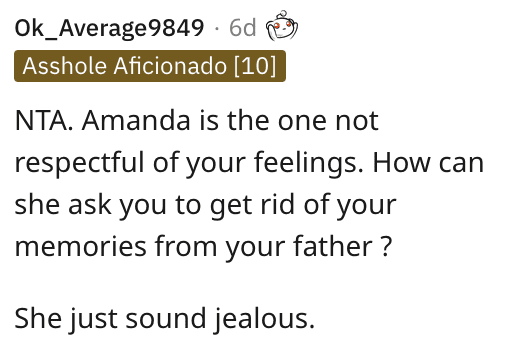 Another reader argued that while they can appreciate Amanda’s feelings, that’s her problem to deal with, not this woman’s. 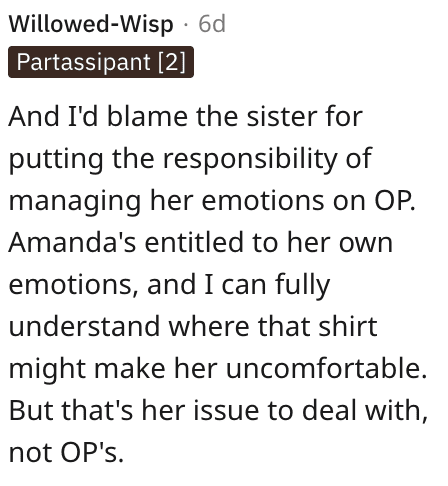 This individual said that Amanda asking to get rid of this sentimental item is totally out of line. 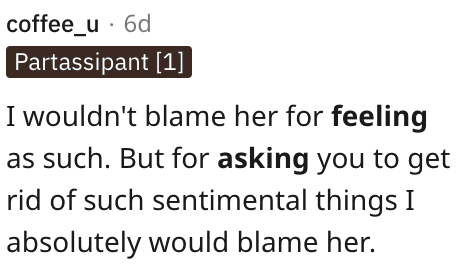 And this Reddit user said that the real a**hole in this story is the aunt. Amen! 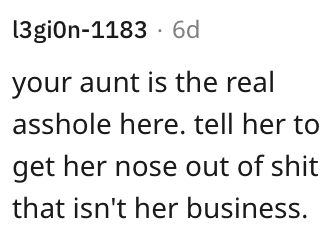