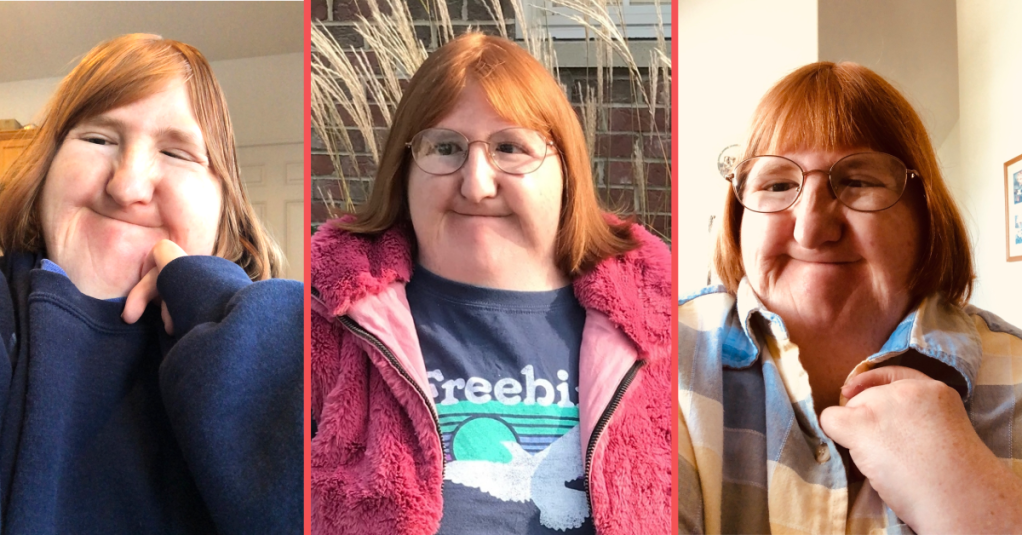 Most of us know what it’s like to feel self-conscious about the way we look.

If all those pandemic-induced video conference calls have taught me anything it’s that I get tired of staring at myself all day.

But one woman decided to face her insecurities head-on, and teach the rest of us something along the way.

39-year-old Melissa Blake could be you or me.

A freelance journalist and disability advocate from Illinois, Melissa lives with a rare genetic disorder of the bones and muscles called Freeman-Sheldon syndrome.

In August of 2019, she wrote an op-ed for CNN, and when that article began to gain traction, the trolls came out of the woodwork.

They left cruel comments about her appearance at a ferocious intensity that Melissa herself may not have been prepared for.

I’m used to being called names like ‘blobfish’ and ‘whale,’ but there was one comment I just couldn’t shake. Someone said that I should be banned from posting photos of myself because I’m too ugly.

It bothered her that so much of society over-emphasizes certain ideals of physical beauty.

And so she decided to fight back, kicking off a year (366 days, in fact, because 2020 was a leap year) of posting selfies.

During the last round of trollgate, people said that I should be banned from posting photos of myself because I’m too ugly. So I’d just like to commemorate the occasion with these 3 selfies… ???? pic.twitter.com/9ZuSYFOtwv

Melissa posted her pictures across multiple platforms including Twitter and Instagram, which then soared above 100,000 and 200,000 followers respectively.

In addition to her own writing, she was interviewed by national news outlets in the US and UK.

And although the one-year-mark officially arrived last August, she’s still at it.

I did a photo shoot today (more on that next week!), so of course I went outside to get some early spring selfies!! Plus, I don’t think I’ve ever worn this striped purple shirt before!!!

People have even started creating fan art for her, which she gladly shares with her followers.

Tonight’s fan art is giving me all the warm fuzzy thoughts because it’s a drawing of a selfie I used in my viral tweet!! Celine from Instagram drew this for a school project and I’m honored — such a sweet gesture!! ❤️? pic.twitter.com/32a96kKSTJ

Unknowingly, at the time, Melissa ignited a movement.

“I may have started this year of selfies for myself, but I soon realized that these selfies weren’t just about me. Other disabled people told me they identified with my words, too, and they began posting selfies of their own.”

Although she may have felt awkward posting the pictures at first, as she went along, she began to enjoy it.

It was liberating, and she appreciated that she could share her story with the world, particularly younger disabled people who might need the encouragement to be comfortable in their own bodies.

As the young people say, I’m totally rocking this LEWK for springtime shenanigans!! And let’s just be real…I’ll probably be wearing this hat all summer too!! #MyBestSelfie ??? pic.twitter.com/lZSxrHZz8X

But society, as we know, is not always kind. There is a long history of cruelty to the disabled community.

Our society makes it clear that disabilities are not considered beautiful or valuable.

Ableism tells us that disabilities are actually shameful and looked down upon by a large majority.

Some days weren’t easy. The trolls, after all, did not just go away because Melissa went viral.

But on those days, Melissa thinks about her childhood–about the role models she wished she’d had growing up.

And she thinks about the future.

Society is never going to change its ableist views unless we normalise disabilities.

And for that to happen, people actually need to see disabled people, who represent almost 25% of the US population and yet continue to be hidden from view.

The more we see people with disabilities, the more we can learn from their experiences and foster dialogues that are necessary for real, measurable change.

And that, after all, is what she’s doing it for.

Another good thing to come out of the past year is that Melissa landed a literary agent who can help make sure that her story and her magnificent voice will reach an even wider audience.

Soon kids like Melissa won’t need social media to see a reflection of themselves.

I signed with a literary agent today!!

For years, people have asked me if I’m going to write a book and I’d always reply “someday.” I’m so excited to share that my book journey to someday officially begins today! Here’s to writing the book I wish I’d had when I was younger… ✍? pic.twitter.com/SsfqXSJlL6

Melissa showed that small things can change the world in big ways. We can’t wait to see what she does next!