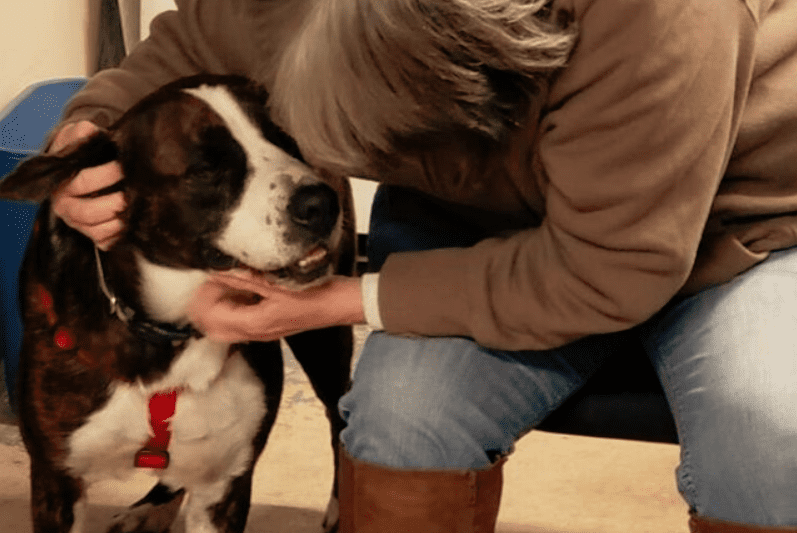 Woman Sees Dog who Spent 4 Years in a Shelter. Drives 1,500 Miles to Adopt Him.

Recently, IHeartDogs posted about a dog who was abandoned at a shelter on, of all days, Christmas Eve in 2015. Until then, the unfortunate pup had lived there, spending Christmas after Christmas, for four years.

Heartbroken readers shared the story over social media and then a miracle happened. A woman saw one of the posts and made a decision to change this sweet dog’s life.

Kathy Ahearn saw Bernard’s face on Pinterest and she knew she would never forget it. She read about his lonely, sad background and how he had spent most of his life living in a shelter.

Ahearn recently lost her two dogs, Chubsy and Fluffy, to natural causes. She knew she would adopt again someday, but was it too soon? She wasn’t sure. So, she took time to think if she was ready to open her heart and home to Bernard.

One problem she saw with Bernard was the distance. His shelter home was in Texas, which was about 1,500 miles away from where she lived in Florida.

But she still couldn’t get Bernard, who reminded her of her beloved Chubsy, out of her mind.

So, she called the Bulverde Area Humane Society.

Shelter staffers had come to love Bernard over the years and so they weren’t sure they wanted him to be so far away. They had hoped he would remain in the area so he could return to the shelter if he ever needed help.

But after talking to Ahearn and learning more about her home environment and her love for dogs, they agreed with her–she would be perfect to adopt Bernard.

The drive to Bernard took Ahearn four days, but every mile was worth it when she met Bernard for the first time.

Bernard is now safely at home with Ahearn, who is patient and loving with him, as he learns about life outside of a shelter. Toys and steaks are new treats for him, but she is confident he will come to enjoy these little luxuries as much as his other doggie-housemates. She even hired a specialized trainer to help make his adjustment as easy as possible.

We love when using social media results in a wonderful ending to a hard luck story.