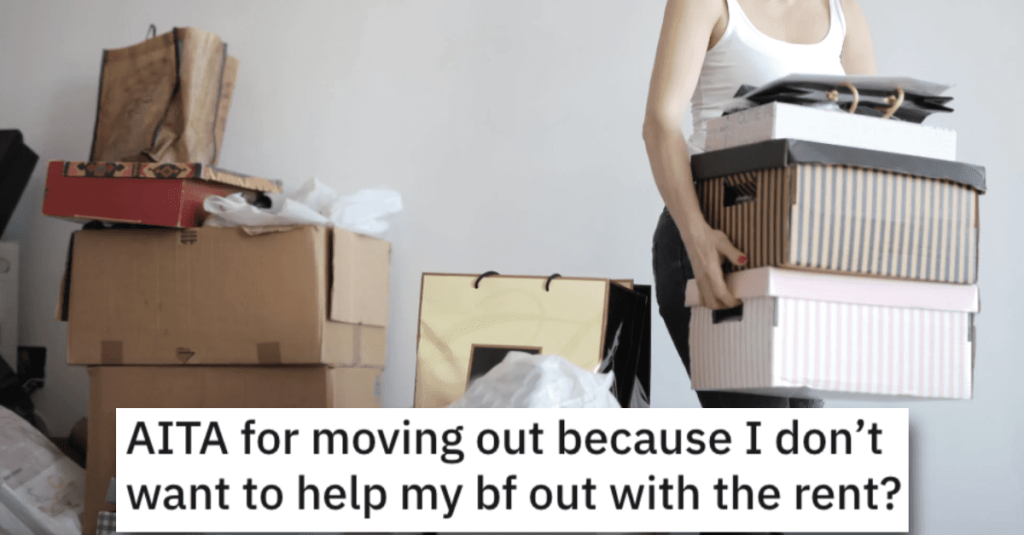 If you’re young and living with your significant other, there are going to be a lot of issues you’re going to have to work out.

And one of the big ones is finances.

Who pays for what?

And how do you split the rent if one person makes more money than the other?

So is this woman acting like a jerk for what she did because her boyfriend wants her to help out with the rent?

Check out her story and see what you think.

AITA for moving out because I don’t want to help my BF out with the rent?

We live in NYC and he makes over $200k/year, while I’m studying for my masters in social work and have no income. Right now I’m doing an unpaid, yearlong internship 3 days/week, as well as classes 2 days/week. It’s rare to get a paid internship in social work, plus internships are mandatory.

I spend 12 hours everyday either working, studying, commuting, or in class. My only free days are on weekends so I have no time for a paid job. My mom helps me financially by paying for my metrocard and healthcare expenses, but everything else I rely on loans.

Before I moved in with my boyfriend there was a roach infestation in my apartment so I’d stay over at his place a lot. My lease was ending soon so he asked me if I wanted to live with him. At first I joked with him that his living standards would go down since I can’t afford a nice place, but he insisted on paying the rent until I finish grad school, then we would split the rent based on income.

I originally wanted to live in a cheaper place in Queens or Brooklyn, but my boyfriend likes his current place and insisted I move in since he would be the one paying the rent. So I moved into his $5k/month luxury condo in the city this August.

All of a sudden my boyfriend recently started asking me to pay half the rent ($2.5k/month). I was confused because he was the one who wanted to pay the rent in full. Apparently he was talking to his friends and they all think its weird that I don’t pay rent and that I was a gold digger.

I let my boyfriend know that I can’t afford $2.5k/month and he said I was “leeching” off of him, so I told him that he should find someone within his social class so he doesn’t have to worry about a gold digger like me leeching off of him. I stayed at my friends place for a few days while figuring out what to do.

I called my mom about my situation and she is willing to help me out but the maximum she can afford for rent is $800. I found some places in Queens within the price range, less than 15 min away from the city and a bus ride away from my school so I went to check them out a couple days ago.

I’ve been texting the landlord and my new roommates and I already signed the lease. I told my boyfriend about my new place and he got upset and asked me to stay. He said that he was willing to accept $800/month instead of $2.5k/month if thats all I can afford, but I told him I don’t want him changing his mind again and demanding more money from me in the future.

He lived in this condo alone for several years so it’s not like he can’t afford to live there without my help. I wouldn’t mind splitting rent with him, but I would have to live in a more affordable place outside of Manhattan like I originally wanted.

Apparently some of our “mutual friends” think I’m being unreasonable for moving out instead of talking to him and staying by paying the amount I can afford in rent, and that I shouldn’t have let him pay my portion of the rent.”

Here’s what Reddit users had to say about what happened.

This person said they’re glad she stood up for herself and that this plan backfired on the guy.

Another reader said she’s NTA but her BF sounds like one. 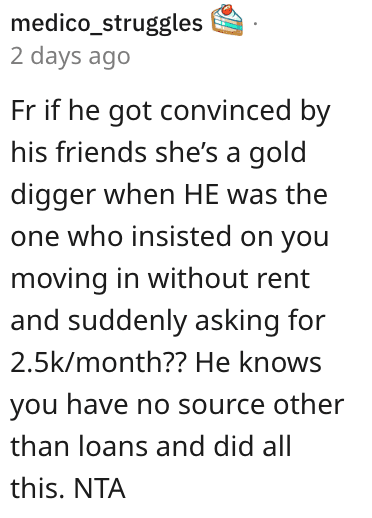 And this individual said if this woman would have agreed to this deal she would be stupid.