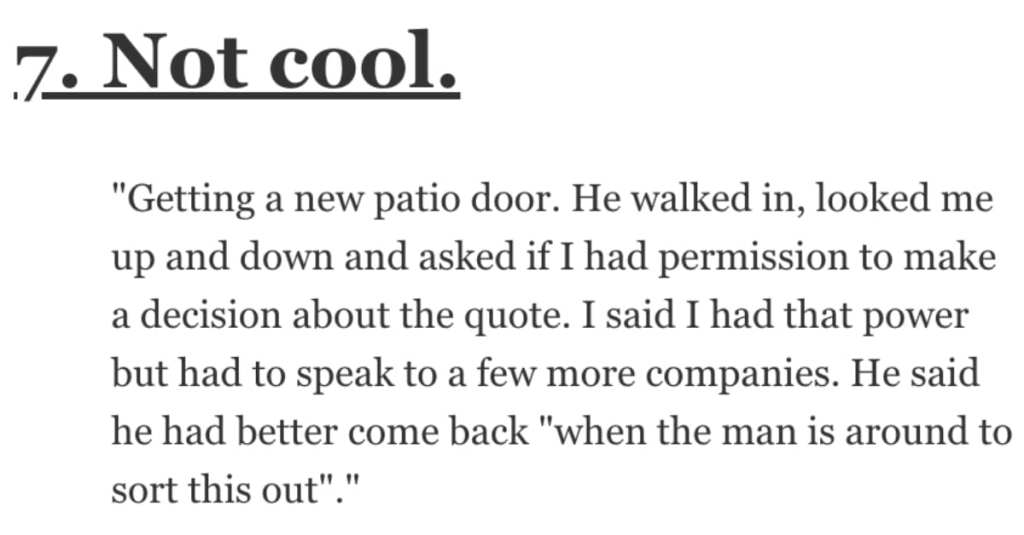 Women Discuss Their “I’m the Client, Not My Husband…So Stop Ignoring Me” Stories

I know times have changed and we’ve made some progress as a society, but we still have a long way to go in some areas, especially when it comes to women.

And these posts are proof of that…

The ladies of AskReddit shared stories about being ignored by men that I think will probably p*ss a lot of you off…let’s see what happened.

“25 years ago my husband and I are looking for our first house. He had just graduated and still had student debt. I had been practicing law and had 20k saved for the downpayment.

Real estate agent only spoke to husband, even if I asked the questions. In one house we went to look at the basement and the guy says “you don’t want to go there. It has spiders.” I told my husband I wouldn’t ever buy a house from him. Later the guy ran for office and I told everyone the story including a woman that called me randomly to promote his candidacy.

Turns out she was his mother. It’s a small thing but indicative of his attitude toward ” the fairer s*x”.”

“My husband and I were buying a new mattress.

It was a joint decision on the feel of it, but my decision for the price-point/warranty/etc because I was paying for it. In other words, all the stuff we actually needed the salesperson for.

Salesperson was a fine guy, old-fashioned, not overtly rude, but he was definitely talking to my husband more than to me (the one with the money to pay). I noticed but, eh, I’m used to it, I was going to get my info and pay the man. Whatever.

My husband, bless him, wandered away all floaty, like he’d never seen a furniture store before (weird, but ok). Then he came back and said, “Hey, can I have some money? I’m going to go check out the (insert dumb little decorative thing in the other part of the store).”

I was weirded out because I have never seen him care about a lamp enough to go examine it on his own and also we don’t… we don’t do that? But yeah, I said, sure, and handed him some cash.

The salesman IMMEDIATELY stopped paying attention to my husband. Suddenly, in his mind, I was wearing all the pants. He started asking me what I did for a living, etc and I was able to negotiate for a slightly lower price.

I love my husband so much. He knew exactly what he was doing.”

“My husband and I had our backyard completely dug up and re-landscaped when we bought our house.

The landscaper was an older guy, probably around my dad’s age, and my husband and I are pretty young to be homeowners, so I could kinda understand this dude’s condescending attitude. When he came over the first time to do the estimate he almost exclusively addressed my husband even though I’d made it clear I was the one who was doing the designing and knew what I wanted done.

When the work was done and I paid him, he kept looking behind me for my husband and almost didn’t give me the aftercare instructions for the new sod, saying he wanted to make sure it was done right so he’d email them to my husband. I finally snapped, “Give me the d*mn piece of paper, Bruce! I’m the one who will be home during the day to do the d*mn thing!” (I worked nights at the time).

He reluctantly handed it over and called my husband the next day to make sure the lawn got watered. My husband told him, “You’d have to ask her, Bruce. She told you she’d do the d*mn thing” and hung up.

“This August I bought a new truck and took my boyfriend with.

He is white and I am Mexican, we arrived at the dealership and I asked about the explorer they had front and center. Salesman comes over and is asking a bunch of questions to my bf. He told him its for me. I was ignored for the entire conversation. I got up and started looking at the truck. A Hispanic Salesman comes and asks me if I need help.

I was out of there within 1.5 hours keys in hand. Found my bf with the other salesman. I looked at bf and said I bought the one I wanted Manny G got me squared away.

The look of utter disappointment and anger on the guys face was worth it. My bf chuckled and told said “I told you she was the one buying.” Manny you were great.”

“We were buying a car for me.

Paying for the whole thing outright, but financing the minimum amount because they ran a deal that got us $1500 off if we financed through them (we paid the whole note the next month), so of course we had to sit in the salesman’s office for an inordinately long amount of time answering questions.

The salesman, who was great in every other way because he was a hands-off, no-pressure guy (we walked from several other places when they attempted to pressure us), would ask my husband the questions. My husband pointed at me and said “I don’t know, it’s her car.” Salesman said “Of course, but we all know how it goes, right?” and kept asking him.

So what ended up happening, because we both wanted to get the paperwork signed and get the hell out of there with the car but we were also on the same wavelength wondering about how far we could go with this, was that the salesman would ask my husband the question.

Husband would blatantly turn to me and repeat the question, I would answer him, then he would turn back to the salesman and repeat exactly what I’d said. Dude never got the idea that maybe he could…just ask me the questions.

On the car we bought for my husband a few years later, since we put both our names on the paperwork we both had to sign. The finance guy saw my last name was different and asked when we were getting married. And was confused when we said “Er, eight years ago?””

“Husband and I took my daughter to urgent care for stitches. Husband was holding the kid, and I checked her in at the front desk iPad.”

Front desk man looks to my husband and asks for the insurance card…. we’re on my insurance so I hand him the card. Next he tells my husband the co-pay, looking at him, behind me, when I’m the one standing at the d*mn desk.

I pull out my card with my name on it, and pay.”

“Getting a new patio door.

He walked in, looked me up and down and asked if I had permission to make a decision about the quote. I said I had that power but had to speak to a few more companies. He said he had better come back “when the man is around to sort this out”.”

I told him he wasn’t welcome back in MY house and I would take my business elsewhere.

Their follow up customer service call employee got a right earful when they rang a few days later to see if my husband and I had had any more thoughts on the matter.

Oh I had some thoughts….”

“I was invited to a weekend away with a supplier to launch their new range.

My husband went with me and on the ‘order day’ the Financial Manager of the supplier came up to my husband and asked him what he thinks about the new range and what he is considering to buy.

My husband replied very dryly that he is only the plus 1 and that he must speak to me seeing that I am the one with the checkbook.”

“When I was buying my house, I took my boyfriend with me to the viewing and realtor was talking mostly to him and even ended up calling him with bids on a house.

Yes, the house I purchased all on my own and is mine. I don’t take myself too seriously and I’m not easy to upset or embarrass, so I didn’t really care, I was riding high on a wave of winning a bidding war.”

“At work, I manage a few facility systems in our building (think air handlers, water purification, etc.) I was meeting a new vendor (let’s call him “Pat”) that was servicing one of the systems I was overseeing.

Pat had already met the facilities engineer (also a man), so this coworker was introducing me to him. Instead of talking directly to me, Pat turned to my coworker after shaking my hand and asked him, “and what does she do here?”

A few weeks later, he had the unpleasant opportunity to learn that I’m the one who calls him when his company falls through and doesn’t deliver. Needless to say, I was not overly polite about it when Pat failed to do his job.”

“Happened to my mom when we went to look at colleges.

The admissions guy opened by shaking my dads hand, constantly directed questions at my dad, and would look to him for confirmation whenever my mom said something.

My mom is defacto the money person of our family unit. She manages the family finances and investments and stuff, and was way way way more qualified to comment on things like student loans or expected contribution.

When we left that meeting she was absolutely furious that she had to basically fight the admissions person to have a normal conversation.”

If the answer is YES, please share your stories with us in the comments.

We’d love to hear from you. Thanks!