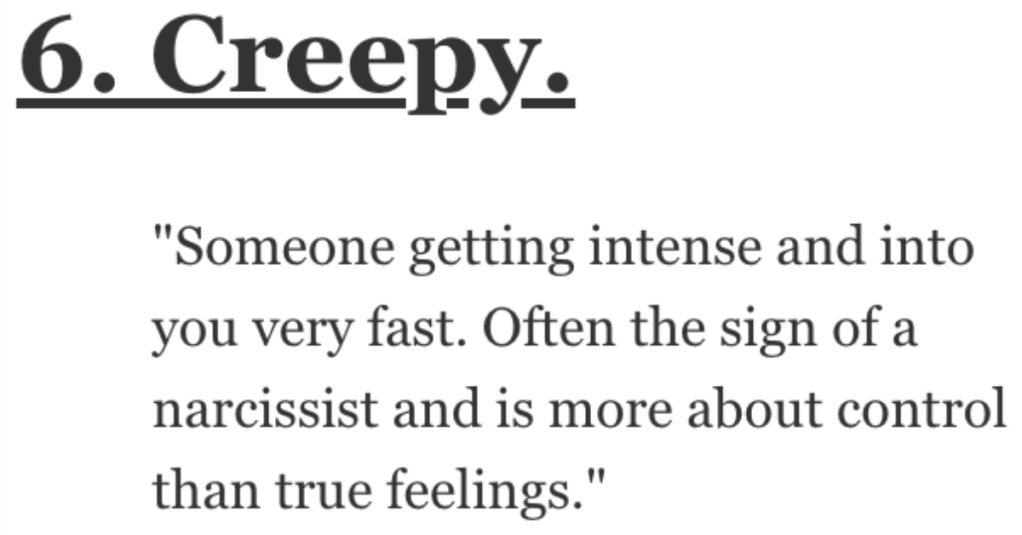 Women Talk About the Red Flags They Overlooked Early in Relationships

When you’re falling in love with someone or getting into a new relationship, sometimes you have blinders on.

You ignore things that you wouldn’t usually tolerate because you want it to work out…and sometimes that can come back to bite you in a major way.

Women, what red flags do you regret overlooking in the early days of a relationship?

“He randomly disappeared for a few weeks in the beginning of our getting to know each other stage without any warning.

I should’ve known he would do that MULTIPLE TIMES in our relationship.”

“Talking way to much about his ex.

I fell head over heels for a man who later told me he feels bad for me because I talk to him the same way he would talk to his ex, who he has told me is his “true love” and who he will “chase forever.”

Seriously RUN if this happens.

Nothing hurts more than being dumped for an ex who doesn’t even want to be with him.”

“His lack of respect when it cames to making plans.

He would ignore me for hours when I asked to make plans and would reply with “maybe”, in case his buddies wanted to do something.

He had a big case of FOMO and I was never his priority.”

“He hated me seeing my family, more so my dad.

He knew I wanted kids as well but would always tell me that “he should be family enough for me”.”

“When your partner has no friends of their own.

This will ultimately come back to bite you when your partner comes to rely on you for their social life.

Or when you find you cannot hang out with your now-mutual friends alone without the expectation of your partner tagging along.”

“Someone getting intense and into you very fast.

Often the sign of a narcissist and is more about control than true feelings.”

“Smoking weed all of the friggin time.

Like every day after work, first thing he’d do was roll a joint and smoke in front of the tv. And then more. And more…

I didn’t want to see this was his way of refusing to take responsibility for the things he wasn’t happy about in his life. Took me a long time and many tears to realize.”

It starts with the small stuff. They don’t want to contact people to sort out stuff in their own life. You generally have to reach out to them first or put in more effort to keep the conversation going. They dismiss topics that are too heavy or uncomfortable to talk about.

As you get closer things get worse. They aren’t there for you when you need them. When you’re going through a crisis they get annoyed or try to “wait it out”. You start compromising and holding in your feelings to make them more comfortable and keep them from abandoning you.

People like this are unable to be in an emotionally intimate relationship because they are guided by fear, and will do anything to escape feelings of vulnerability. They think that the only thing that will release them from their fear is indifference.”

“The way he described people based on (unattractive) physical characteristics.

I went on a date with him about a week after we met and he took me to this party where he just absolutely berated his friends TO THEIR FACES: “look out for those planes tonight, your forehead is so big that pilots might mistake it for a landing strip” was the first one.

The guy was visibly upset and embarrassed and kept telling him to stop and my ex would say “what? he loves it!”. I had to tell him to stop which was so awkward because I was only like a week into knowing him.

He continued it behind their backs, describing his friends to MY friends and FAMILY in this matter: “you know Mat? Really short, big nose, f**ked up teeth?” “Remember him? The big fat brown dude who was puking his guts out?” “The first time I saw her without makeup on I was like… she looks like a troll. What an unfortunate looking human.”

UGH it made me want to SLAP him for being so mean. There were a lot of things that wouldn’t have worked there but wow, this was so hard for me to make any excuses for. Wonder what he has to say about me now that I broke up with him…”

“The “video games trumps everything else.”

I just thought he would grow out of it.”

“I dont remember how we got on the subject but we were talking about DNA and he referred to it as deoxyribonucleic acid and then said, “bet you didn’t think I’d know what it stood for.”

Like sure, I’m cool and everything but I’m still just a normal person and I dont care that you didn’t go to university. Hello???”

“When his mom came over, he bragged to his mom about how I cooked us dinner the night before.

His mom laughed and said, “that’s great!” but when he turned away, she whispered to me to make sure to not let that become a habit. I thought it was a joke at first, but little by little, he expected dinner, then demanded it, and then he reamed me out for not having dinner prepared.

Another one was that he screamed at people – a lot. He walked through a car wash, and one of the dudes accidentally sprayed us (it was our fault because we walked behind the car and the guy couldn’t see us).

A switch went off and he started full on screaming at the guy. I’ve never seen someone lose it so badly over such a minor thing.”

Obviously in the beginning you’re still working things out but if it’s still terrible after a few months despite trying your hardest to show them what you enjoy then don’t pretend it’s not a big deal when s** is a very important aspect of a healthy relationship.

I pretended it was no biggie, because hey its just s** and now I’m married and our bedroom is completely dead.”

“He made me feel self conscious about silly things like singing badly in the car.

We were married for 16 years before I realized I’d changed too much for him and had lost who I really am as a person. I couldn’t be silly or goofy, and he thought I was stupid for liking to get little gifts for people when I’d see something that made me think of them.

After our divorce, I moved halfway across the country (TX to CA) to work on myself away from the same places I’ve always lived. I feel like me again and felt good about moving back to TX because of the healthier place I’m in now.

Along the way, I realized I was too young and inexperienced in the realm of relationships when I got married and gave up too much of myself. Never again.”

“Him saying I was a “real woman” and “different/better than his exes”.

Those comments made me feel good at the time, but then I realized it was his way of saying that actually no woman was good enough for him.”

“Unable to deal with negative emotions, being desperate to avoid them at all cost.

This led to me neglecting my own needs, because he’d take it as personal criticism if I told him I needed something he didn’t already give me.

“He didn’t like me telling mutual friends about our relationship because he was a private person.

Lots of other red flags but this was a big one.

Turned out he was living a double life but it took me 2 years and a mental breakdown to figure that out.”

“Anger issues/”having a temper”/explosive outbursts of anger when things didn’t go his way/lashing out physically and verbally when upset.

Just because it hasn’t been directed at you yet, doesn’t mean you are actually safe.”

“If the friends he hangs out with the most are a**holes, he’s an a**hole too.

“The absolute state of his house.

He blamed it on his ex and being too small and swore it wouldn’t be the same once we moved in together.

“In my abusive relationship: when he yelled at me when he found out I was a feminist.

He accused me about lying about who I was by not telling him.

I thought it was pretty obvious from having even one conversation with me and didn’t feel the need to say “I’m a feminist”. It only got worse from there.”

“The amount of alcohol.

We were young, so everyone was still in that stage of going out and partying a lot, me included, so I didn’t think much of it.

But he seemed to do it just a little more than everyone else.”

“He was an appearance guy. He wanted to appear so perfect in his social circle.

In fact, our first fight was because he invited his 2 friends to our night out without my consent (no problem) but those guys acted as if I did not exist. Then I got bored and I wanted to leave after like an hour, he took me home but he sulked like a baby!

Months to come, he would take me out and treat me like a queen in front of his friends while at home we were fighting almost every week. I got tired of the duplicity and had to finally leave him.

But if I had known, I would have left after that first fight.”

“He was 12 years older than me and we began talking as “friends” when I was 15 years old.

Looking back i think i was groomed but hey, he’s not in my life anymore so what does it matter?”

He was very romantic and charming at first, then started accusing me of infidelity and flirting with other man. Once he accompanied me to the vet because my dog was in an accident and needed surgery.

He accused me of flirting with the vet, even though the vet and I were discussing my dog’s care. He has a meltdown over it later in the evening. That is only one example. Fast forward a couple of months…I find out he was still married and I was “the other woman”. Ew.”

Do you remember some red flags you overlooked in relationships?