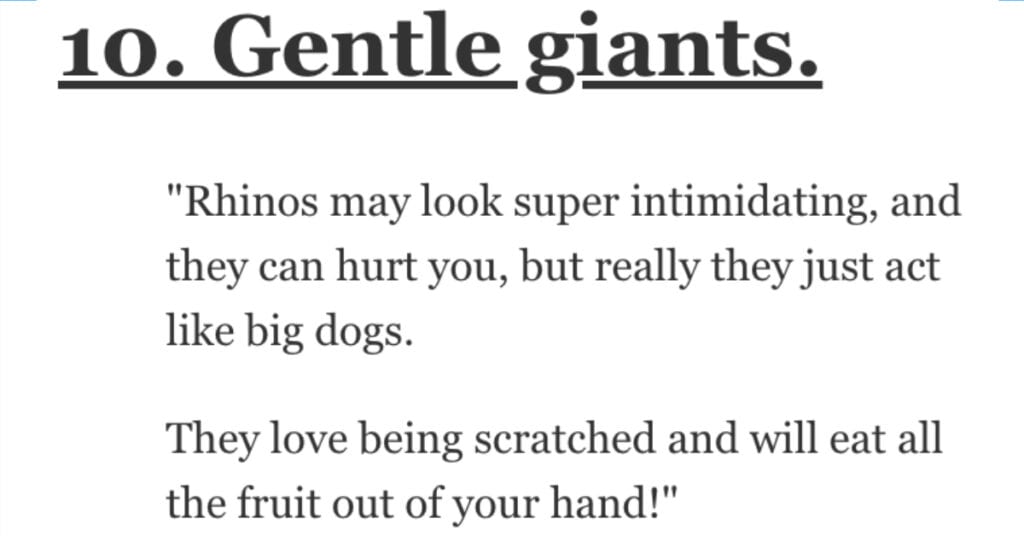 Zoo Employees, What Are the Secrets of Your Job? Here’s What People Said.

I haven’t been to a zoo in many years, but I remember loving them when I was a young lad.

And to work in a zoo? That seemed like a dream job!

But, like every job, these people deal with all kinds of stuff that we never get to see.

People who work at zoos, what are the behind-the-scenes secrets that the general public doesn’t know about?

“Some people like to bring fruit and stuff to throw into the animals cages, even though they’re not suppose to.

If you’re around and someone throws a pineapple into the gorilla or chimpanzee dens, gtfo. They will throw that thing full blast at someone.

I saw a man get hit full force right in the side of the head and he was lights out. Pineapple exploded on impact. Paramedics came and everything.”

2. Get that thing outta there!

“I volunteer at an aqurium and the people always ask about whether the sharks that are in with the fish ever eat the fish officially we say, “we keep them well fed enough that they don’t”.

But on more then one morning on my initial walk around I have found remains of fish that definitely weren’t feed fish. On a particularly memorable occasion I found the head of a large porgy just sitting on the bottom.

A diver went in and got it before guests arrived.”

“I had to draft the zoo’s contingency plan for all sorts of emergencies. Flood, tornado, extreme heat, war or attacks, you name it.

The plan included a prioritized list of which animals in the collection we would have to sacrifice to feed to the other animals in extreme situations.

I literally created a zoo food chain. Humans were left off the list entirely.”

“I wanted to mention all the older animals.

Sometimes people don’t realize there are older critters who have health issues. A lot of older fish we had were kept in the back tanks away from view because people assumed normal old fish issues were a result of poor husbandry and would get upset if they were on display. Imagine having your 17 year old incontinent dog in a zoo, people would think it looks emaciated and pathetic.

Along the same lines, zoos have improved significantly in terms of animal husbandry over the years, but a lot of older animals have been in zoos since before these changes occured.

I remember working with a group of chimps and one of the old chimps would mast**bate while staring at me as I cleaned the outside of the enclosure. I had to remember this guy joined the zoo at a time when they would dress chimps up in kids clothes and make them have tea parties and s**t. He had some mental issues that weren’t his fault.

Thankfully that troop has gotten better housing and care and has now started acting more normally, even reproducing with their own troop members and acting like real apes should.

“If you have to choose between cleaning the p**p from a flamingo enclosure or an elephant enclosure, choose the elephants.

The flamingos were by far the smelliest exhibit, and elephant p**p is heavy but comparatively odorless.”

“Lions know fully well that they can’t get through the glass.

They do that just to get attention.”

There’s a farm/zoo in the UK that uses crocodiles to get rid of d**d cows.

The owner once said he’d like the same end when he d**s.”

“The poor penguin keepers can never quite get rid of the miasma of d**d fish that envelopss them.

As for me, the stinkiest job I ever had to do was cleaning out the duck ponds.

Managed to empty a whole train carriage that evening, even though I had changed and my work clothes were double-bagged.”

“Most of zookeeping is just picking up p**p and making/delivering food.

The animal that was was least scary was a cheetah. They were pretty cool ignoring everything as long as they had food. The most scary to me were the giraffes.

Back then you went into the enclosure with them and they’d sometimes swing their heads around and try to hit you just to be pr**ks. You had to be careful.

The job would actually be fantastic if they didn’t let people into the zoo.”

“Rhinos may look super intimidating, and they can hurt you, but really they just act like big dogs.

They love being scratched and will eat all the fruit out of your hand!”

“I worked at a zoo in a northern country (can’t say which as it’ll give it away) which had a white tiger, and was quite famous for it.

One day the zoo announced the tiger had d**d of ‘natural causes’. While working there a few years after he d**d, I was told by a keeper that there was actually a problem with the electric fencing in his enclosure that the zoo managers refused to pay to get fixed, thinking it would be fine.

He was electrocuted to d**th a few weeks after they found the problem.

They covered the whole thing up by saying they weren’t sure how he d**d, but that he was old. It’s still a zoo secret to this day.”

“When I was a teenager in the 1990s, I did volunteer work at the Oakland zoo.

There weren’t many of us, so we got to choose where we helped out, so I chose to work with Bhakti, the 32ish year old Bengal Tiger. Nearly oldest living in captivity when he finally passed. I chose him because he was beautiful, and he always seemed lonely.

He had pacing syndrome hardcore, so his entire paddock was green and lush except for the paths along the outer fence line and one or two diagonals he used to get into and out of his night cage. The keepers did their best with him, but had clearly written him off. He was grumpy, unsocial, hid from the public, swiped and hissed at keepers, and ignored all of the enrichment toys and food put out to keep him mobile.

They had a few young Siberians in quarantine already waiting to be put on display, they just had to wait for him to pass and the stubborn old cat lived to spite them.

He always started the morning by pacing his fence line, so I started pacing with him. No eye contact, no sounds, just walking back and forth for an hour or two.

After a couple weeks, he started chuffing at me when I arrived, so I learned how to mimic it to say hi back.

Another month, and he would actually break his pacing circuit to walk with me, jogging his ancient arthritic ass from wherever he was across the green sections to match me.

Poor guy just needed a friend. I still get a bit misty eyed thinking about him. Just a lonely old cat who had to spend the last years of his life basically alone.

Don’t get me wrong though, the keepers really did do their best, but they couldn’t spend all day with him like I could. They had many duties and creatures to care for and he had a really steep barrier to entry as a friend.

As grumpy as he was, I still think he was good people.”

What are some behind-the-scenes secrets about your job?