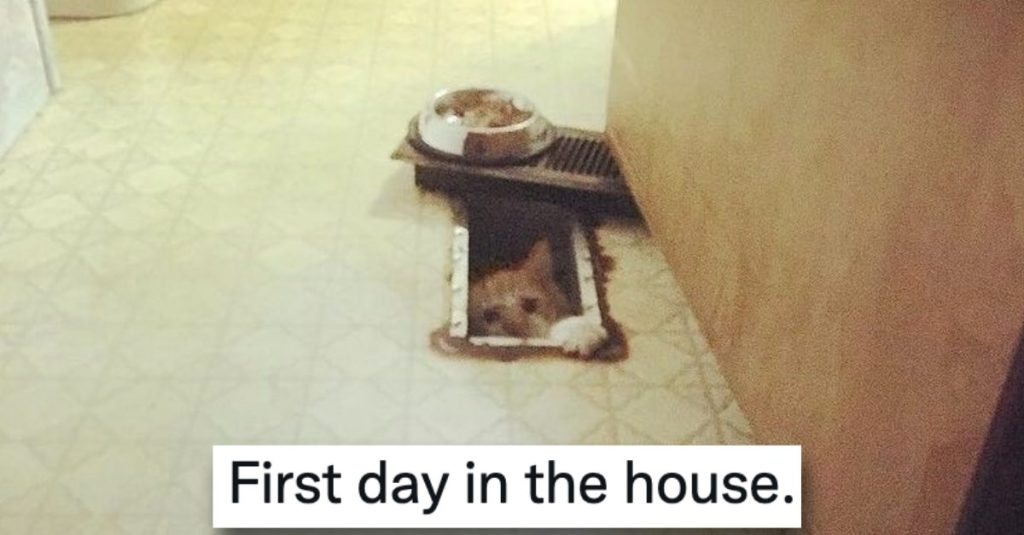 Those cats are always getting into mischief, aren’t they…?

They’re little devils, I tell ya!

And these tweets are about cats that are nothing but HOOLIGANS.

“Get a kitten,” they said, “it’ll be fun,” they said, “you definitely won’t be listening to him play under the couch and then you pull it away from the wall and he’s not there so you touch the back of your couch and it touches back because the KITTEN IS INSIDE THE COUCH”

We adopted an “adult cat”, she was 2, and she ended up inside our electric recliner after we got her home. Instead of leaving her in her “safe space” (carrier) my husband pulled her out like Simba and showed her the kingdom. The second he set her down she fled under the chair.

Every box in my house has tiny teeth marks on it. pic.twitter.com/S2l95GsClE

One of our cats made himself a little hidey-hole inside our old couch and we didn’t know. Turns out, among other things he hid in there besides himself, there was an entire loaf of bread. Which he had been snacking on off and on for like 8 months.

They have no idea, do they?

I still feel horror when I think about how this twerp hid in the fold out couch on moving day and was only saved from a horrible fate by a last minute decision to leave the couch behind and use it one last time instead of going to a hotel. pic.twitter.com/GpvC1BA1s9

Are you done yet?

One time this lil guy he was going to hide in an enclosed area under the toilet bowl in the bathroom and I couldn’t find him for like an hour. And when I finally found him, I couldn’t get him out without destroying the toilet so I just had to wait for him to come out on his own. pic.twitter.com/AiFD7m3Td9

Turns off the cpap is next level cat morning behavior. Our cat used to paw my mom on the nose, and if that failed to elicit the desired response, would go again with one single claw. ?

Up to no good.

Please allow me to present you with this photo of three feral kittens living inside a box spring. They shredded the lining with their baby claws and hung out there constantly ? pic.twitter.com/LivkQkdf2o

First day in the house. Kittens discover they can pull up the vents. Proceed to use them as a tunnel to get from room to room. This one acted as tho he had no idea how to get out, took hours to retrieve him. pic.twitter.com/Td4mlxTlAN

When we got our kittens when I was a kid, my horrible son Cloudy immediately found the 4×4 gap next to the dishwasher and had to be lured out with the juice from a can of tuna fish. He also got trapped in closets and lost in paper bags CONSTANTLY lmao

Has your cat been causing trouble lately?