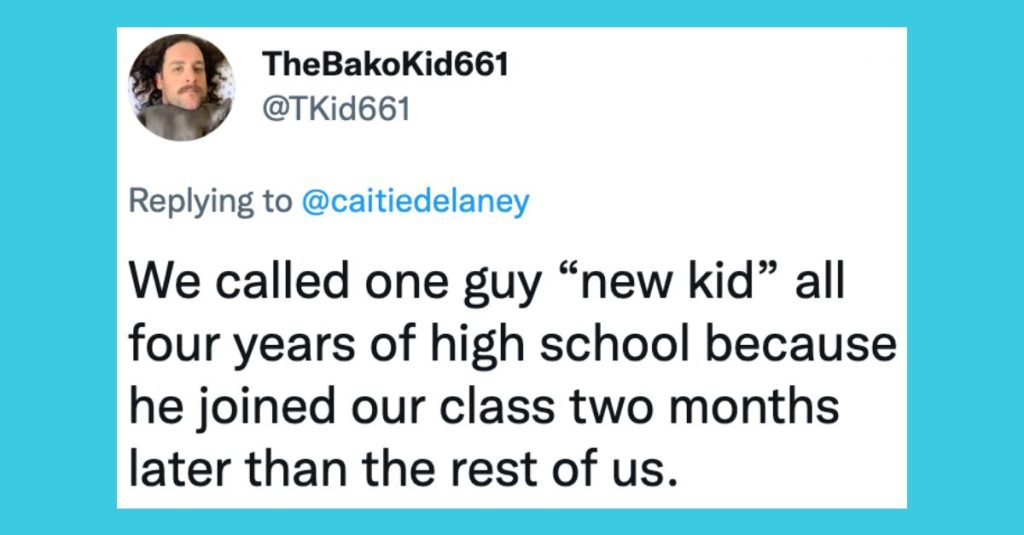 10 Nicknames People Were Given For Silly Reasons

Could be worse, I guess…

A kid came to our school. Said his name was Stephen. Someone said “we already have Stephens. We’re gonna call you Bill.”

It stuck so much that his three younger sibling were called Little Bill, Tiny Bill, and Lady Bill their entire tenures at school

We called one guy “new kid” all four years of high school because he joined our class two months later than the rest of us.

I had a buddy who got the nickname “Titty” in 8th grade because he was changing after baseball practice and a meathead noticed he had a birthmark on his nipple. We still call him that. We’re in our mid 30s and he has two children. It doesn’t end.

And then there’s Stripes.

Had a guy in a couple of my classes in college who used a wheely backpack so we called him wheels. We called his friend who he sat next to stripes because he wore a striped sweater one time

She never lived it down.

Omg, we had a girl who used a briefcase instead of a backpack and she was Briefcase Girl.

Just go with it!

First day of freshman year, my friend called a random kid “Dude”. He foolishly replied, “My name’s not Dude.” Guess what his name was every day for four years.

Which is a cinematic masterpiece.

Ha. Reminds me of our friend Meat. Guy had terrible handwriting and he left a note and the last two words on their own line were “me at” and it read like he signed it “meat”.

Just remembered this guy I went to high school with named Pants. He was called Pants because at his first soccer practice freshman year I guess it was really hot out but he wore pants. So everyone called him that for four years. No clue what his real name even was. Teenagers man

Can you blame him?

One of my brothers was called “Bagel” because… He used to bring a bagel to eat after cross country practice.

I should probably add that we were in one of the few cities in LA County that did not have a lot of Jews.