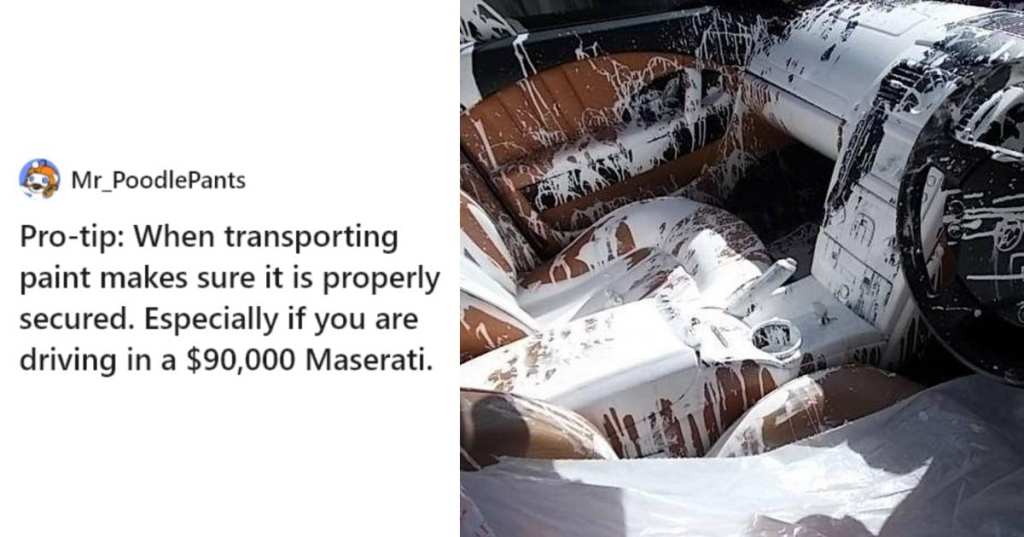 10 People Who Are Definitely Having a No Good, Very Bad Day

Have you been having a bad day? On a scale from 1-10, just how bad would you say that it is? Uh-huh. Interesting. You poor thing.

Well, not to one-up you, but I think we might be about to do just that, via a bunch of posts that Reddit people brought to the internet’s attention.

Each of these is a tale of woe Shakespeare himself could not construct on his dreariest day. It’s the kind of carnage that R.R. Martin would shy away from. It’s worse than Twilight.

Here are ten people who are absolutely positively having a no good, very bad day.

Precision is like, really important in science, it turns out.

In 2003, a technician forgot to log that he had removed 24 bolts during the maintenance of the NOAA-19 satellite, causing the satellite to fall over and costing $135,000,000 in damages. from Wellthatsucks

When I said new paint job, this isn’t what I meant.

Pro-tip: When transporting paint makes sure it is properly secured. Especially if you are driving in a $90,000 Maserati. from Wellthatsucks

So um. Are you gonna eat that?

Accidentally left my easter egg in the sun. Still sealed! from Wellthatsucks

All that glitters really isn’t gold.

Oof, that’s gonna be there for a while.

Never bake cookies in a crop top from Wellthatsucks

Hey, at least now you have your answer and your curiosity is satisfied.

Never stick your head in a hole on a tree to "just see what’s in it". from Wellthatsucks

For those of you who can’t read the fine print, the one of the right is a laxative.

I took some aspirin when I was tired it was really late at night. I realized an hour later that what I took was not aspirin. from Wellthatsucks

Go bold, tell everybody it’s the new thing, see if they follow.
Fashion is meaningless anyway.

Ever thought about hiring a cheap barber from craigslist? Think again. from Wellthatsucks

Well that’s one way to keep people out.

Tried to hang a curtain over my front door, but didn’t realize what I did until I stepped back. from facepalm

Somebody’s getting fired… from Wellthatsucks

Pretty bad days there. But also I clipped my fingernail slightly too short earlier, so, I’d say it’s an 11-way tie overall.