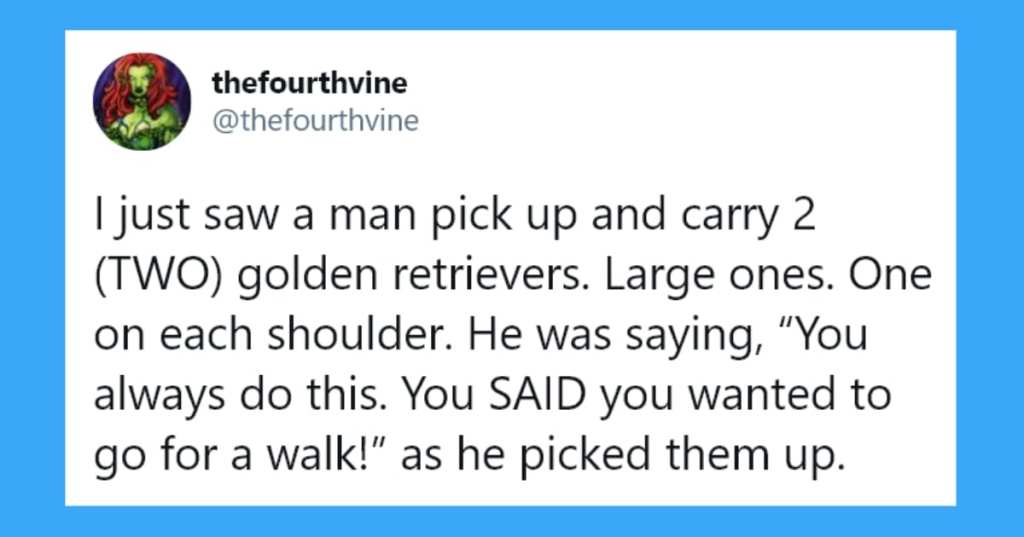 10 Tweets for the Dog Lover in Your Life

There’s nothing on this earth that’s better than dogs, and if you think there is, then you can LEAVE.

I mean you can leave this page, leave the internet, leave the EARTH, because we terrestrial beings don’t need the kind of negativity you’re bringing to the planet.

Dogs are the best. Full. Stop.

This is such a widely accepted fact of life that even the ever-contentious world of Twitter won’t argue about it. They know the score, and that score is Dogs 1, everything else in the universe 0.

10. Happy to be involved

WHAT’S HAPPENING? IT’S SO GOOD! HOORAY FOR WHATEVER!

He’s not heavy, he’s my doggo.

I just saw a man pick up and carry 2 (TWO) golden retrievers. Large ones. One on each shoulder. He was saying, “You always do this. You SAID you wanted to go for a walk!” as he picked them up.

People with no pets shouldn’t even be allowed in the White House.

I think we should line up all the presidential candidates and see which one a dog doesn't bark at. That person should become president.

Next would be “any dog past, present, or imaginary.”

It’s impossible to rank types of dogs but I think I’ve finally nailed it down
1. My dog
2. Other dogs
3. Dogs I see online

Heard you were talkin’ malarkey.

When u hear her call someone else a good boy pic.twitter.com/pk8AHfzsnf

They care not for your petty human concerns. For it is doo doo time.

Me to my dog on a walk: no no no! please don’t shit here

4. I’m so excited to see youuuuuuu!

Let’s play ALL the games! 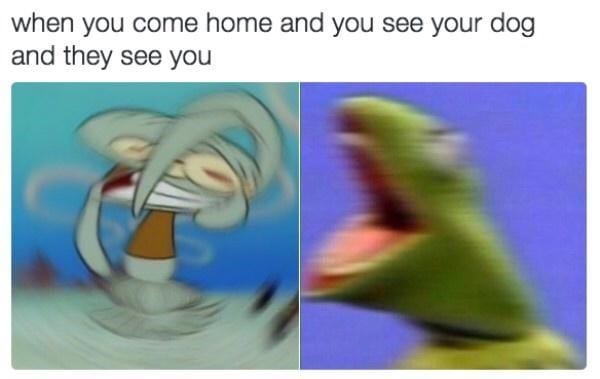 You know I can never resist a good sale.

When u put something in the cart when ur shoppin with ur mom and u hope she doesnt notice ? pic.twitter.com/8UEQiMiM6S

My dog: *kicks in the hospital door* did somebody say WALK

These Skittles ads are just getting weirder and weirder.

what did we do to deserve dogs pic.twitter.com/NkjbanT9gu

If it’s something that even the people of Twitter won’t fight about, you know it’s special. And dogs are special. They are special and blessed and must be protected at all costs. Be good to the doggos in your life.