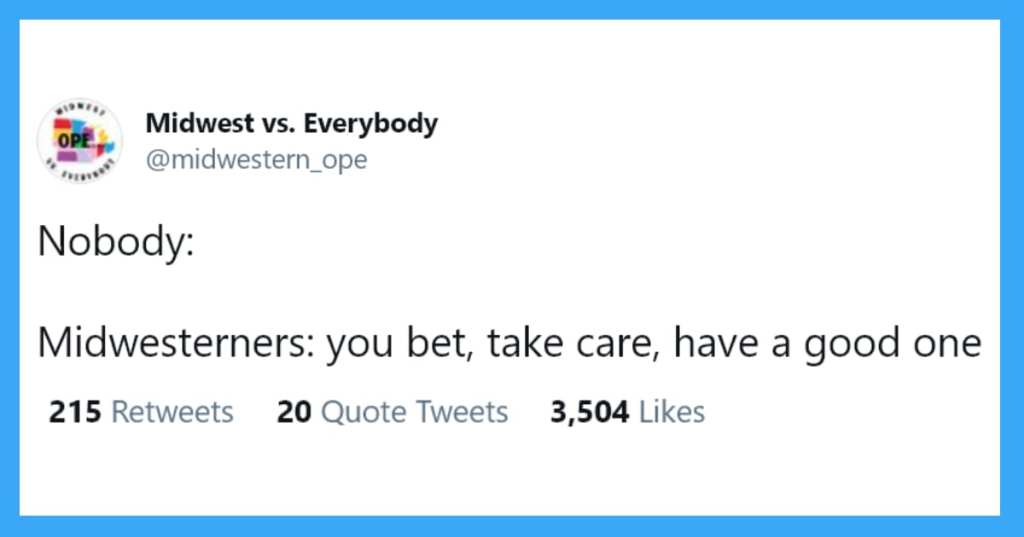 I grew up in the Midwest. Kinda right in the heart of it, arguably.

I come from Kansas City, specifically. But not Kansas City, Kansas – Kansas City, Missouri. Which is connected to “KCK” but is actually larger and generally nicer than its appropriately named counterpart, which is extremely counter-intuitive and very confusing to describe to people, and in that way it sums up the midwestern experience more or less perfectly.

Because us midwesterners have a certain way about us that’s hard to put your finger on – unless you’re this particular Twitter account. Then you kinda nail it.

When I was a kid this seemed normal, now it kinda feels like a big luxury.

It’s like a second fridge that we keep in the garage or basement and we only use it for beer, freezing meat or soup and is typically a hand me down from an older relative pic.twitter.com/p9Ha2GrI8o

I guess I could just text them, but, nah.

Ever ruined your car’s entire suspension just turning around a cul-de-sac?

Sometimes it’s just kind of a contest to see who can rack up the highest score.

Me after holding the door for 15 strangers at the store pic.twitter.com/PczPMcAg33

At least you remembered to pop out your wipers, good on ya.

Midwesterners just get in and drive because enough of the windshield and is clear https://t.co/Ylip3uDmyr

Nobody’s sure what the last thing is called but they all love it.

This really isn’t an exaggeration.

The South: all activities are cancelled for the next week, drive like you’re taking grandma to church, this could be the end folks!

The Midwest: hold on grandma I’m drifting this next turn!

It just goes on everything. That’s the law.

Congress announced the next round of stimulus will likely be a giant bottle of ranch and midwesterners are ecstatic pic.twitter.com/VRUuPrT4yH

2. The words of encouragement

Midwesterners: you bet, take care, have a good one

Rt If you read this as “Ope Nope” because your Midwest roots over power logic pic.twitter.com/ONaCMaL3wY

I’d say that’s a pretty good window into the midwestern experience. Now if you’ll excuse me, I’m just gonna squeeze right past ya there.

What’s the most midwestern thing you’ve ever done?