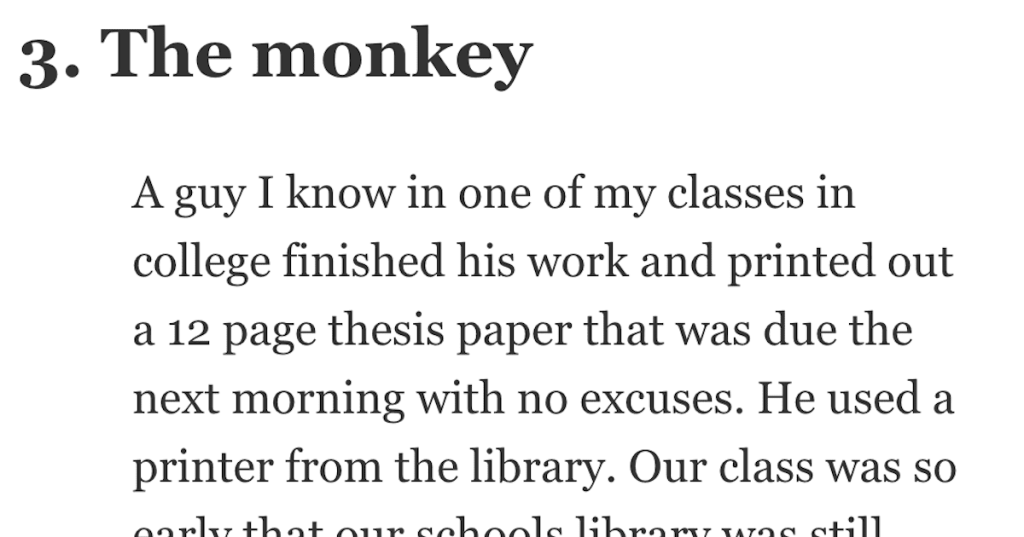 We love our teachers, but that doesn’t mean we’re always honest with them. Especially when ti comes to the dreaded homework.

And while we might laugh at kids sometimes… they can be sneaky! Because they’re not completely stupid, but these 11 excuses for missing homework definitely don’t help their case!

I used to have this little jack russell named “Rocky” that would eat absolutely everything it came across.

One evening he was chillin’ out on the couch next to me, while I was going over an english essay I’d spent hours writing in my workbook. I get up to go the bathroom, leaving my book on the couch. I get a bit sidetracked, make some food and come back to find my essay covered in dog chunder soaked all the way through, with a random bolt amongst the mess with no way to salvage it.

Next day teacher asks me where my essay is, I tell her my dog ate a bolt and threw up on it. I get kicked out of the lesson for being ridiculous. Life can be tough.

I taught math and science to a grade 7 class last year.

The work a student handed in was not in their own handwriting so I called the parents.

The dad admitted to doing the work for him because “my sons going to be in the NHL, he doesn’t need to do math and science in grade 7”.

This kid wasn’t even the best player on his rep team.

A guy I know in one of my classes in college finished his work and printed out a 12 page thesis paper that was due the next morning with no excuses. He used a printer from the library. Our class was so early that our schools library was still closed for another hour. He was in culinary (this is important).

He came in the next morning, ripped/crumpled up paper in hand. His excuse was……. his Monkey ate his homework! He never mentioned having an exotic pet before after knowing him almost a year, so we (the class) called his bluff.

He had baked a loaf of banana bread and accidentally left it in his pack along with his class work. He had a pet monkey that of course smelled the treat, ate the bread, and ruined his work in the process.

He took a video of himself stating the time and date of that morning before flipping the camera and showing the monkey having itself a great time shredding the papers. We all watched it on the main screen, had an amazing laugh, and the teacher gave him a 2 hour extension so he could reprint the paper.

A student told me she had a bad dream about her cousin taking her and her dog on a road trip in a ferrari?

I never quite understood how having a dream about a ferrari road trip made someone not be able to complete work.

As she walked towards my desk. I believe she was going to give a different excuse or at least mention a different body part but the panic overwhelmed her and she went with her back.

Both sadly and hilariously I couldn’t help but give her a “are you dumb?” face.

When I was a kid I once told my teacher, “I forgot to get around to it.”

To which she immediately scolded me and shouted, “YOU FORGOT OR YOU DIDN’T GET AROUND TO IT? WHICH IS IT!” scared the sh%t out of kid me.

7. Maybe the deserved it?

But one of my classmates came with an elaborate story of how he couldn’t do his homework because his dad had to leave that night because he was being deployed over seas and that it was short notice so a lot of helping and packing and blah blah blah other stuff had to be done the dude had it done soo well that not only did he manage to waste 10 mins of the lesson but also convince the teacher enough to even get a “Thank you to your father for his service to the country”.

Towards the end of the period, The kid gets a call to the office that his dad is here to pick him up for a doctor’s appointment.

He had to do the homework 5 times for lying

This is legit and too ridiculous to be a lie (This was from a parent at the Catholic high school where I taught at the time.)

(paraphrasing because I can’t find the original which I kept) “Please excuse the late homework. Our pet cat defecated on it.”

And yes, defecated was the word they used.

I get kids who tell me they were cutting class/came late/slept through/talked through directions so they didn’t hear the assignment/know how to do it so they don’t have to do it.

In 6th grade English class we had to do a listening exercise with a CD.

I didn’t have a CD player but I had a PS2 but the PS2 couldn’t read the disc so I told that to my teacher and she didn’t believe me and tried to prove me wrong by putting the CD into the CD player they have at school.

People laughed at me. I hated that time of my life.

The new version of this is just uploading a blank document to the online drop box and playing dumb.

Gee, professor, I’m not sure why that’s blank. How weird! Isn’t that weird? Well, here is my paper two days after the due date…

Okay kids… you really have to do better next time. Those excuses were ridiculous!