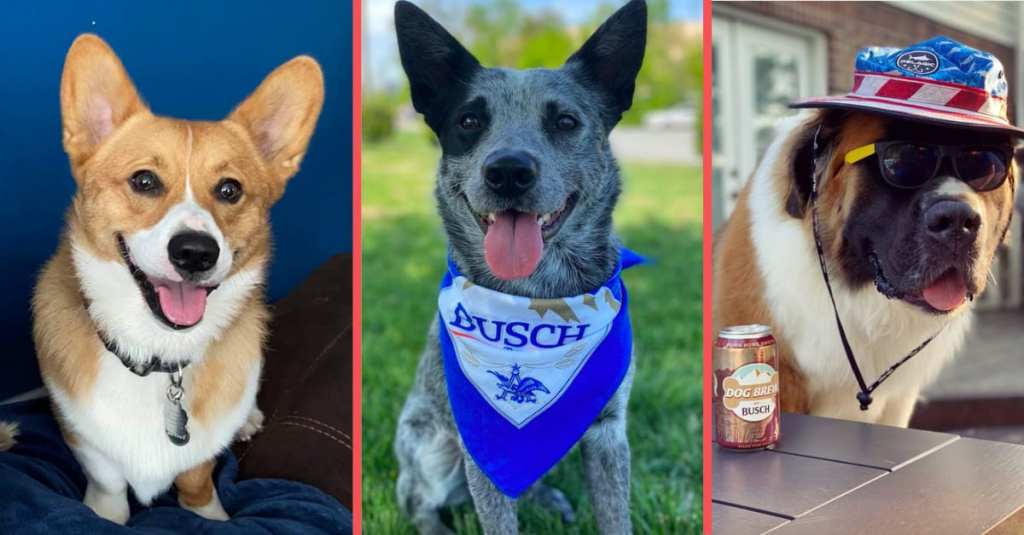 That is probably my fault. I never took her for obedience training.

When I was a kid we trained our dog to follow simple instructions: sit, stay, shake.

My current dog, bred to be a working dog, was a rescue and she’s smart as can be, but I’m pretty sure she willfully ignores me.

So I will not be submitting her resume to Busch for their new product campaign.

Busch is offering $20,000 plus benefits to the pooch who wins the gig.

What the job entails is not clear, but suffice it to say, my dog is her own person, and she enjoys being a dependent.

When the call went out on Twitter, though, hundreds of puppies (with the help of their people) applied for the job.

Here are 11 of the cutest little applicants social media has ever seen.

Even the Twitter-famous service dog threw his hat in the ring!

@BuschBeer
Dear Sir or Madam,
I’m writing to express my interest in the position of Chief Tasting Officer (CTO) with your prestigious company. I believe that I would be an asset to your team for the following reasons (a thread): #BuschCTOContest pic.twitter.com/uUXbSOOjtw

He’ll sample some product while he waits for your call.

Yo! @BuschBeer what ya'all waiting on? My boy Hank is ready to do some promos. pic.twitter.com/X8Ox5sotNB

She has perfected several different poses.

She is also almost 11, so she's definitely old enough for a brew! And she deserves it

Homeboy’s got ties to the Lou.

This is "Judge", a 3 year old Golden Retriever who resides in Raleigh, NC w/ a vacation home in the mountains. Judge has strong family ties to St. Louis and loyalty to the Busch brand. He likes Clydesdales, the Cardinals, the Arch and is a fair judge. #buschCTOcontest pic.twitter.com/SCCORJgbVX

He was named for the product he’d be selling, which he loves.
I mean, come on!

Hi yes this is Busch, applying for the #BuschCTOcontest position. Qualifications include:

Perfect spokes pup for the land of the silver arch!

Hi, @BuschBeer! My name is Lou, and I’m a year old Silver Lab. I would love to take on the resPAWnsibilities of being your professional taste-taster for Busch Dog Brew! I enjoy hanging out with my Dad when he’s drinking beer, but my paws are empty without my own! #buschCTOcontest pic.twitter.com/JSQWsTViRm

Just look at those floppy ears and imagine his head cocked to the side.

#buschCTOcontest this is Machetie & he turns 1 in July. I adopted him a month ago & he’s a sweet muscular Angel who has a very refined palette (re will eat anything) & loves his sissies & brother. He would love to be the CTO sharing his wisdom & energy w your org. Thank you pic.twitter.com/9Itjl6vxtK

Have you ever seen a happier face?

My fur baby Ollie would be perfect for this! He’s friendly, handsome, and loves a good brew! 2 year old Pembroke Welsh Corgi. The life of the pawty! He’s a good boy and loves the finer things In life, such as Busch Dog Brew ™️ pic.twitter.com/WDAUIzevx0

He even has fans who will vouch for him!

I am uniquely qualified to be your spokesdog. I love beer. I'm a connoisseur of fine sticks and have a unique ability to describe taste and texture. (#stickoftheday) And finally, let's face it, I'm handsome.#buschCTOcontest pic.twitter.com/UlO6jjMaJ0

He’s ready to tackle any mountain. Or any brew.

Meet Tucker! He’s a pup that loves to adventure. He’s taken a dip in the ocean and has climbed some mountains, but there’s nothing he likes more than spending a day at the lake! And, he of course loves to sneak a sip of my drink every time! #BuschCTOcontest pic.twitter.com/z4ZE7DP3Ko

This is Kora, my Great Pyrenees. Many of her videos have gone viral for her taste testing behavior. By fans, she is known as a sommelier, Hannibal lecter, the infamous ice cream tasting man, and the Gordon Ramsey of dogs. Stay tuned for her trying Busch Dog Brew #BuschCTOcontest pic.twitter.com/2RzJR3aooP

Those doggos are all obviously very good boys and girls, well trained and ready to take on anything.

Which one should Busch choose? Tell us your favorite in the comments.