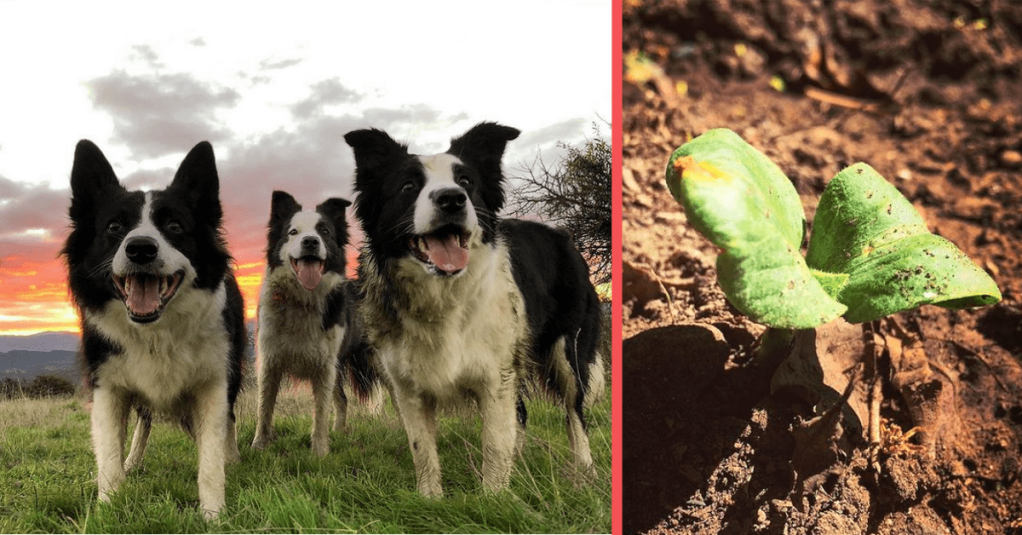 When we first met ours at a rescue shelter, she was so excited she raced around the yard in circles like a cartoon Tasmanian devil.

That combination of energy and intelligence makes Border Collies the perfect breed for a very special and unexpected environmental task.

They live in Chile, where in 2017, fores fires decimated the landscape.

TreeHugger.com described the fires in El Maule in stark terms:

According to Green Matters, the damage was estimated at $333 million, but the loss of trees and their impact on the environment as a whole is likely immeasurable.

It will take decades to regrow the forest land–but first, new trees must be planted.

Together, they train the dogs to race across the forest floor wearing backpacks full of native seeds, which they purchase with their own money.

As the sheepdogs run, the seeds spill from holes in their special doggy bags, and spread out where they can begin to take root and regrow the once-lush environment.

A post shared by Summer The Border Collie (@summerbordercollie)

It may seem like work to humans, but for the dogs, it’s just a raucous good time.

In an email exchange with Mother Nature Network, Francisca explained:

“They reeeeeally love [it]!! It’s a country trip, where they can run as fast as they can and have a great time.”

And when their bags are empty, the dogs return to their owners for treats and cuddles, and a refill on the seeds.

It’s quite the sight, to see the dogs bounding through the scrub.

And it’s a good thing they have so much energy. According to Green Matters:

This system is also more efficient than having people spread the seeds manually. These speedy canines can race through a forest and cover up to 18 miles a day. Humans, on the other hand, can only cover a few miles each day. These pups can scatter over 20 pounds of seeds, depending on the terrain.

They may not be able to cover the entire forest, but the work these very good girls are doing is already paying off.

The BBC even did a story about them:

It seriously blows my mind to think that two women and their gorgeous pups are changing the world all by themselves and in such a big way.

This Earth Day it makes me wonder, what more could I be doing? What about you? Did your heart just grow three sizes like mine did? Let us know in the comments.