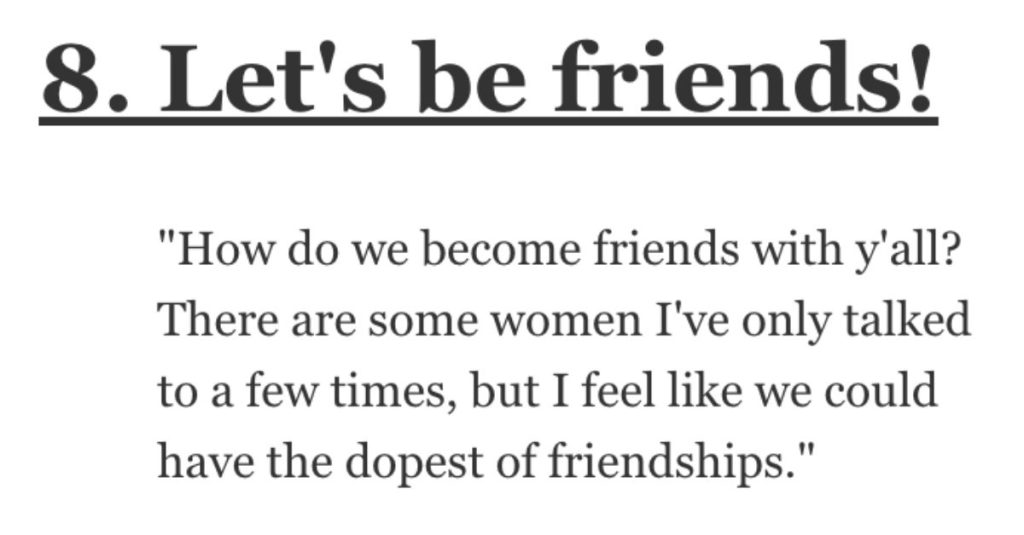 Let’s face it: guys have a lot of questions they’d like to ask women but they just don’t have the guts…

And the same is probably true for the ladies in regard to the guys!

But today we’re gonna hear from guys about what they’ve been wanting to ask women for a while.

And, as an added bonus, we got answers to these questions from women!

Let’s see what these folks had to say.

“When you’re platonic friends with a man, do you want to be treated exactly how he treats his male friends (in terms of tone, the inside jokes, and the way time is spent), or is there an expectation to be treated differently as a woman?”

Answer: “I just want to be approached naturally, and not much differently than you would approach a male friend. In my personal experience though, I do expect more boundaries when it comes to s** jokes or physical contact. Otherwise, please treat a female friend like any other friend and respect what she says she is comfortable with.”

“With periods is it a gush, a small leak, or more of a drip every so often?”

Answer: “All three. And sometimes, it’s a clot, which feels like you’re passing a hot slug through your orifice. Periods are fun.”

“How uncomfortable is it to wear a tampon? How do you know when you have to change it?

Do you get some internal sensation that lets you know when it’s time to replace it? Do you time it? How do you know?”

Answer” “If you feel a tampon after insertion, something is wrong. The rest is trial and error, but you can’t wear a tampon longer than eight hours. Most of my friends make that six hours or less to be safe.”

“Do women put deodorant in their boob pits?”

Answer: “Or powder of some sort, yes. My underboobs sweat a lot.”

“Do you have ‘crushes’ on random people you encounter that you don’t really see anything developing with?

Like someone you see every day but don’t really talk to for whatever reason? Like, ‘My barista is insanely hot, and I fantasize about him even though absolutely nothing is going to happen because of several very important reasons.’

I assume this happens, but have always wondered if it’s more common with men.”

Answer: “There’s an older handsome guy in my neighborhood who rides a motorcycle. I do not know him; I know nothing about him. I sometimes find myself saying, ‘Hi daddy,’ when he rides by.

That’s not even something I say! One day, he had a lady on the back of his bike and I thought, Who’s this b**ch? I’m not a jealous person at all. I don’t know where this impulse came from.”

“Why is it that when I get excited about a subject I’m passionate about, I sometimes get accused of mansplaining?

Sometimes, I just really like a subject and want to talk about it. I’m not being a d**k; I just suck at social cues, and unfortunately most guys suck as well.”

Answer: “Ask us, before you go off, how much we know. Or say something like, ‘Tell me if you already know any of this,’ so they won’t feel as weird telling you, and you can just skip to the next point you were going to say.”

“What kind of common behavior makes a guy seem creepy or unattractive?”

Answer: “Throwing too many compliments right off the hop. You can easily turn from a good, nice guy to a creep in less than five seconds.”

“How do we become friends with y’all?

There are some women I’ve only talked to a few times, but I feel like we could have the dopest of friendships.

Like no romantic stuff or couple stuff, but like, ‘We can play Super Smash Brothers all day!'”

Answer: “You’ll be surprised how much we crave strictly platonic friendship with a guy, because most of the time men end up having ulterior motives.

Just treat us like your friend, and hope you don’t get misunderstood.”

“How did you deal with going from looking like a child to getting s**ual attention in a rather short period of time?

Did you expect it?”

Answer: “Girls receive s**ual attention before they understand what it is. We have to catch up mentally to what is happening.

When you’re too young to understand, it can feel nice to get attention, especially as boys tend to get more attention at school up to that point.

But as you learn to understand why you’re getting the attention, what those men actually want, and how little you could do to stop them if they decide to just take action, it becomes frightening.”

“Why do many women have an overabundance of pillows in their homes?

Couches, beds…I get having one or two for comfort, but I’ve seen women with over five pillows.”

Answer: “For me, it’s mostly for added and flexible comfort. In my bedroom, I have different pillows for different places and sleeping positions — large ones for sleeping, smaller for the neck when sitting up, or between the knees when sleeping, etc.

On the couch, I have them to put behind my neck, on my lap, to prop things up, for sitting on the floor by the coffee table, lying sideways, or just snuggling one for warmth while watching a movie. You’ll always find a use.

“Do you randomly get s**ually aroused in public for no reason at all like men?

And if so, does it go away quickly?”

“How weird or unsafe do women feel if a man is walking behind them in some silent area?

I have internal panic attacks thinking that I’m making women uncomfortable when doing this, and usually just walk faster until I’m ahead of them, but sometimes overtaking might feel like a direct attack from behind, so there’s that worry, too.

What would women prefer men do in such situations?”

Answer: “A guy once called out to me, ‘Not following you, I promise, just at a really awkward distance behind.’ I appreciated that.

Often our heads go into overdrive when we’re alone, so giving us any kind of signal or message takes things out of potential panic mode.

Also giving a lot of space while overtaking, so you’re not right next to her as you pass, is reassuring.”

Okay, fellas, now we want to hear from you.

In the comments, tell us what questions you want to ask women but never had the guts to.