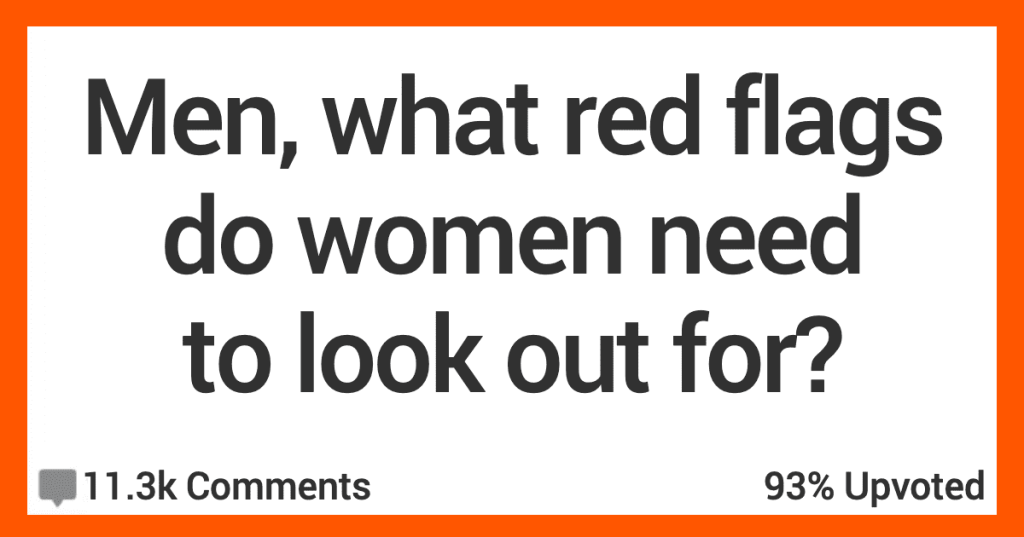 Today we’re going to hear from men on AskReddit about what they think are red flags that women need to look out for in men.

We don’t hear about this very much, so this will be interesting and informative.

Read on to see what men had to say about this.

“Pretty much anything you look at and think, “I can fix him.”

Or relatedly, “But he won’t do that with/to me.”

“If he has holes in the drywall.

3. Not really an apology.

“Keep an eye out for insincere apologies.

“I’m sorry YOU feel that way” or something similar is not an apology.”

Then, once called out on it, backpedaling, apologizing for it and then DOING IT AGAIN.”

“Beware when someone complains about everything and is seemingly the victim in every situation.

This is the type of person that will very quickly blame you if anything goes wrong, and is likely sh**ting on you to other people already.

Secondly, it means you will be perpetually drained by the negativity over the long haul.”

“If he doesn’t respect your boundaries…

If he doesn’t respect consent…

If it looks, smells, and waves in the wind like a red flag, treat it as such.

It’s not worth the risk.”

“Suddenly flying off the handle at a minor inconvenience.

It’s one thing to stub your toe at the end of a bad day and give the table a whack. It’s another if every moment of stress or misfortune triggers rage.”

8. Smiling up and kicking down.

People who ‘smile up’ and ‘kick down’ are the worst.”

“Telling you that you’re being jealous, when they’re intentionally creating situations which would cause that.

Continually describing past experiences with girls and how aspects of that were better than what my friend had with him currently.”

“If he talks about his ex too much.

As someone who was in love with an ex for way too long, I was not ready for a relationship with anyone else.”

“S**ual pressure after you directly reject an advance.

Healthy people with your interests in mind only need to hear no one time and are respectful of boundaries if they bring it up again in the future.”

“How he handles it when he’s better at something than she is.

Does he win with some amount of grace or does he gloat?”