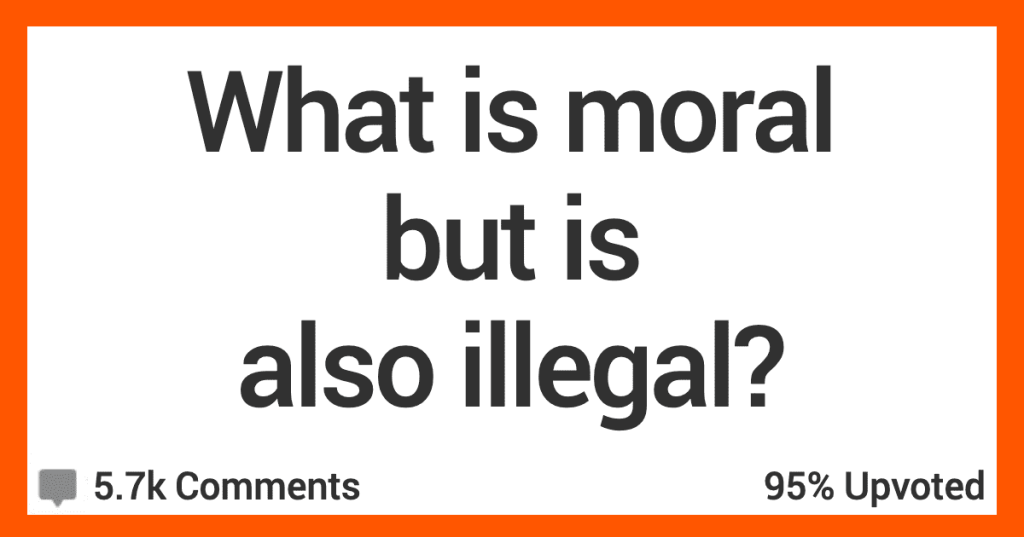 12 People Talk About Things That Moral but Illegal

What do you consider to be moral…but illegal?

There are a ton of possibilities, so it will be interesting to see how AskReddit users responded to this question.

Also, if you park in a spot that still has some time left on the meter, you’re still supposed to pay.

“You can be charged for a DUI for sleeping in your car while intoxicated.

My dad had one of these for jury duty recently and he upfront told them he thought that law should change because it’s much more responsible for the person to sleep it off instead of driving.”

“Self defense by proxy (stepping in to protect someone else who is unable to protect themself).

“When I was an RA in college, we were explicitly told to never touch someone if we found them passed out d**nk.

Even if they were in danger (ie: face down in their own vomit). We as students had MANY questions for the staff, and it boiled down to being a liability. It was hammered into us to not interfere, even if it meant someone could d**.

I know several RAs who helped move students to a safer location when they were intoxicated. They lost their jobs.”

It just doesn’t sit right with me when someone has a terminal illness, they know they’re going to d**, painfully in some cases, they cannot choose to avoid all that.

The laws say they have to endure it all. It’s just not right.”

I miss when everything wasn’t subscription-based.”

It is also a way to control the flow of water for farming, which is why I believe the laws are mostly in place for.”

“MLK and Gandhi did civil disobedience to protest unjust laws.

I think that would count.

For it to be effective, it can’t be the response to every bad law, but I believe their situations justified it.”

Or just getting an a**rtion period…”

“Stealing food if you are starving.

Other countries have refused to throw people in jail because they were in danger of dying if they didn’t.”

If it’s legal, everyone is tested and protected, and fully consenting… I think it’s moral and shouldn’t be illegal.

I’d argue the illegality of it is what causes most of the problems for those that do it.”

“Defending yourself against a bully in school.