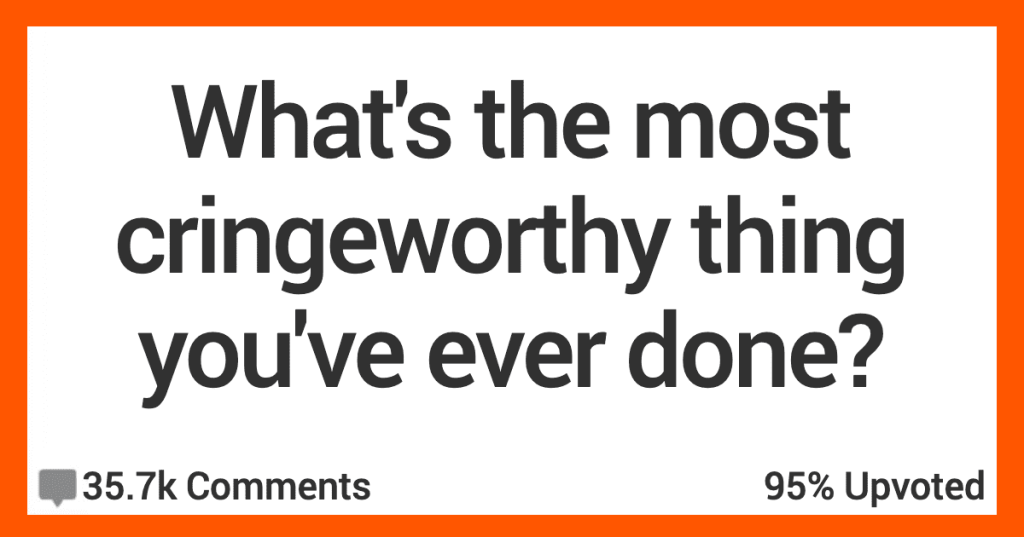 12 People Admit the Most Cringeworthy Things They Ever Did

I don’t think I have the mental fortitude to get into my most cringeworthy experience from the past.

But you’re in luck today because we’re gonna hear from folks on AskReddit about the most cringeworthy things that ever happened to them.

“I was in my mid-20s, working in a professional office environment, and my coworker was bragging about his wife finishing a marathon for the first time.

And I meant to jokingly say “Only 26 miles?! I do that every morning heuhehuehehuheuhe” (because at the time I could barely run 1 mile and people knew it) but somehow my idiot brain translated that joke into the words — “26 miles?! What a LOSER!” instead.

For extra cringe, my voice cracked like a 13yo boy going through puberty when I said the word “loser”. Everyone gave me a disgusted look even as I tried to backpeddle “haha kidding! kidding! That’s awesome” and yeah there just wasn’t any recovering from that s**t. I just had to wait until people forgot.”

“I once made a foolish “mama joke” to someone who, unbeknownst to me, had just lost theirs.

It was in High School and I had no idea why the person went d**d silent and didn’t laugh till days later when I found out..”

“I asked my old coworker what made her decide to get a tattoo on her chin because I had never seen one.

I was intrigued. She responded with, “chin? It’s a neck tattoo.”

She was super offended abd that wasn’t my intention. In my defense, her neck and chin were kind of the same thing. I still think of it years later.”

“Way back when I was a college freshman, I was emailing back and forth with my best friend.

I had this INTENSE crush on this dude, and tried to attach an email from him to the one I was sending HER, and — yep — sent it to him instead.

There were MULTIPLE. PARAGRAPHS. About my feelings. About his eyes. And your typical “he said X and I just wonder if that means Y”.

I realized JUST after I hit send (no takebacks back then).

I coped by unplugging my iMac(?) then went outside my dorm house and lay face down on the sidewalk going “nononono”.

God I feel sick. I might still be on the sidewalk even now.”

“At my like tenth or twelfth birthday party (I’ve been working for decades to block this memory out), me and my male “cousin” (just a close family friend’s kid) told our parents we had s**.

I genuinely have no idea why. We thought it would be funny I guess. It was not funny.”

“In high school I went up against a guy twice my size in a game of Bloody Knuckles.

If you don’t know, it’s a game where you take turns punching each other’s fist until someone taps out. For some reason, I thought this would be a great way to show off to another guy I had a crush on.

I wound up breaking my hand. The crush was not impressed and pretty much ignored my existence the rest of high school. In a turn of events, 10 years later, he’s now one of the groomsmen in my wedding. Turns out he was a good childhood friend of my fiance, and now a good friend of mine.

My fiance thought this story was hilarious, and we told it at a party. Our friend doesn’t remember it, but we laughed about how f**king stupid I was, and all the dumb things we all did as teenagers.”

“Barking like a realistic dog in public and at school when I was 16.

“I was not a good patient at the dentist so I got laughing gas and I wasn’t aware it was truth telling serum essentially so I was high as a kite and suddenly felt the pressing need to declare my undying love for my celebrity man crushes right then and there.

Loudly. The dentist was dying and I was really mad and told him I was serious, I loved them. It seemed very important that I tell this.”

I was at a house party for one of my dads colleagues. Dude had kids coming out of his ears. It seemed like 15 of the kids were his (I think in reality only 5 were his lol) I was about 7 and I was running around with them and they took me to their older brothers room (teenager).

He had a car lamp and I tripped over the power cord and it broke. Old mate had the cord running across the middle of the floor so like.. it wasn’t exactly like I was intending to trip on it I just didn’t see it.

As us young kids were panicking he suddenly appeared and he went off. Yelling and swearing at his siblings because they weren’t allowed in his room and now they’d gone and broken his funky car lamp.

I was absolutely terrified of him but the guilty side of me couldn’t let hin keep yelling at them so I stepped forward and loudly exclaimed.

It was I? What kind of dumba**, overly formal confession. I felt like a pompous idiot questioning my word choice and he calmed right down and was like “oh don’t worry mate it was an accident but these little s**ts know they’re not allowed in here so I was pi**ed.”

Every now and then I’m sitting there and my stupid 7 year old voice intrudes on my thoughts.. “It was I”.”

“When I was about 13yrs old in high school, I wrote a secret admirer letter to a crush I had and put it in his bag.

Nothing ever happened about it but I cringe every time I think about it. I was definitely one of those weird chicks in high school.”

“My incredibly talented nephew was complaining about how his voice isn’t good enough to be a famous musician/singer.

I had attended every performance this young man ever put on and showed support in every way that I could. His voice is phenomenal… but instead of saying that… at the family Thanksgiving… in front of EVERYONE… what I actually said was…

“Look at Taylor Swift… her voice isn’t great and she’s famous. Johnny Cash, his voice kind of sucks, but his voice is iconic… you don’t have to be good to be famous.””

“I was parked at a busy bottleo with my mate incredibly hungover, I parked next to a guy who also just got there. We were still in my car as he was walking in when I noticed his car was slowly rolling backwards!

I SCREAMED out to him from my window, STOP QUICK YOUR CAR IS ROLLING!! Everyone turned to look, he laughed then calmy replied ‘nah mate your handbrake isn’t on’

He was right, it was my car rolling forwards.”

If so, lay ’em on us in the comments!