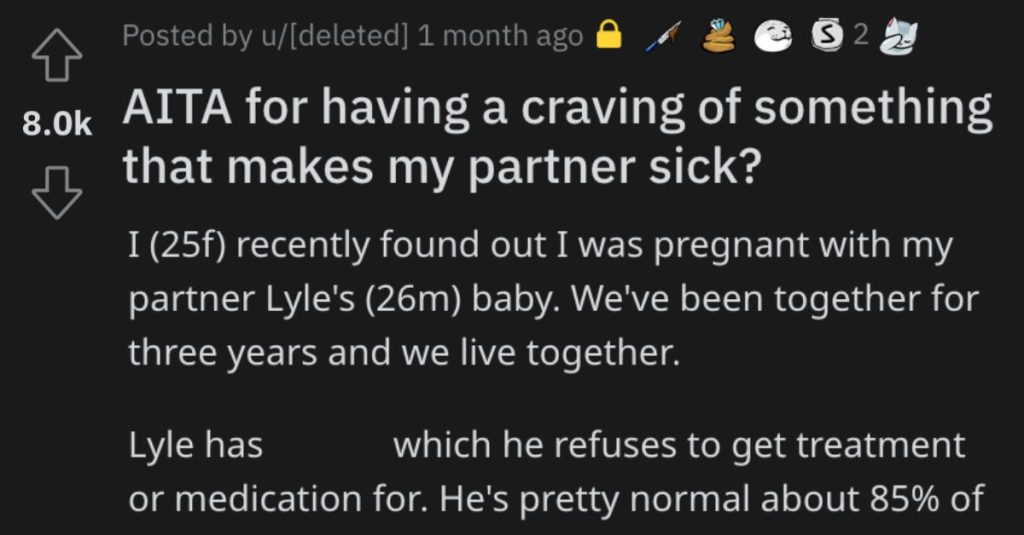 She Has Cravings for Food That Makes Her Husband Sick. Is She Acting Like a Jerk?

This is the most obvious statement of all time, but here it goes: when women are pregnant, they are incredibly hungry and they have cravings for specific foods…

But this pregnant woman wants to know if she’s an a**hole for having a craving for a certain food that makes her partner sick.

Read on to see what you think.

AITA for having a craving of something that makes my partner sick?

“I (25f) recently found out I was pregnant with my partner Lyle’s (26m) baby. We’ve been together for three years and we live together.

Lyle has ADHD, which he refuses to get treatment or medication for. He’s pretty normal about 85% of the time, so I haven’t really pushed it. One thing that really affects him though is sensory problems.

He has a few, but the biggest one is bananas. He cannot stand the smell of a banana or the taste of banana. He’s accidentally eaten something with banana before and ran to the bathroom like a child to throw it up. If we are somewhere and someone is eating a banana, he will claim that he can smell it in the room and make us move with the threat that he will get sick.

If we don’t move, he will start gagging, make himself throw up, and I’ve seen him start shaking too. This has happened in public before and its extremely embarrassing.

Anyway, let me tell you what happened. I was really tired, pregnant, and hormonal yesterday and while I was watching my show I had a craving for a banana, which I normally avoid when around Lyle, but pregnancy cravings are just too strong to resist.

He was going to get groceries from work, so I called and asked him to get me some bananas because I was having a craving. He started begging me before he even got them to not eat them in the house, and I just got fed up and told him no, that I was carrying around his child, and the least he could do about it since he’s not the one having to nurture the d**n thing in his stomach was get me a banana.

I’d read online that this was probably the baby’s way of telling me its deficient in potassium, and that all I could really stand to eat at this point was the d**n banana, and I don’t want to deprive it of what it needs. He argued back and forth asking me to go eat it outside at least, and out of frustration I just started crying, which made me feel embarrassed. He finally gave in to calm me down and brought it home.

I’ll admit, I was still really mad and upset from our argument on the phone when he came home, and I in that moment couldn’t face getting up and going to the kitchen. When he came into the living room and sat on the couch, I asked him to peel it, cut it, and bring it to me.

I really didn’t think that was a big deal, but he blew up at me and told me that I “knew” it made him “sick” to even smell or touch. I told him that plenty of people have foods they don’t like, and he either needs to grow up or seek help for his illness because he’s acting like a child and his problem with bananas is completely abnormal.

We argued a bit more, and he finally got up, yelled that he was “tired of my bulls**t”, and left the house. He hasn’t been back yet.

I get his issues are a sensitive topic for him, and when I was talking to my friend about it, she said she had an autistic sister and what I did was a bit messed up.

This person said she’s an a**hole for what she’s doing. 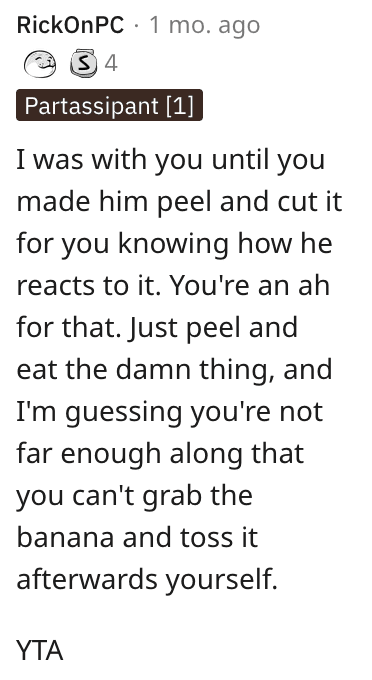 And this Reddit user also said she’s an a**hole and she’s petty.

Another individual said her behavior is TOXIC. 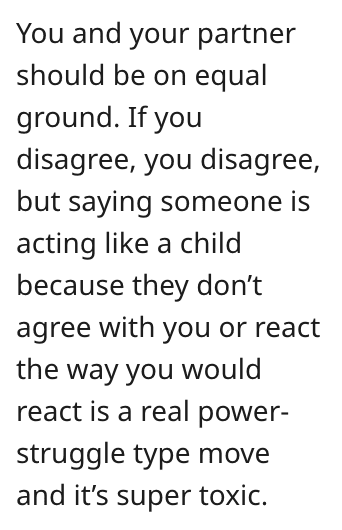