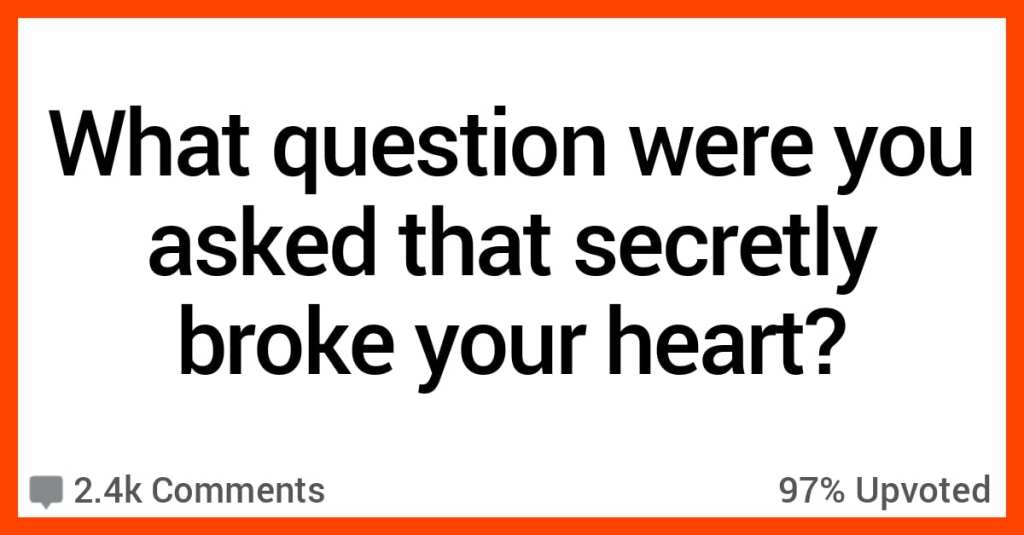 The human experience is full of highs and lows.

Actually, I should say BIG highs and HUGE lows.

But sometimes you have to keep those lows and heartbreaks to yourself for the sake of the feelings of others and your own.

AskReddit users talked about when someone asked them a question and it secretly broke their heart.

“I finally got out of an abusive relationship after many years.

When I finally did my mom said, “you’re a hard person to like and nobody else will love you. Do you really think you deserve better ?””

“We had some kind of talent show in elementary school and and all the parents sat in the gym and watched us.

Everybody had someone there except me, so this kid in my class asked where my family was and I just shrugged my shoulders and he asked “Doesn’t anyone love you?” and I had to excuse myself and cry in the bathroom, because I knew he was right, nobody loved me.

I had tried to keep it a secret and I was terrified that everyone at school would know.”

““Can you imagine how bad it would have made us look as parents if you succeeded?”

Told to me by my mom as she was taking me back home from the hospital after my s**cide watch.”

“I was having fertility problems and couldn’t get pregnant after 4 yrs of trying.

A child once asked me “Do you think there just aren’t any babies who want you to be their mother?””

“”Is this what a real family look like?” My best friend grew up in a rough neighborhood getting beaten up by his dad and abandoned by his mom.

He knew very little of normal family interactions, hygiene habits, morals (he was ok with lying, stealing and some more) and had almost none of the common sense you’d expect from a 14 yo boy. Still, he was a funny and rather charismatic SOB and it was basically instant friendship.

After spending a lot of time in our house (initially 2-3 days a week, getting to whole months during some tougher times), he got a pretty good hang of all the family and the “living in society” thing. Simple stuff like being kind, not stealing, washing his clothes and using deodorant. When he asked me this question, some months after meeting my parents and sisters, it broke my heart to the point I cried like a baby in front of him.

Now, almost 10 years later, he calls my parentes “Mother” and “Father”. He’s getting a major in History and wants to teach. Unfortunately he still struggles with some psychiatric conditions, like depression and anxiety, but is under treatment and getting better.”

“I was at Coldstone with my friends who are married. I ordered my thing and went over to the cashier and they asked me “Are you alone?” and for some reason it just cut deep.

They didn’t mean anything by it, but in that moment I realized that I felt so alone, even surrounded by friends. Then I had ice cream and felt better.”

I worked as a music teacher, and had a 15 year old student who originally came from an African country play a passage incorrectly on the instrument repeatedly.

We only had one instrument of the kind she played, so I reached out my hand and asked her to hand me the instrument over to show her, when she saw me playing, she asked me that question with genuine confusion, and I realised what hell her school life in her home country had been.

She not only thought I would hit her for not playing correctly, but also that she deserved it.

I felt like crying when I got home that night.”

She was an outcast in hs and I guess I kind of was too even though some of my friends weren’t. She was nice enough but because she was poor and had ill fitting clothes and anxiety. Other kids didn’t know how to talk to her and some of them were mean.

Last I checked she was selling Avon and in a bad relationship. I really hope she got out, I’ve lost contact with her since then.”

“I don’t really have any close friends. It’s depressing.

On my 25th birthday, my husband and I went to dinner and we happened to run into my husbands co-worker and his wife, so we sat together for a couple drinks.

My husband said it we were out for dinner for my birthday. We were making small talk and the other guys wife asked “where are your friends at?”

I felt so embarrassed. My face gets red and my heart sinks every time I think about it.”

“We were watching the movie The Martian.

About 3/4 of the way through my GF turns to me and asks if this really happened.”

This was earnestly asked to me on the playground when I was 13. I was very chubby, and had grown out my hair (my dad had a cool ponytail, and I wanted to be like my dad). But puberty hadn’t really kicked in yet, so I guess I looked pretty androgynous.

I told the girl that asked I was a boy, and she nodded and walked away, returning to a friend who then cheered in triumph, I guess they won the bet.

That messed with me for a while.”

“I moved away for almost a year. The day I moved back to my home town, I excitedly went to my old martial arts dojang to see if I could sign back up.

Long story short, I loved these people like family. Upon entering the building, I was glared at and cold shouldered. I went back outside, thinking maybe I interrupted something. The head instructor came out and I greeted him enthusiastically. He said, “Oh. You’re back…?”

He turned around and left. I had two other heartbreaks in a similar fashion before I decided I had more self worth than what these people rated me for and moved on.”

If so, please tell us about it in the comments. Thanks!