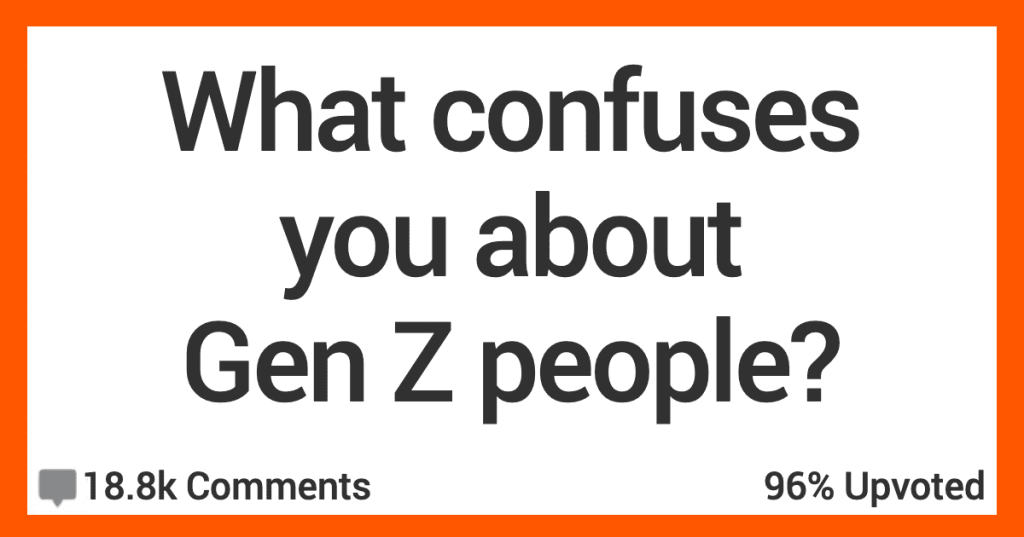 12 People Admit the Things That Confuse Them About Gen Z

Every generation thinks the ones that come after them are immature, clueless, soft, weak…and just plain WEIRD.

So what confuses people about the youngsters in Gen Z?

“I’m Gen X and I want to know why Gen Z wears those hot hoodies in the summer.”

“Why are all the sneakers so bulky?

I feel like that’s just early 2000s fashion coming back around.

Skateboarding shoes were super popular and bulky like cinder blocks when I was 13-14 around 2002.”

“Where are all the Gen Z celebrities?

Apart from Tom Holland and Zendaya, I cannot think of a leading man or woman in Hollywood in their 20s.

Ryan Gosling is playing Ken in the Barbie movie and he’s 41.”

“I coach lots of Gen Z-ers.

What the f**k are their emails? I was working with a few to get something done and instead of sending ONE email with the information. Three separate people emailed one person random piecemeal information with ZERO context.

I had to remind them that email is not text message and have all your ducks in a row before hitting send. For the love of God.”

“How do all these young guys get their hair to look that way that’s super in right now?

Are they out getting perms?”

“Why are they all younger than me?

“They have a very weird and strange sense of humor…like it’s hard articulate what it is exactly.

But it’s quite precise.”

“Why do some of them act like they pioneered the social media/influencer boom or look at me surprised because I have Snapchat, etc?

Even though many of these came out when millennials like me were in our early 20s and the core demographic.”

“Why do Gen Zers get surprised when they come across a 30+ year old in a video game?

Like, we were literally playing video games before you were born.”

“One of my students said, “LMAO” in front of my yesterday and she asked me if I knew what it meant.

I had to tell her that those kinds of acronyms are at least 20 years old and my generation popularized them.

“The broccoli hair, the short shorts and the flip flops with socks, I see a million young dudes rocking this look and I don’t get it.

Other than that, y’all are great.”

I have a niece who’s in high school, and her friends and stuff think they came up with everything. They look at me weird when I talk about apps, or clothing trends, or talk about a certain song that they’re listening to.

The one that always makes me laugh is when they’re playing a song and I start singing along, and they’re all surprised. Even though the song came out 20-30 years ago or it’s a song that blew up when I was in high school.

Like a lot of old Drake songs. That guy blew up when I was in high school. I know a lot of his old music, but they don’t understand.

A lot of kids wear Kappa track suits where I am too. That’s what I was wearing in Grade 7 and 8.”