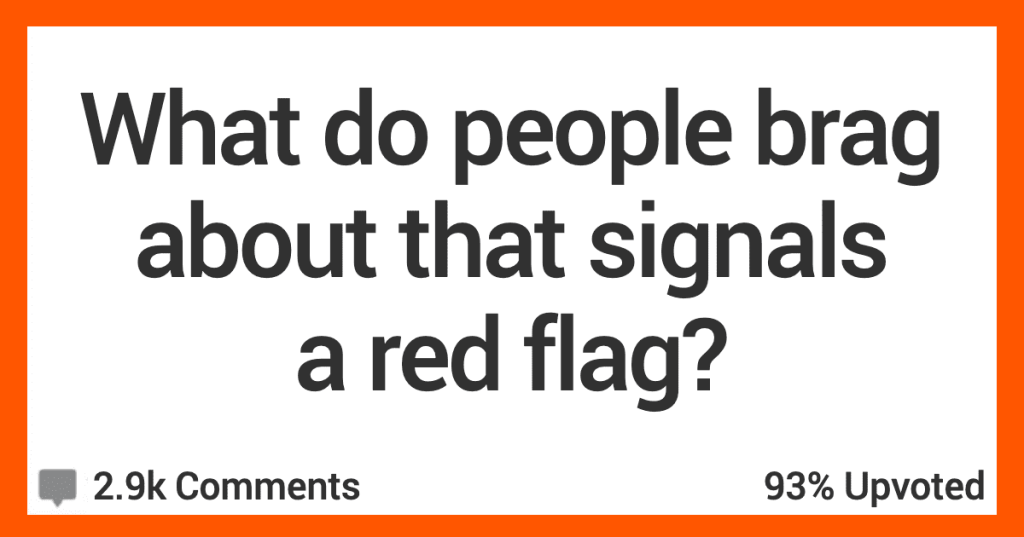 I personally think that people who brag about pretty much ANYTHING are giving off major red flags.

But that’s just my opinion…and obviously, some of these red flags are bigger than others.

Let’s hear from folks on AskReddit about what they think about this.

“My friend says she is a good d**nk driver.

She has done so with me before as I’m disabled and cannot drive. When we got home, she apologized for being emotional because she was d**nk.

Granted, she genuinely didn’t seem affected by it and drove rather well, but it still makes me uncomfortable and I don’t know how to tell her that I’m not okay with her driving me around while d**nk. Every time I’ve mentioned it, she gets defensive.”

“How easily they can manipulate people.

Or how good they are at lying.”

“Most people I’ve come across that boast about being good people are actually massive pieces of s**t.”

“How overprotective their partner is.

“I worked with a guy who bragged about being in prison for most of his life, and how everyone was stupid to him.”

“When someone tries to one up your struggles it’s not only annoying but a huge red flag.

If I said I didn’t get a lot of sleep they would be like “oh that’s crazy, I got 5 seconds of sleep while I was being dangled over a fire proof alligator pit filled with lava from a fishing line” it just shows that they will literally never be there for you and make every conversation about themselves.”

It’s not a bad thing, but for me it’s a red flag, in any relationship. I don’t live for the hustle and ppl who think it’s impressive they work 60-70 hours a week because they have “important work to do” are free to do as they please but get a big “I’ll pass”, especially if it’s on a date.

I used to work 60-70 hrs a week and there’s nothing to brag about, it’s like Stockholm syndrome for a job.”

“When people brag about their body count.

Why TF would I care how many people you have had s** with.”

“”I’m just blunt and tell it like it is”

Translates to: I’m just an abrasive a**hole who finds every opportunity to bring people down.”

10. Not something to brag about.

“Bragging about getting into/winning physical fights.

Tell me more about how you beat some dude to a pulp.

Not psycho at all.”

“I was at a party and asked my friend who that guy over there was and he was like “so and so from New York.”

And I said “Oh god they always brag about where they live, their income, and their occupation.”

In the first sentence this guy says ALL 3 and we start busting up laughing. What a stooge.”

“I had a friend who prided himself on being a lying, manipulative psychopath. I knew it was a front to mask his desperate insecurity, so I stayed his friend regardless of how he pretended to be.

Then that persona eclipsed his better self and he turned on me, literally trying to gaslight me at one point. Should’ve seen it coming a mile away but for some reason I thought he would spare me.”

Do you know of any red flags like this?