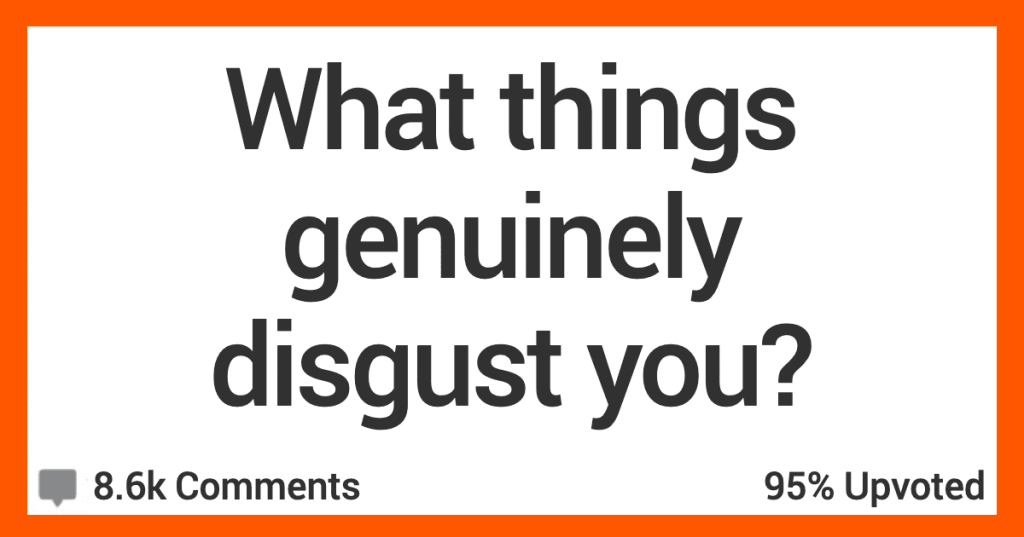 12 People Admit What Genuinely Disgusts Them

Oh no! I wasn’t talking to you!

What genuinely disgusts you?

“Guys who can’t be bothered to lift the seat when they p**s in bathrooms that don’t have a stand-up urinal.

“The goo in the sink drain once you’ve done the dishes.

Touching this to clean the sink is always a gut-wrenching, vomit-inducing moment.”

Just hang onto your s**t for two minutes and put it in a bin instead of just throwing it on the ground.”

Carrying around a bottle of your own brown cloudy spit that smells like absolute d**th just skeeves me out on a level I can barely even describe.

Bonus points if you’re the d**chebag who leaves the spit bottles or cups for other people to clean up.”

I’d rather stay in a room full of snakes than to stay with one huge flying cockroach.”

“When bread gets soaked, usually when I’m washing leftovers off of plates, and it gets all spongey.”

“Bu**ying. Especially in schools. Some parents need to teach their kids that being different is a good thing.

Kids need to learn early on that b**lying is traumatic and can effect a kid who is b**lied for the rest of his life, it also can lead to bad habits like s**king, drugs and al**hol.”

“People who record themselves being nice to the less fortunate to make money.

Be nice without needing attention for it.”

“People who feel this obsession to lick their fingers before handing you money/paper.

Basically you are trying to make me handle your saliva you sick f**k. If we ain’t banging I don’t want anything to do with your bodily fluids.”

Especially the kind of cruelty that exists for no reason. Hurting people out of vengance or retribution or because of some fucked up moral reason is bad enough, but what is truely disgusting is cruelty for it’s own sake.

Kicking a dog, spitting on the homeless, that sort of thing. Occasionally there will be a news article about some kids setting fire to a homrless person or t**turing an animal, and I just lose hope for humanity for a moment.”

“People who view and treat individuals with occupations like housekeeping/cleaning and warehouse type jobs as if they are beneath them.

I have a co-worker who thinks she’s God’s gift to earth and treats the people in these positions in our company like they’re lesser than her.

Her personality disgusts me.”

The one bodily fluid I can not handle. The smell will make me immediately yack. Can’t do it. I deal with urine and feces in my job on a daily basis.

Doesn’t phase me one bit. Can’t be around vomit.”