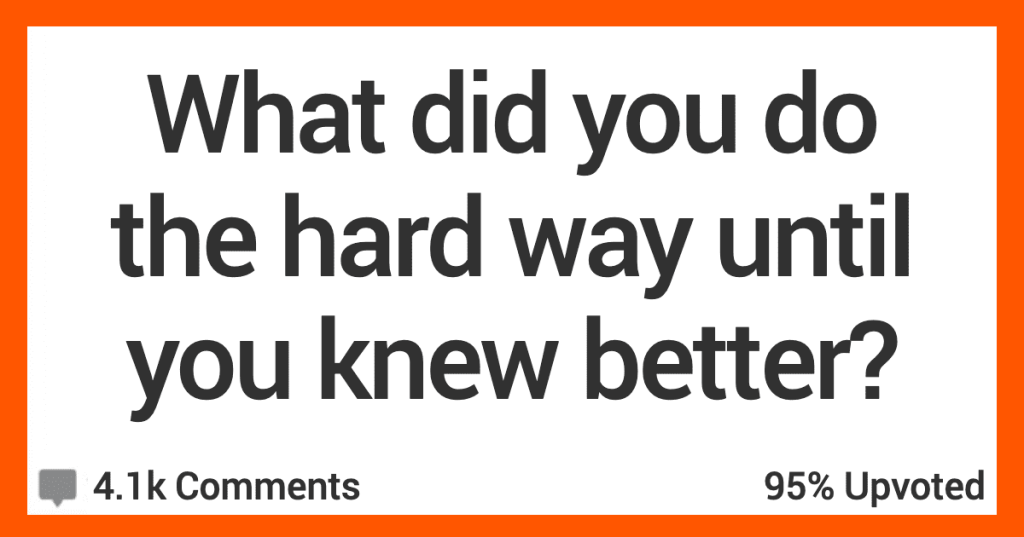 But don’t beat yourself up about it!

Yes, you’re allowed to feel stupid for a while, but you’ll get over it…

Let’s hear from people on AskReddit about what they did the hard way before they learned there was an easier way to do it.

“I’ve learned over the years that if there’s something you want to do in Excel, there’s probably a function or macro to do it easier/better.”

“My dishwasher is across the kitchen from my utensil drawer.

For years, while unloading the dishwasher I would stuff as many utensils as I could in my hands. I’d inevitably drop some, and there are a few knicks in my hardwood floor from dropping forks and spoons.

One day at work, a coworker unloaded the dishwasher and removed the utensil basket and carried it over to the utensil drawer. I never felt so dumb.”

“When I was a kid I was bad at nail clippers. I knew to put my nail in the chompy bit at the end, but I didn’t realize that the handle/lever folded out.

So I would just squeeze really hard until I broke my nail off in the blades. This went on for an embarrassingly long time before my mom saw me and taught me how to open the lever.”

“For dusting things like baseboards, windowsills, and picture frames, the best tool is a (clean) paintbrush.

I always used to either use a cloth or something made specifically for dusting, but the paintbrush is much faster and easier. I keep a cheap 2-inch paintbrush exclusively for dusting now.

“As a kid, whenever my bicycle wheels got warped (I crashed into stuff a lot), I would fix them by smashing the rims with a hammer. It mostly worked.

Eventually I learned that you can just tighten and loosen the spokes to straighten warped wheels. So much easier, and much less destructive.”

No more scrubbing off baked- on cheese and sauce. If it goes in the oven, I use parchment paper.”

“Put an absorbent-fabric scrunchie on each wrist before washing your face.

They stop the water from running up your arms when rinsing and getting the insides of your robe sleeves uncomfortably wet.”

“I’ve been opening pistachios with my thumbs for 30 years until I saw my wife use half a shell to wrench her next one open and then my mind exploded.”

“Up until just the last 6 months or so, if I wanted to do a Google search I’d always type www.google.com into the address bar and to to the actual Google front page before doing the search, even though we’ve been able to just type searches directly into the URL bar for quite a long time now.

One of those old, ingrained habits I guess. Though if it helps redeem me slightly, I didn’t actually type the full www. and .com, because of a trick a friend showed me in ~2005 where you can just type a word into the address bar and press Ctrl + Enter so it automatically puts them there for you – so I’d type google and press Ctrl + Enter.

I remember thinking that was wizardry when my friend showed me haha, even if it’s mostly redundant now.”

I’ve now used many and actually got the bottom of every can by simply not shaking them…I’m 40 and also an engineer.”

I used to meticulously measure and line up so my nails so they’d match the hardware on the back of the frame.

Now I just use a piece of painters tape, lay it on the back of the frame, mark hardware on the frame and then remove the tape and place it on the wall and that gives you the exact placement for your picture hanging hooks and nails.”

What did you do the hard way before you found an easier way to do it?