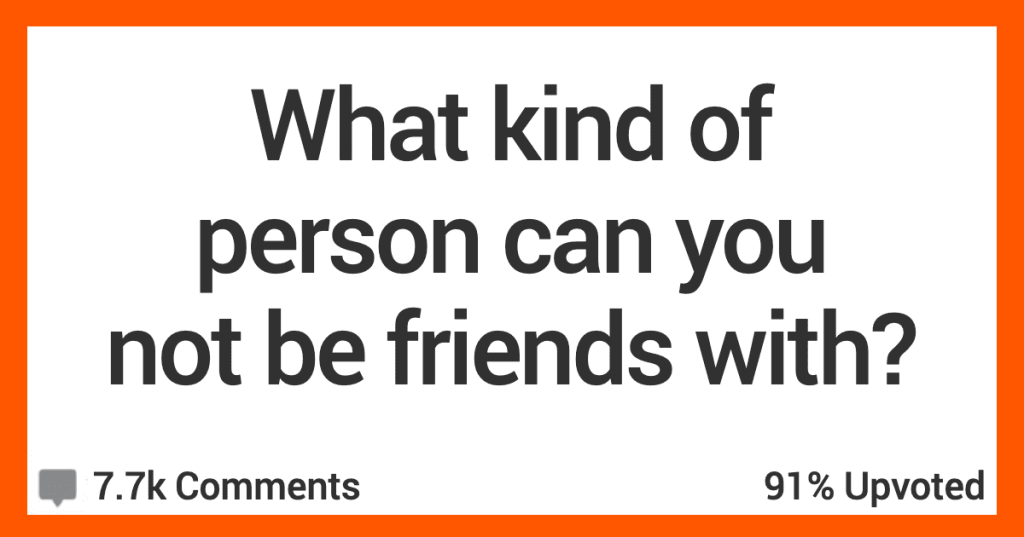 Do you think there’s a type of person out there that you could never, ever be friends with?

Of course, there are!

We’re only human, you know…?

AskReddit users got honest about what types of folks they don’t think they could ever be friends with. Let’s take a look.

Do I want to “still be friends” with a cheating ex?

“A person who gets angry all the time.

Those type of people you can’t joke around with cause they get offended way too easily.”

“I’ve come to learn I cannot stand to listen to toxic positivity.

Negatives are a very important part of life, fear keeps us alive and teaches us who we really are and people that continually refuse those realizations terrify me.”

“People incapable for admit being wrong. There can be no meaningful conversation with them.

They are so busy trying to prove themselves superior by trivializing every question presented to them. Even when it wasn’t meant to be argumentative.”

“Someone who can’t let another person just have a moment without telling them how they went through a something worse/similar.

Sometimes people just want to be listened to and heard.”

Deception at its finest.”

They make every situation about that, have nothing to say about anything nor have any personality outside their tribal identity. It is exhausting.”

“People who live for drama.

My girlfriend and I have had our relationship for a little over a year and it has been blissful for us aside from a couple tiny bumps.

I definitely know what I do and don’t like now.”

“One of those people who come as a set with their partner. It just irritates me beyond belief when couples live in each other’s pockets with no individual social life.

Had friends like it, wouldn’t choose to do it again. If I invite Jennifer to go to the movies with me and she turns up with her boyfriend in tow I already know we’re not going to get on.”

Are rude to anyone in a service industry

Are r**ist or ho**phobic or other wise divide people based on race, s**uality, gender, disability, and so on.

Are intentionally blind to the suffering of others

Use “religion” to justify treating other people as “less than”.

Try to foist their personal morality and beliefs on others.

Oh and my ex wife. She’s not a bad person really and we co-parent well together, but no way can I be friends with her.”

“People like my brother. He’s my little brother and I love him, but I’ve said multiple times if we weren’t related I would not talk to him.

He’s the type of guy who is skinny but bashes other guy’s figures, drinks s**t tons of energy drinks, doesn’t brush his teeth, he unironically calls himself a sigma male and bases his personality around Tommy Shelby from Peaky Blinders, he gets into fights for no reason, cheats on every girlfriend he gets because “hoes ain’t loyal” and thinks Jacka** is peak comedy.

He’s in his late teens, so I hope he grows out of it, but Jesus Christ.”

“Hypocritical, having a victim complex with a side dish of being absolutely bigoted. The holy trinity of s**tty friends.

Being stubborn and unwilling to change while blaming others for their mistakes, distorting stuff into whatever f**ked up perspective they want just to gain pity and turn people against “whoever wronged them” at the time.”