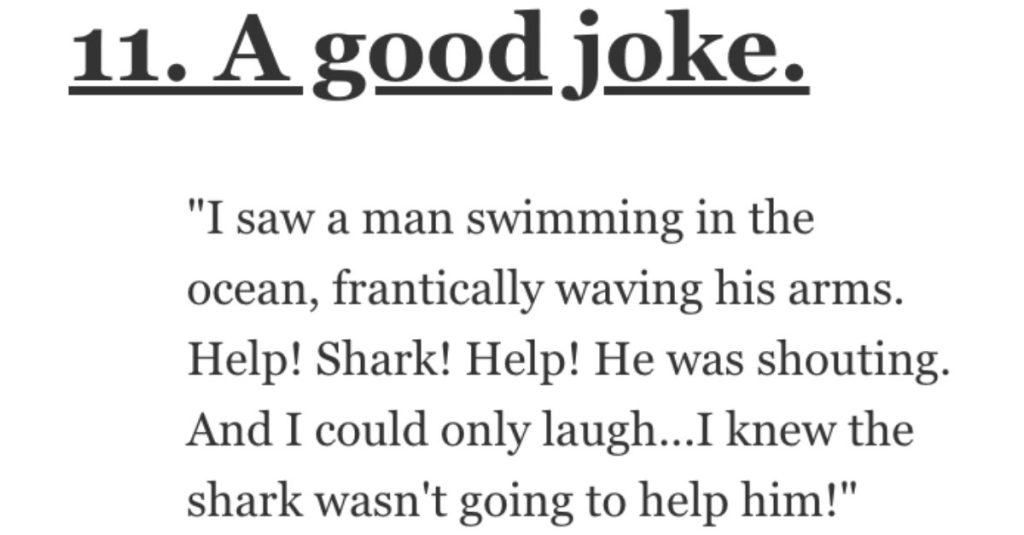 12 People Offer up Jokes They’d Tell if They Had to Make Someone Laugh for $1,000

I already know that if someone came up to me and demanded I tell them a funny joke, I’d blow it…even if they said I’d get $1,000 if I made them laugh…I’m not good under pressure, okay?

Do you think you’d be able to pull it off?

People on AskReddit shared the jokes they’d tell if $1,000 was on the line.

“Saw this somewhere recently – a priest, a pastor, and a rabbit walk into a blood bank. The nurse or whoever asks the rabbit “what’s your blood type?”

“What’s the difference between Dubai and Abu Dhabi?

People in Dubai don’t like the Flintstones but people in Abu Dhabi dooooooooooo!”

“What do you call a boomerang that doesn’t work?

“My girlfriend’s dog d**d, so I tried to cheer her up by getting her an identical one.

It just made her more upset.

She screamed at me, “What am I supposed to do with two d**d dogs?””

“Father O’Brien is walking back through the town when a prostitute approaches him and says “Father, how about a bl**job? Thirty dollars for a man of the cloth!”

Flustered, he declines quickly and rushes back through town to his office where a nun finds him still troubled and shaken.

“The Pope decides to take a cross-country tour across America, beginning in California and ending in New York.

Somewhere in the Midwest, the Popemobile breaks down, and while it’s repaired, the Pope continued his journey with a limousine rental. After a few hours, the chauffeur of the rented limousine rolled down the glass partition, and spoke: “I know I’m not supposed to talk to you, your holiness, or highness – I’m not even sure what to call you?”

“Well, when they told me who I’d be driving, I was really thrilled. It’s such an honor, and if there is anything I can do to make it a better trip, I’ll do my best to make sure it happens.”

The Pope thought for a while, then replied, “You know, before I became Pope, I really enjoyed driving. I would drive for hours. But now, no one will allow me to drive anywhere. Would you mind if we switched places and I can drive?”

The chauffeur agreed and the two switched places.

After a while, the Pope became relaxed, turned the radio on, hung his arm out the window, and just enjoyed cruising. However, not aware of his increasing speed, he was soon pulled over by a motorcycle cop.

The cop walked up to the limousine, saw who was driving, said, “Excuse me, your holiness, for a moment”, then returned to his bike and got on the radio.

“Chief, I think I have a problem. I believe I pulled over someone pretty important, and I’m not sure how to deal with it.”

The Chief responded: “Don’t tell me you pulled over a state representative again, Johnson?”

“No, I think this person is more important.”

“No, I believe more important than the Governor.”

“Johnson, tell me you didn’t pull over a Presidential Motorcade.”

“No, they may be even more important than the President.”

“What? Really? Who’s more important than the President?”

“Why did Barbie never get pregnant?

Because Ken came in a different box.”

“What’s the difference between a BMW and a hedgehog?

A hedgehog has the p**cks on the outside.”

“Trampolines were formerly known as Jumpolines until 1975 when your mom first used one.

“I saw a man swimming in the ocean, frantically waving his arms.

Help! Shark! Help! He was shouting.

And I could only laugh…I knew the shark wasn’t going to help him!”

“Two nuns are cycling into town when they are forced to detour onto a side street.

The road conditions worsen and one nun, feeling quite shaken, says to the other “Have you ever come this way before?”

The second nun, rather red in the face, replies breathlessly “no, I think it’s the cobblestones!””