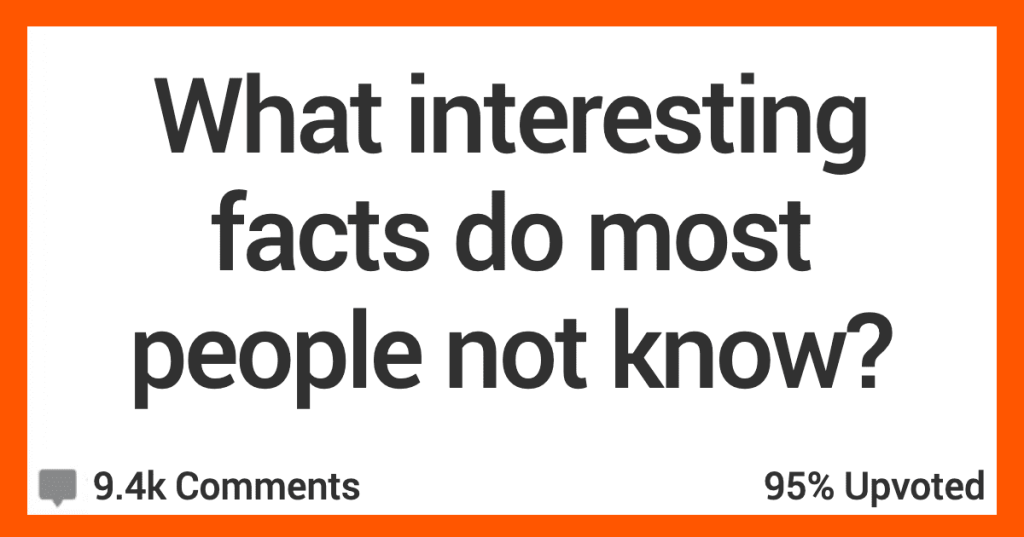 I like to consider myself a lifelong learner and I really wish I had more time to explore topics I know nothing about…but who has the time to do that?

So let’s all thank these AskReddit users who were nice enough to share interesting facts that they don’t think most people don’t know about.

“Sara Josepha Hale is the reason for the myth and celebration of Thanksgiving in the United States.

She asked President Lincoln in 1863 to champion a holiday that would bring families together in the wake of the U.S. Civil War. The goal was to get people back in each others company to celebrate the nation.

She then helped perpetuate a myth of “The First Thanksgiving” to remind the country of how the colonists persevered with the help of indigenous peoples. Seven years later, other Federal Holidays would officially be recognized throughout the country.”

“In the 1890s a man named Jan Chalupa in Bohemia was arrested for continuously insulting one of his neighbors nearly every day for about two years straight.”

“Opossums are extremely unlikely to have rabies.

They have a lower body temperature than most mammals and it makes them an unsuitable host for rabies.

They also eat, like, 5,000 ticks each summer. Good lil buddies to keep in the area.”

“About 45% of all Canadians live farther south than Americans who live in Portland, Oregon.”

“Yang Kyoungjong is a Korean who was captured 3 times and forced to fight for the Imperial Japanese Army, the Soviet Red Army, and later the German Wehrmacht during World War II.”

“Dinosaur fossils in China may have given rise to the idea of dragons. The modern Chinese names for different dinosaur species are all based on the root for “dragon”; e.g. a stegosaurus is literally a sword dragon, a triceratops is a three horn dragon, etc.

Meanwhile in Europe, the skulls of mastodons may have given rise to the idea of the cyclops, or one-eyed giant. The mastodon skull has a single large opening in the front, which looks like it might be the socket for a huge eye. In fact, it’s where the trunk is connected.”

“The phrase “it’s raining cats and dogs” comes from the era of thatched roofs. In the heat of the day, the dogs and cats would climb into the thatch to stay cool.

If it rained particularly hard, it would make the straw slippery and they would slide out. The phrase specifically refers to very hard rain, hard enough to permeate the top layers and unseat the animals.”

“Metallica mentions “leather” nine times in their album, K**l Em All, and then never again in any other song they’ve put out.”

9. It’s up there somewhere.

“Eugene Cernan, the last astronaut to stand on the Moon, drew his daughter’s initials in the Moon dust before he left for the trip back to Earth.”

“Sarah Winchester (who built the “Winchester Mystery House”) was not into the occult, wasn’t afraid of evil spirits, and didn’t think she could live forever by continuing construction of her house – or, at least there is no evidence to support that.

People who knew her said she was a devout Christian and would never have anything to do with the occult. The stories about spiritualism and paranoia are for the tourists. She probably just liked having workmen around and a little activity going on at the house – she was one of the richest women in the world, so she could do as she pleased.

Some who knew her said she may have done it to keep locals employed. Far from being afraid of stopping construction, one of her letters mentions that she halted construction due to excessive heat out of concern for the workmen. It’s interesting how BS can just take the place of reality if it’s repeated often enough.”

“Most fire engines only carry enough water to flow for a couple minutes. They really rely on fire hydrants to sustain water during a structure fire.

Ours had 750 gallons which sounds like a lot, but each of the smallest hoselines flowed 175 gallons per minute. Every house fire, at least two get pulled. Minimum 350gpm gives us about two minutes of water.

Don’t block fire hydrants, and please shovel a path to them during snowstorms.”

“There are at least three people who were born before the Wright Brothers took their first flight at Kittyhawk who were still alive when the Mars Rover d**d.

When they were born, humankind was stuck on the ground. In their lifetime, they saw single person flight, then military flight, intercontinental flight, a (gasp) female pilot, commercial flights, supersonic flight, space flight, humans on the moon, a probe sent out of the solar system, a robot cruising around on an entirely different planet picking up rocks, and finally that robot had been there so long it d**d.

All in their lifetime.

That’s just crazy to me.”

Tell us some interesting facts in the comments.