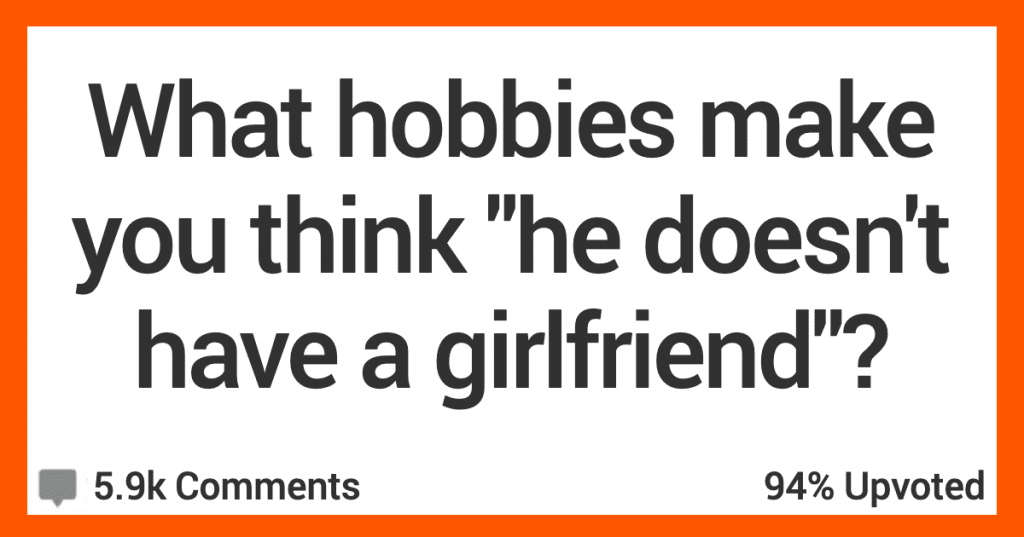 12 People Share Hobbies That Make Them Think “He Probably Doesn’t Have a Girlfriend”?

I was tempted to say “Dungeons and Dragons” when I saw this article, but I know a few guys who play “D & D” on a regular basis and they do just fine with the ladies.

And it shocks me!

I guess you just never know…

What hobby makes you think, “he probably doesn’t have a girlfriend”?

Let’s see what AskReddit users had to say.

“I once watched “My Strange Addiction.”

A guy was in a relationship with his car.

I have a friend really handsome and funny but people usually asume that his gay, so it’s harder for him.”

“If you’re in high school and you play D&D or Warhammer 40k, maybe no girlfriend.

All bets are off once you’re older than 25.”

In this economy you’d be lucky to have such a job.”

I’m not going to pretend to take you or your anime user pic seriously.”

The guy basically has a second, unpaid job that keeps him busy most nights.

In real life, he’d never have time for a full time girlfriend.”

I know a guy who has a literal Saber shrine in his closet.

There is no doubt that he’s a virgin.”

Those men. The ones who stay up well past midnight and wait for the right atmospheric conditions in order to chat with some Austrian guy they’ve never met.

Those conversations, and those relationships are far more intimate than any others that they have in their lives.”

“An obsessive collection of all things dragon related.

They are a unique group who are usually creepy to women.

I’m a railfan after marrying one, but so many of those guys are ultra creepy.”

“How about the reverse: “She doesn’t have a boyfriend.”

“I don’t think you can emphasize the ‘probably’ part of this enough.

My best buddy is into some…well, I don’t want to sound mean, but some dorky stuff. Model airplanes, he’s brought me to play D&D at the comic book store down the street from him a few times, motherf**ker collects old sci-fi VHS tapes, action figures, anime, you get it.

But this dude SLAYS when it comes to women. I haven’t been single for a long time, and he is my only single friend that makes me even slightly jealous. He’s a decent looking dude, not like a movie star or model or anything crazy, but he exudes such an odd brand of confidence and self-assurance that women love him.

He always has something to talk about, is always meeting new people, and when he tells women about his hobbies he talks about them with such passion and joy that I really do think it helps him ‘seal the deal’. He’s single by choice, he could get l**d in 5 texts, and I’m positive he’s just waiting for the right girl who shares similar hobbies.”

What do you have to say about this?