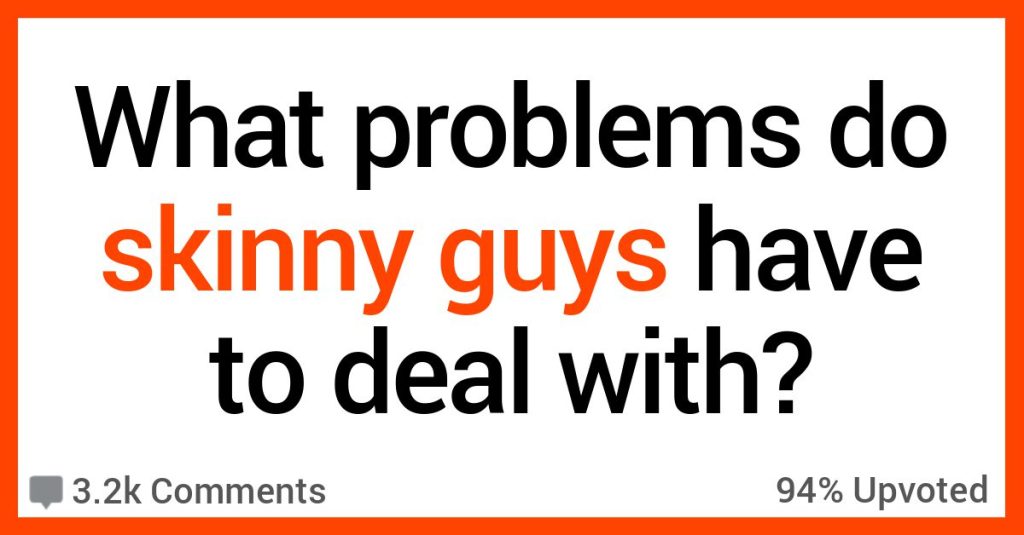 I’m somewhere in the middle…

So I don’t really understand the struggles of people who are too heavy or too thin.

But both of those groups have those issues, right?

And today we’re gonna focus on the skinny folks.

What are skinny guy problems that most people don’t talk about?

“Because you’re skinny, people feel like it’s okay for them to say “why are you so thin? You need to eat more. What you don’t enjoy food”?

When they would never say the reverse to a person who is overweight.”

“I get cold fast and easy.

My hands and feet betray me quick.”

“For men that are not just skinny but actually suffering from eating disorders, it’s more difficult to get help because it’s seen as a “female” disorder.”

“Youre always nauseous because if you dont eat within 4 minutes of the moment you discover youre hungry then its too late and you wont be able to stomach eating very well, you just have to force yourself.

People constantly clown on you for it.

You cant get enough energy to work out well because you dont have an appetite to eat enough carbs to support working out.

Some girls will love that youre skinny and constantly remind you of it, but since you used to get b**lied for it it just makes you feel like s**t.”

“Finding clothes that fit is difficult. I can be a Medium for one T-shirt but a Small for another.

I’m always between sizes so because of that, buying cool T-shirts online is always both a risk and a nightmare.”

“I can’t tell you how many f**king morbidly obese people tell me I need to “eat a cheeseburger”. At work too.

Could you imagine what would happen to me as a 40 year old skinny white male if I told some fat lady she needed to “eat a salad” or “go for a jog”? I’d be talking to Human Resources over that.

It’s a huge double standard that drives me insane.”

“We’re constantly looked down on as if we’re m**h heads and that anyone bigger then us assumes we’re weak.”

“As a skinny guy myself, i suffer with an eating disorder called ARFID where I don’t feel hungry and base food off of taste, texture and smell s**t like that.

I find it very difficult finding clothes to fit me, an example being underwear, I’m 18 in December yet I’m in 10-11 boxers. Standing up is a nightmare and the fatigue is horrendous.

I can hardly do exercise and I am fairly weak which i will freely admit, I can’t take a hit very well but when I’m pi**ed i can throw a mean one. My heart is strained a lot too.”

“I’m tall and thin, but mostly because of a growth spurt as a teen in my torso (still have the stretch marks) more then my legs.

Anyways, buying shirts is a giant pain in the a**. Large is too small, most shirts especially if I screw up the laundry eventually shrink and shows off my belly.

Only a little, but it’s uncomfortable, constantly pulling a Picard-maneuver tugging my shirt down. Or I go XL, but that’s too wide and I look like I frankly did as a teenager trying to be all awkward hip hop in the 90’s.

More and more companies seem to be addressing this issue and offer shirts my size, but of course they’re a lot pricier.”

“Dating is harder, less respect in the workplace, and you can still be skinny in the waist while gaining fat in the face.”

People think it doesn’t hurt the same as someone overweight.

It does and should be treated as such. People get the same insecurities.”

“I was very skinny until I was about 22. Some of the problems…

You feel the cold

Jeans generally don’t come with a waist size smaller than 28 inches, so belts are a must

Clothes just hang off you and don’t fit

You’ll get sent flying if someone jumps into you in a mosh pit, so you basically can’t mosh. It’s like being the ball in a pinball machine.

Do you know of some more skinny guy problems?