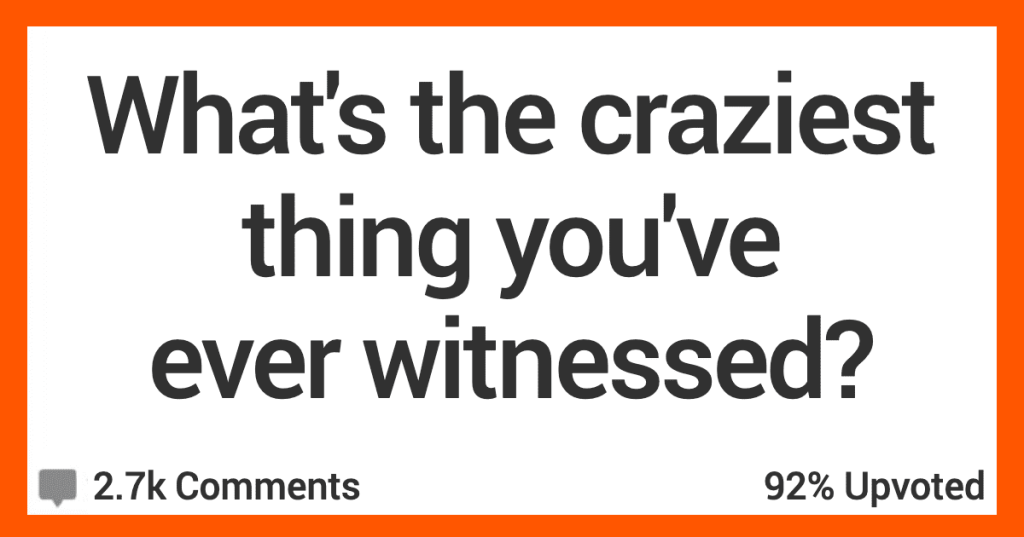 12 People Share Stories About the Craziest Thing They Ever Witnessed

It’s a real punch to the gut when you see something shocking that really stops you in your tracks.

Your body freezes up and what you witnessed seems so surreal that you have a hard time believing it’s real.

If you’ve seen something like that happen, you know exactly what I’m talking about.

Take a look at these stories from AskReddit users about the most shocking things they’ve ever seen in their lives.

“I discovered my roommate after he hung himself.

His morning alarm was going off for 5+ mins. I assumed he went out and forgot his phone so I went in to turn it off.

Nothing can prepare you for that. I still think about him/that morning all the time.”

“I saw the aftermath of a man who had leaped off of an overpass.

He was a whole person, who lived for years, and experienced so much, but suddenly with one action, he became nothing more than a sack of flesh and bone.”

“My father k**led himself when I was in highschool, and seeing that man lying there lifeless, it made me think of everyone he knew, and how they would find out, just like I did about my father, and they would have to feel the same pain I did.

S**cide hurts so much, for everyone it touches. It’s so unjust that so many people feel it the only way out of a s**tty situation.”

“Was taken to the emergency room after a car accident for a few broken bones.

Next to me was someone they just brought from house fire whose whole body was burned screaming at the top of his lungs while they sprayed this substance on him.

F**king horrifying and my situation of just getting hit by a drunk driver did not seem so bad. “

“I used to work valet at a club in a downtown area surrounded by high rises. I was training a new guy on his first day, which turned out to be his last day.

It was going well and it was slow so we were just chatting when all of a sudden I heard what sounded like a gun shot but wasn’t. A girl had fallen of her balcony from the 15th floor directly above us and landed about 10ft in front of us in the street.

I will never forget the sound of her body hitting the ground. It almost wasn’t real. The worst part was the poor young guy I was training got a perfect mouthful of her blood. Never heard from him again after that. Don’t blame him.”

“We were probably 7 yrs old or so. My friend and I were riding bikes in the alley behind our houses. She turned her head to yell at me, “watch this!” just before she left the alley and entered the street.

She was immediately hit by a car. It was almost like slow motion. I actually remember seeing some of her teeth flying out. I ran to her and she was crying very softly. Like a very low whimper. She had stuff running out of her ear. The neighbor at the end of the street was outside watering his lawn so I asked him to stay with her while I ran for her mom.

His wife was calling 911. I’ll never forget the panic on her mother’s face as I ran up screaming for her. She ran outside her house with wild eyes and just seemed to know which way to run. She survived but when we went to the hospital to see her she was in terrible shape.

Really terrible. Her face was not recognizable to me. I was in shock surely. The event was seared into my memory but for the life of me, I can’t remember what happened after.”

“My best girlfriend, coming back from a night out at a club, there were two cars, five of us in each.

She was in the first car when the driver of the truck coming in the other direction veered off the lane, smashing into the first car. I saw her decapitated by the windscreen.

The others in that car were broken boned and smashed but I ran up to the car and my friend without her head has haunted me for over 50 years. The blood.”

“In college a truck going 70 in a 35 t-boned a car pulling out into the intersection. The kid driving the car was k**led instantly. The driver of the truck wasn’t wearing a seat belt and flew through the windshield.

Somehow that SOB survived. A couple friends and I got out and ran to the car that got hit. That sight wasn’t pretty. After regaining some composure we called 911 along with a dozen other witnesses in sure. Then I walked over to the other guy lying in the street.

Some folks were trying to tend to his wounds the best they could. But dang his body was all sorts of messed up. It’s a miracle he lived. I know once he recovered he did some sort of prison time. But I dont know where he is at today. Still in or out, not sure.”

“When I was fifteen I was out with a group of friends. At the weekend we’d go down to this little beach in my home town that’s a mile or so long, with a large 150ft tall suspension bridge at the mid point which spans a large river.

We were all sitting at a spot just off to the side of the bridge around dusk, where there was a bunch of large pieces of drift wood which we used as benches.

All of a sudden, we hear a rush of air followed by a huge splash in the water right in front of us. Our first thought was that someone on the bridge had lost a tire or something and it had somehow managed to clear the tall safety barrier.

Nope, a man had jumped. The next thing we see is his head bobbing up and a distinctive blue and white striped football shirt.

Some of us called out to him but he was gone as soon as he hit the water which was evident by what was left of his face. Even if he had been alive, we couldn’t swim out to him due to how dangerous this particular stretch of water was so all that we could do is call the emergency services.

They scrambled rescue boats and a chopper but it was already getting dark so we were asked to follow the body down the river until they arrived to make sure they could reach him.

Eventually they managed to pull him onto a boat while the police arrived to take statements.

I’ll never forget the image of him being lifted from the water. The front of his skull and face were split open like a water melon, he must have dove head first with his arms outstretched and broken every bone in them as they moved like they were made of rubber, bending in places they arent supposed to.”

“Me and my grandpa was making cookies when he looked out the window and saw some kids outside and told me: “Hey, How about we give those kids some treats, yeah?” I agreed and walked outside, He gave me the tray of cookies and said “Wait here, I’ll be right back.”

I gave the kids cookies as my grandpa went back in, 30 minutes later i head back in to find him lying on the floor, Turns out he had a heart attack but didn’t seem to yell out for me, I miss him so much.”

Made me realize the body really is just a vessel for the individual, he didn’t look like he had ever been a real, living human being, and it was awful.”

What’s the most shocking thing you’ve ever seen?

Please share your stories with us in the comments.