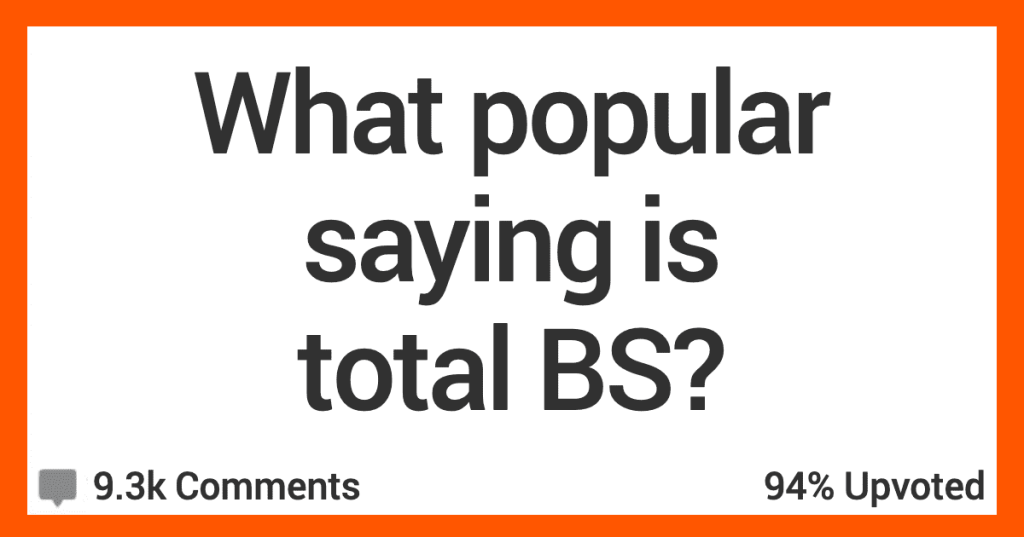 What Popular Saying Is Total BS? Here’s What People Said.

Good things come to those who wait…

How many times have you heard that in your life?

Probably a lot! But is it true?

Definitely not for everyone…

AskReddit users sounded off about the popular sayings that they think are total bulls**t.

“”Only the guilty explain themselves.”

Sure they do, because wrongly accusing someone can do plenty harm!”

I know for a fact that there have been several times that I had smelt it, and know absolutely that I had not dealt it!”

If anything it means the opposite, love means actually having to say you’re sorry and that you messed up.

Of course you apologize to the ones you love.”

““If you can’t deal with my worst, you don’t deserve my best”.

Closest thing to a Surgeon General’s warning label for people.”

“”Buy the biggest house that you can afford.”

This is terrible financial advice.”

6. Depends on the situation.

The more fitting saying is “forgive but never forget.” To be clear, this is NOT to say one should hold a grudge.

Rather, it’s just a reminder to watch out for red flags/early warning signs of repeat offenses based on past experiences – either in general or particularly with the forgiven person.”

No neurologist has ever uttered anything that could even be misinterpreted to conclude that.

It’s a completely made up “fact”.”

“‘The truth always comes out’ or ‘secrets never stay buried’ or some bulls**t variation of that.

I can think of SO many examples of crimes remaining unsolved forever or m**derers d**ng in prison without revealing where they hid the bodies, etc.

I wonder how many of histories absolutely enormous secrets were never uncovered because those few individuals who knew about them literally took it with them to their graves.”

“”Slow and steady wins the race.”

The true moral of the story The Tortoise and the Hare is “Hubris is God’s mightiest sword” since the hare’s arrogance was his downfall in the race.”

“”The customer is always right.”

We should just change it to, “the customer has the money.””

Nonsense. Sleep it off.

We’ll both feel better in the morning. I’m not giving up sleep to fight.”

“”Blood is thicker than water.”

Said by a**sive family members to guilt people into being loyal to toxic behavior.”

No. Many things are impossible.

What popular saying do you think is BS?