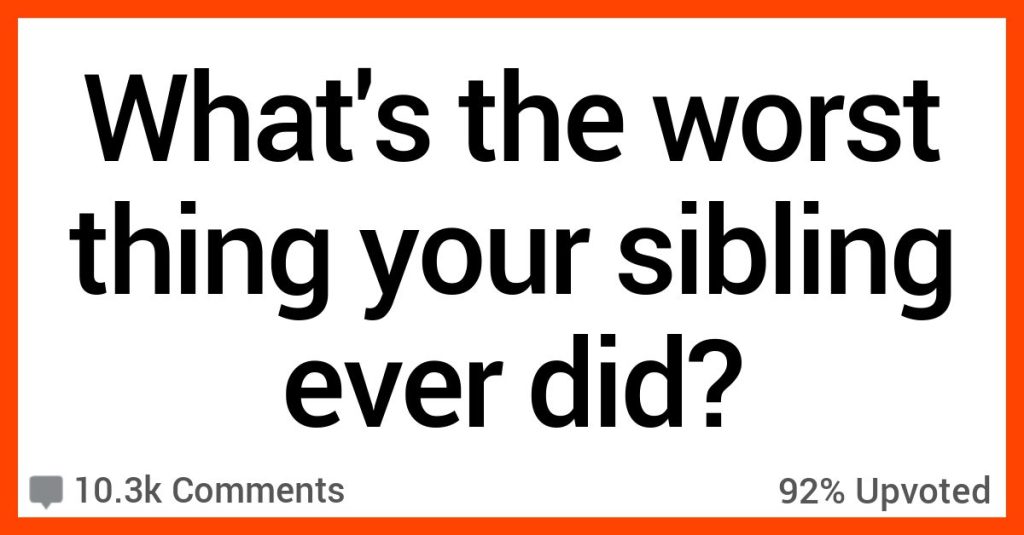 Family is complicated during the best of times, and if you have a sibling (or maybe more than one) who makes life pretty miserable, it can downright awful.

And we’re about to hear some doozies today.

Did you ever have a sibling do something really messed up?

These AskReddit users sure did.

“I was maybe 8 or 9 when this happened. For context, my dad was deployed and my mom was working, so my brother had to babysit me, my brother was around 16 at the time.

As soon as my mom left, he shoved me into a closet and locked me inside for 6 or so hours. I was scared of the dark and couldn’t reach the light string. He didn’t let me out to use the bathroom or eat anything, so I ended up going on myself and sitting in the dark until my mom came home.

She told me that he was asleep in his room when she got home.

Needless to say, I really f**king h**e him. He’s still an awful person.”

“Used my own child to hurt me. My parents would babysit my young son while I was working and my older, adult brother was there.

He has always h**ed me and done everything in his power to hurt me because i was the baby of the family. My son was around 5/6 years old and I caught him verbally impressing onto my child, ideas of weird s**ual fetishes. Like he was trying to corrupt him mentally to hurt me. Removed him from that situation as soon as I figured out what he was doing.

I h**e my brother, he has always done mean things to me my whole life. I swear he’s a sociopath.”

“My step-brother falsely ID’d as me when he was busted driving recklessly on a motorcycle.

He was on probation for drug charges at the time and didn’t want to go to the slam. I missed a whole day off work going to court when I was informed by phone that there was a bench warrant for failure to appear.

One I got to court and the ticketing officer saw me he took me to a conference room where he described little bro to a “T”.I made sure he had the correct home address for the punk. After he was released from jail I made sure he understood of he did it again he would walk crooked for the rest of his life.”

“Dropped a barbell (dumbbell 20lbs) on my face while I was laying on the couch -breaking one of my front teeth and causing permanent jaw damage.

Not to outdo himself, the same brother tried to s**b me in the ribs with a home made shiv causing significant injury a few years later.

And he wonders why even decades later I want nothing to do with him.”

“Got high on h**oin, then drunk at the same time and tried to hit my elderly and disabled mother.

The only reason he didn’t was because I saw the hit coming and was able to get in front of my mom in time. I wrestled him to the ground and pinned him while he was screaming about how he couldn’t wait to watch us all d** and things of that nature.

He also stole my moms pain meds as frequently as he possibly could, even after she had major surgery.”

“It’s hard to decide between him trying to strangle me to d**th in my sleep, him permanently f**king up my hip with a metal bat when I was 9, and him spending over an hour at my birthday dinner recounting every single story of him intentionally hurting me as a kid (most of which I had always thought were accidents) and getting everyone to laugh about it/at me.”

“She poisoned my cat, threw out all my food while I was selling my belongings on ebay to pay rent, because I was ‘too fat’ and would use my things without asking sometimes using all of my consumables and then saying to my wife “don’t worry he’s got money.”

I really don’t think she understood I was literally recycling bottles and cans to make rent, and she would steal the bill money I was saving for phone/internet/rent without a second thought and claim (to our landlord) I never paid her…

The poisoning ended up being the last straw and we had to put him in an oxygen tent and he needed his stomach pumped etc. When it was all said and done we were out of pocket all of our savings, that we had recently started the home purchasing process and needed the cash to close.

Instead we couldn’t afford closing costs, and we ended up forfeiting all the money we had put into the process before that point and had to deal with the broker wanting to sue us…

So now I make it a point to never announce my visits to family (she’s 60+ minutes away from most of them) so she doesn’t have time to show up, if I see her car parked at the relative’s house I’m visiting I will just drive away rather than risk engaging with her again.”

I was only 10, but later found out that they had to go across state lines to Missouri to get married, because Illinois wouldn’t allow it. Otherwise, he’d have gone to jail for statutory r**e.

“When I was 6 or 7 I was going through a very hard time. We had a a**sive household and my mom had just admitted to me she wasn’t coming back.

I was gifted for Christmas a baby doll. I carried her around for about a month then one night my brother’s woke me up. They had shaved her head cut out her eyes lit her head on fire and once I understood what they had done they took her in the closet to “have s** with her”

If anyone cares none of my 6 brothers ever graduated high-school and most of them are felons all but 2 in fact.”

“Oldest brother went to prison for a string of non-v**lent crimes, mostly robberies.

This was a long time ago and he’s much better now. He’s a loving father of two, husband, okayish brother (very demanding), but coming up he was a bit of a nightmare. It was me and two older brothers, the oldest brother watched over us a lot because our parents had to work.

Oldest brother forced my other brother to be his slave basically, cooking and cleaning for him nonstop. If he refused, my brother beat the living s**t out of him.

Since I was the youngest, my oldest brother found me annoying. My bedroom door for some reason locked from the outside, so every day when I got home, from my earliest memory until around 10, I was locked in my room. He would then tell me if I said anything to my parents, he’d beat my a**, and just lock me in my room again.

I told my parents every day, and every day he beat my a**, and locked me back in my room. My parents never did anything or even fixed the lock. We were extremely poor so I just assume they had bigger things to deal with, like how we’re going to eat or afford rent.

“My brother is a bit of a problem not just for the family but also society.

He is a deadbeat father because of his drug addition, and now he is looking at serving up to 15 years in prison because he is a 2 time convicted felon that was caught with 2 firearms and over 100 rounds of ammunition, plus false id to LEO and various drugs in his possession.

So the worst thing he has ever done, is be a deadbeat father.”

“My brother is five years older than me. When he turned 12, my folks trusted him to watch me when they went out for short trips to the store, dinner, whatnot.

When I was about 8 I got into a terrible fight with my brother one night when he was watching me. I think it started with something stupid, I wanted to watch a movie and he wanted the living room and TV to watch something I thought was scary, he told me to f**k off up stairs to my room.

We almost always came to blows over everything. His reactions to arguments were always to get inches from your face and scream as loud as he could and puff up to intimidate. He 100% learned this from our father. He then would put hands on you if you stepped up to him – and I often did and as I started to do to my father as well.

That night we started screaming at each other and he slapped me across the face. I was so shocked I fell on my a** and looked at him in disbelief. He’d split my lower lip, he hit me so hard. I started to cry and said I was going to call our grandmother who lived about 30 minutes away ( this was before cell phones and I didn’t think about calling my folks wherever they were).

As soon as I stood to run to the phone, he grabbed me by the collar of my shirt and tried to keep me away from the phone. I screamed and tried to push him away, but he grabbed my hair with his other hand and forced me into the ground.

He was behind me, his arms shifted into a bear hug, his legs wrapped around mine, and I couldn’t move. I felt his arms shift and one of his forearms went around my neck and his opposite hand clasped over my mouth – and then my nose. I screamed – or tried – that I couldn’t breath.

I couldn’t suck in any air at all. I clawed at his arms, but I remember trying to kick my legs and found they couldn’t budge. We writhed like that, for what felt like a long time. But I clearly remember fading out and going dark.

When I woke up, I was laying on the floor and I had peed myself at some point. I remember feeling so ashamed of that later. I felt so tired and sore, but I looked up and saw my brother sitting on the couch watching his movie and completely ignoring me. He had unplugged the 2 phones we had and had them in his lap. I couldn’t move for a long time and I remember just laying there, hurting in my lungs, crying, but quietly because when I sucked in air my chest felt broken.

He didn’t even look at me, but he said if I told mom or dad he would shoot me. I eventually crawled into the kitchen, walked up the stairs, slipped out of all my wet clothes, and fell into bed and to sleep. I never told my parents.

He is now 38, beat me many times before and after that incident (before he left the house at 18), but never that bad. He is a deadbeat dad, currently in prison for his 5th DUI and marijuana possession charge, homeless when not in prison, has never held a job more than a few months, lies, cheats, steals, and my dad. Still loves him to d**th.”

I don’t think I have ever loved my brother.

Did your siblings ever do any messed-up things to you?

If the answer is YES, tell us about it in the comments.