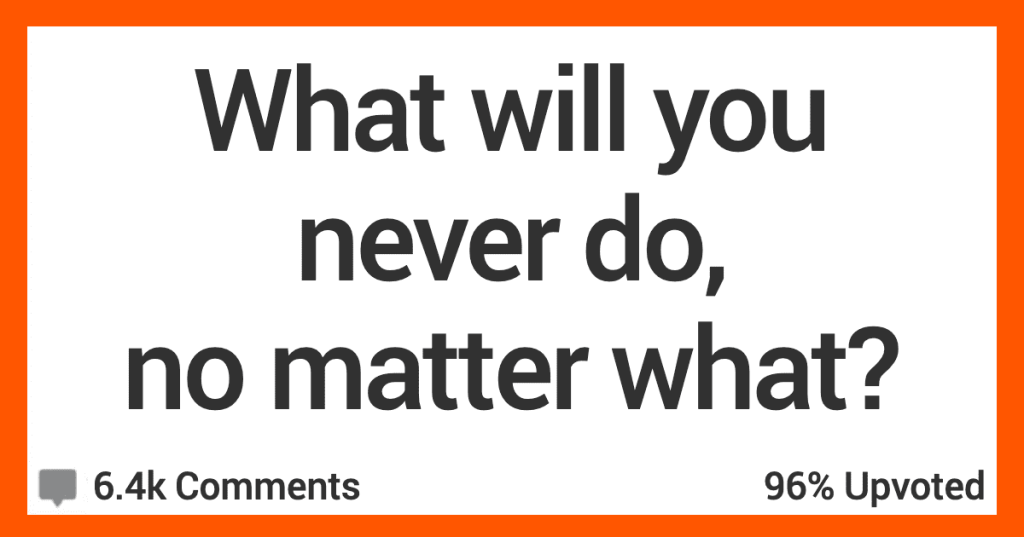 What will you never do?

But before we hear from you, let’s see what people on AskReddit had to say about this.

1. Some people can’t handle it.

Watched it ruin the lives of too many people. My dad drank a couple dozen beers a day and d**d of liver failure in his mid-50s, his mother drank herself into brain damage and spent most of her life in a nursing home, my sister struggled with being a v**lent al**holic for almost two full decades before finally getting sober… it’s hard to want anything to do with it after seeing all of that.

I won’t tell other people not to drink, but I don’t consider it worth the risk of me liking it too much and going down the same path. I’m content to never touch it.”

All of the worst parts of caving, except now you can stir up silt that means your lights no longer cast light, and you’re underwater when you get stuck!”

I came into this world because of a broken bit of rubber, I sure as s**t ain’t risking leaving it that way!”

I tried fantasy league when I was about 20 and it just ruined watching sports for me.

Can’t imagine what it would do to me if there were real money at stake.”

But if I catch a person harming an animal…I will not hesitate to make them pay in the worst ways that I can.

There is no justification for animal cruelty. None.”

I’d be an addicted gamer with bloodshot eyes, dark undereye circles, completely checking out of life, not bathing, etc.

I know this because I can’t even download a game on my phone. I’ll play it for hours, not sleep, just screw up my whole day. I had games as a kid and I’d play them for hours, not eating or sleeping. My parents had to throw away my game system so I’d stop.

For some reason, games activate some addictive part of my brain. I can enjoy alcohol, caffeine, sugar, and even small amounts of nicotine or cannabis in moderation without being addicted. I’ve never bought a scratch-off lottery ticket and I’m the type that goes to a casino to hang out, not to gamble. But video games are my vice, and I know it.”

“Get married. Largely because I legally can’t. I’m on SSI and would lose my benefits if I ever got married.

Also I kind of can’t stand pretty much everything involved with being in relationships, so that probably helps.”

“Cheat on my partner.

I have suffered a lot during my life and I want nobody to suffer.

Getting cheated really can hurt and I also never want to play with anyones trust.”

I swore never to do this even if I’m in a relationship or even when I’m married.”

“Backpack through any country.

I have great admiration for people who do though.”

“Speak to an HR representative.

I’ve left jobs over this with zero regret.

HR Reps are skin suits filled with greed and the worst intent of any people I have met.

And I’ve met A LOT of s**tty people as a bartender in NYC.

If anyone working HR in any industry is reading this post, know that we all know you are overpaid snitches that have zero idea what you are doing and everyone despises you.”

“I refuse, absolutely refuse to fly in a helicopter.

I am scared of heights.”

What will you NEVER do?

Get real with us in the comments.