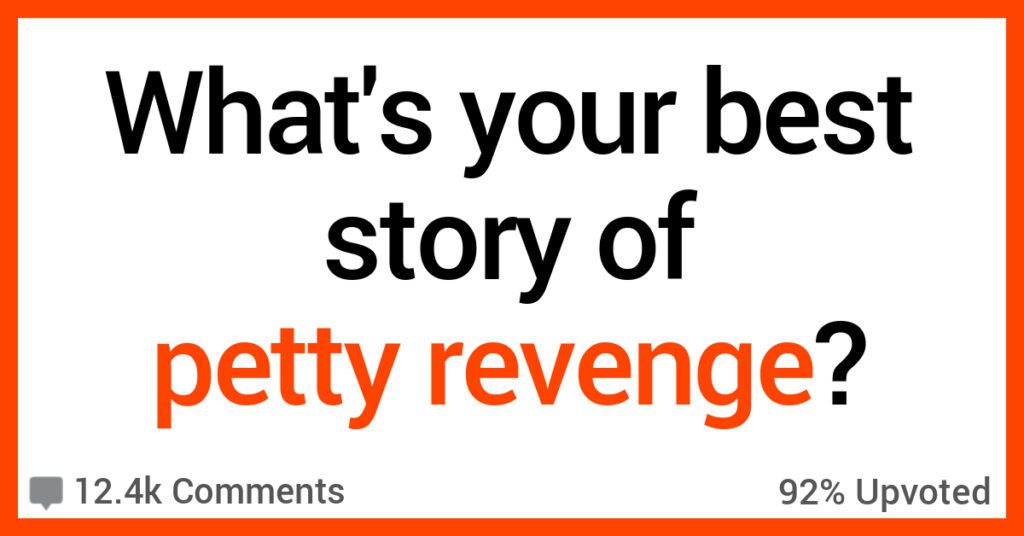 It’s better than really hardcore revenge that could lead to legal problems and you’ll feel a lot better about yourself if you go this route.

And if you’re looking for some ideas, maybe the stories below will inspire you.

Here’s how people responded on AskReddit.

“I once had a colleague I h**ed (he was very condescending and really arrogant), so I put an extra Bluetooth receiver in his computer for a computer mouse and kept the mouse in my drawer.

I would just open my drawer and it would mess his s**t right up. Kept it going for like 2 months.

He was about to m**der the world when I thought I better stop.”

“Back when I was studying engineering, it occurred to me to try and find an app on my iphone for those Panasonic projectors in lecture rooms.

So I get the app and it just let me connect to the one in the class without a password or anything. I have a friend who is one of those perpetual pranksters, you can’t leave your pc or bag or food/drink unattended when he’s around.

So i beam a picture of him onto the projector, so the lecturer is just talking away and this goofy picture of my mate is on the screen. Lecturer doesn’t realise yet, people in the lecture start waking up and giggling a bit.

Now I use the pen function and draw a penis on the picture too. Mate was red in the face and trying to hide. Lecturer finally noticed and says “Michael why is there a picture of you on the screen?”.

Finally for a fleeting moment I actually wrecked that f**ker.”

“When I was a kid I got the Sabrina the Teenage Witch “Handbook” – it was full of kiddie experiments and stuff and was pretty fun.

My older sister had upset or annoyed me about something, so I tried out one of the ‘tricks’ from the book, you fill a cup with water and some corn kernels, put some tinfoil on top of the cup, the kernels eventually pop and it makes noise against the tinfoil.

I put it under her bed, it takes a few days to “work”, so I completely forgot about it, until one night I woke up to my two sisters whispering – it had popped in the middle of the night and she thought there was a rat under her bed.”

“Someone in my office would always crush lunches with his gigantic lunch box. Either he ate bricks or lead, I don’t know, but I always came to the office fridge and found that my lunch was in pieces.

So, after three bouts of this, and numerous notes from myself and other colleagues, I carefully removed his lunch box, emptied the contents (a gigantic sandwich, a Twinkie, chips, some vegetable pieces, and a few other bits), and ran over them with my car. I carefully packed it back in, and put it back.

He kept his lunch in a cooler by his cube from then on.”

“We were sitting by a pool once, and a woman stood over my wife and started spraying sunscreen all over herself – and my wife.

We asked her nicely to please move and she ignored us and kept spraying.

When we left, I took one of her flip flops with me.”

“When I was about 13, I was snooping around my older brother’s room and found a stack of 20 dollar bills stashed away.

He was saving up from his high school job to buy a car. Hundreds of dollars. To 13-year old me it was a fortune, and I figured he wouldn’t notice if I stole just one 20 — still a lot of money to me. So I did.

For years I would remember it every once and a while and feel guilty. The worst part was, when I took the 20, he was also a teenage kid and probably knew exactly how much money was there. He probably knew I took one but let me get away with it because he figured I needed it. That made me feel much worse.

15 years later, I’m hanging around with him on the holidays. I see that he left his wallet on the counter, and he’s upstairs. I sneak into his wallet, see there’s a few 20s, and I slide an extra one in there. Got him!”

“My co-worker was always complaining and always lazy with his work, yet he got recognition for the simplest thing he would actually do.

He also took credit for a full days work that was pretty much all me. I always got ignored. So one day, I came in early and I unplugged his Ethernet jack just barley to the point it looked like it was still plugged into his computer. For 4 hours he couldn’t do any work.

Meanwhile, I got my work done, and he couldn’t take any credit for it since everyone knew he didn’t have Internet access. Half way through the day, he left on break, I plugged it back in and bam, just like this it was working. By then, he couldn’t claim my work, and I begun to get noticed more.”

“A guy owed me money, but I wasn’t immediately worried because we had done transactions before. This was a transaction via USPS. He started dodging me, ignoring calls and messages and all, but stayed active on Facebook (just ignoring me and deleting my comments and posts).

After three months, getting progressively more impatient, I had had enough. I got the notification to approve him as a member of a Facebook group I’m in.

I approved him, then made a big post in the group putting him on blast for it, tag and everything. I then added his mom and sister on Facebook and sent them messages. Mind you, the guy is in his thirties.

He messaged me about it, and things are getting resolved. If it slips again, however, I’m calling his work. Working for Amazon and committing mail fraud probably don’t go well together.”

“I used to buy small treat bags of gourmet cookies from a local bakery a few years ago. I would eat maybe one a day, but they were a treat for me.

Back then my husband and I had a retail store and a few friends that would hang out at the store (it was kind of a lounge too). Well, my husband and our friends (most were guys) would just help themselves. But they had no self control nor would they even ask for some. I would buy the bag of cookies for me, and they’d be gone. I would try to hide them but couldn’t.

So I bagged up a bunch of dog treats that the local pet food store had that looked very very close to cookies for people. And were all about the same size as the ones I bought from the bakery.

I placed them where all the guys could see them, and waited.

Yep, they tried them… asked if they were a bad batch or maybe the bakery missed an ingredient or two in the dough.

I waited til they tried to eat more than 3 each… then told them they were dog treats.

“I had a guy in school who would always skip class and then ask for my notes.

We had a group project worth almost 40% of our grade and he did zero work, and the prof told me tough luck. Instead of just saying no the next time he asked for notes, I took the low road and began giving him edited versions.

I would leave items out of lists, incorrectly define things or just straight up write stuff that makes no sense.

An example of the c**p I would put in: To calculate return on investment, subtract your yearly earnings from your current bank balance, then multiply by Echer’s factorial (4.22).

If he had even once bothered to crack the text he would have figured it out, but that apparently would have been too much effort for him.

He retook that class.”

“We used to have a dog door in the basement and when we were little, we could climb through it.

It was against the rules but one day my little sister got her dress stuck and broke the frame getting out.

She pinned it on me and I got in trouble for it, so I cut all the bristles off her toothbrush.”

“My 3rd year of school myself and 5 other guys rented a 6 bedroom house from this awesome couple. Lady was the D.A. in town, husband managed the houses they had … super cool, very responsive, and just great landlords.

Year 4 we stay at the house (all 6 of us), but Cool Owners sub the management duties out to XYZ Property Management – who control like 95% of the rentals in this town. No major changes other than everything now takes forever to get taken care of, but whatever, we deal with it. Move out time comes and we get a call from XYZ saying they don’t have a damage report for the house … so every piece of damage they find will be charged to us.

We’re all pi**ed since the house had its share of damage prior to our move in. I called the owner (D.A. Lady) and asked how damages are fixed if it is outside of the security deposit amount for us, and fill her in on what they’re doing. She said that in the management agreement they are responsible for all damage as of the date they’ve taken over (unless it requires and insurance claim). She advised me to go ahead and stick them with the bill since she knew we filled out a damage sheet on move-in and we kept it in good shape.

I found the original damage slip from two years prior, updated it accordingly with any new items, copied, crumpled it up a bit, a coffee stain or two for aging …. and upon walk-through when they mentioned we would be stuck with all repairs, I presented a copy of the damage report from out move in two years prior.

They then asked to have that copy and they would send us a new copy when they got back to the office; which we declined. Then they said they couldn’t honor it because it wasn’t their letterhead and from a prior owner …. who still owned it.

We called the D.A. and she took our side citing that they should have taken care of then when they took over and she might have to re-think her contract with them …. 100% security refund for all of us.”