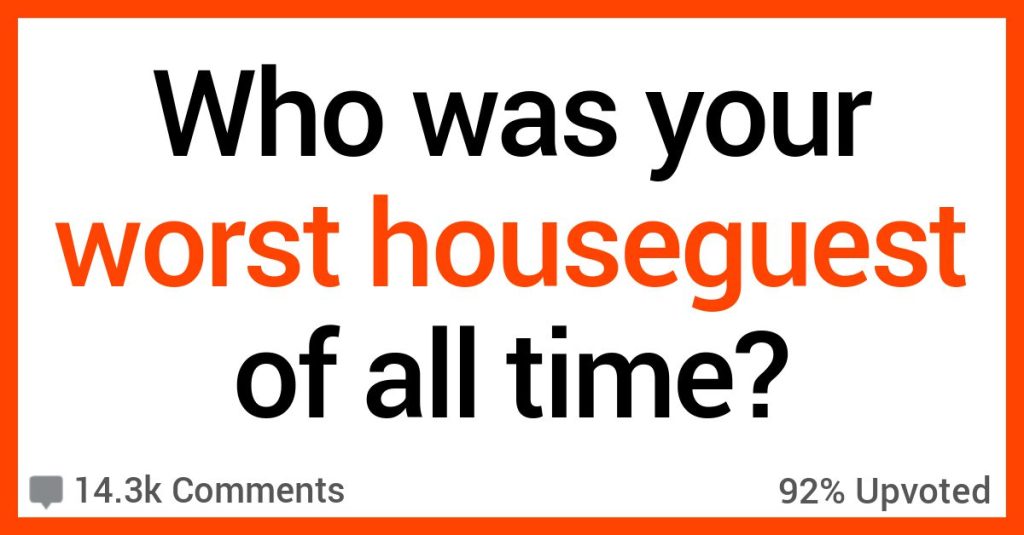 Is there anything worse than a terrible houseguest?

I mean, yes, there are obviously worse things that, but having a sh**ty person lounging around your house with no end in sight is really the pits, if you ask me.

Let’s see what AskReddit users had to say about this…

“My parents came over, and started snooping through my closet while I was making tea.

They found some s** toys and proceeded to get mad at me for having them. In my own house. In my own bedroom.

They wouldn’t have found them if they would’ve behaved like normal people.”

“My old roommate told me she had a friend who had fallen on rough times and needed a spot to crash for a while. No worries, I told her.

Oooh, big worries. He was a professional beatboxer, but more that that he was a professional smoker. Like, I’m fine with weed generally, but this dude was on 12-15 blunts a day, and would roll one as soon as he rolled his tighty whitey clad a** off of our couch.

So for like 4 months, as soon as I woke up, it was nothing but clouds of white owl and “BRRRRMMMCHKCHK-FRKAFRKACHCKABRRRRMMM.”

He didn’t fall on rough times. He WAS a rough time.”

3. Make yourself at home.

“My aunt came to visit for what was supposed to be a week or two and didn’t leave for almost a year when I was a kid.

She redecorated my room and even put up pictures of herself.

Now the running joke in my family is to randomly leave pictures of yourself around the house when we visit people.”

“Wife’s cousin stayed a couple days with us.

After he left, I discovered he purchased about $60 worth of p**n on DirecTV.”

“Sister-in-law house sat when we were out of town.

There were tons of disrespectful presents left for us – a cookie crumb trail of condom wrappers, which lead to an actual used condom – like WTF?

But the worst was after cleaning all that up, which was just aggravating and stupid… there was a putrid smell I couldn’t put my finger on. Until I finally opened a draw in the dresser in the guest room – she had left a takeout container in there, half an omelette that had gone rancid.

I gotta hope she just had to go quick and forgot all that c**p was there when she left. Either way we took our key back from her.”

“A friend I haven’t seen in a year or so called me last weekend wanting to catch up so he came over. I didn’t realize he was blackout dr**k until he walked in and I didn’t realize how to diffuse the situation.

It started with him taking a s**t in my bathroom and instead of flushing it he just put both seats down. Went into my fridge to grab a craft IPA that I have been saving for a rainy day and drank it. Went outside and out of nowhere he starting saying the n-word? He’s never been racist as far as I know. At this point I told him to get the f**k out nicely or calm down but I also didn’t want him to crash his car home as he lives an hour away.

He then said he’s going to go get cigarettes so I offered to drive him. As soon as we’re down the road he yells at me to pull over because he has to pee. Again calling me the n word for no apparent reason. I told him to just wait three minutes and he takes out his d**k and puts it into his beer can and just pees everywhere and then throws it outside.

By this time I’m livid and he grabs my arm to apologize but his hand was soaked in p**s so he basically just wiped it all over me. I knew I was going to punch him in the face if I didn’t get to the Gasstation so once I got there I told him to go inside. When he went in I peeled out of there and called his gf saying she needed to pick him up from that gas station.

I took a shower and an hour later his gf calls me and says he’s in the backseat of a cop car because he called 911 asking for c**aine. Needless to say that’s the last time I’ll be seeing him.”

“Ran into a guy I used to call a friend and let him stay with me for awhile as he was down on his luck. I guess we’d ran out of toilet paper so he used a wash cloth and left it at the side of the toilet. Kicked him out and found out later he walked away with some of my CD’s.

Some mutual friends let him stay. Against my advice. They came home one day to find him passed out on the couch with his pants around his ankles. After they kicked him out they found out he’d racked up $900 in phone s** charges.”

“I was on my honeymoon with my husband and we let his dad stay at our house, but said he had to be out by the time we got back. We let him know when we were on our way home and expected him to be gone.

We get back, he was gone but had not gotten his stuff out of the house. On top of that, he trashed the place like a group of teenagers, empty pizza boxes and trash laying around. He came back and stayed around for a bit and asked me if I was mad at him. Like of course I’m mad!! What do you expect?”

“My brother in law stayed at our house while we were on our honeymoon. He had a girl over that he just met and they had s** in our bed and didn’t change the sheets.

They drank all of the al**hol in the house, including a special bottle of champagne that had been a wedding gift. I’m sorry about your FIL. What are some people thinking??”

“Never even got to spend any time in this apartment.

I agreed to rent an apartment with my younger sister on her road to recovery from drug use, and we’d all thought she was doing well. I paid for the first month’s rent and deposit, which is standard. She moved in a week early, because I was working night shift and the whole process started on a Monday.

That weekend I got to move in, I found out my debit card was locked out because she stole it and attempted to withdraw money too many times.

It didn’t get any better after that, sadly.”

“My brother Todd is a drug addict and an al**holic. Before mom and dad finally had enough and got a restraining order (they kept thinking that if they kept him at home he’d get sober) he would wander the streets and bring home homeless people who were also strung out in the middle of the night.

One time it was this woman who used our bathroom, taking a shower and leaving an absolute mess, including her soiled thong on the bathroom floor. She also stole some stuff. We didn’t know about her until the morning when she left my brother’s room because despite being high as a kite she was quiet. And for once my brother, despite being high himself, remembered the alarm code. Which was unusual because he normally forgets it when he’s high/drunk.

Most of the time we’d catch him bringing home strange women and men to sleep in his room because the alarm would go off and wake us all up. Every time dad would throw them both out and change the garage door code for the night so he couldn’t get back in.”

“We were having a family bbq and this gong show of a woman ‘Joanie’ shows up. She’s the al**holic gf of a guy my dad and uncle worked with and were friends with.

We already knew she had a knack for ruining a good time and being a party pooper so we decided to tell her we were all getting ready to leave and go to my grandparents. She says she needs to use the restroom so we wait and then pile into my moms van and drive down the street and circle back.

We arrive back and my Uncle Kelly goes to use the restroom and immediately comes out and says what the f**k man. She had pooped everywhere, smeared it everywhere and then put her filthy panties in the sink and rolled out like it was nothing.

We didnt see her for a few years and then ran into her at Canada trust, and in the queue at the bank, loudly apologized for sh**ting all over our restroom. We never saw her again.”

Have you ever had any terrible houseguests?

It’s time to get weird, friends!