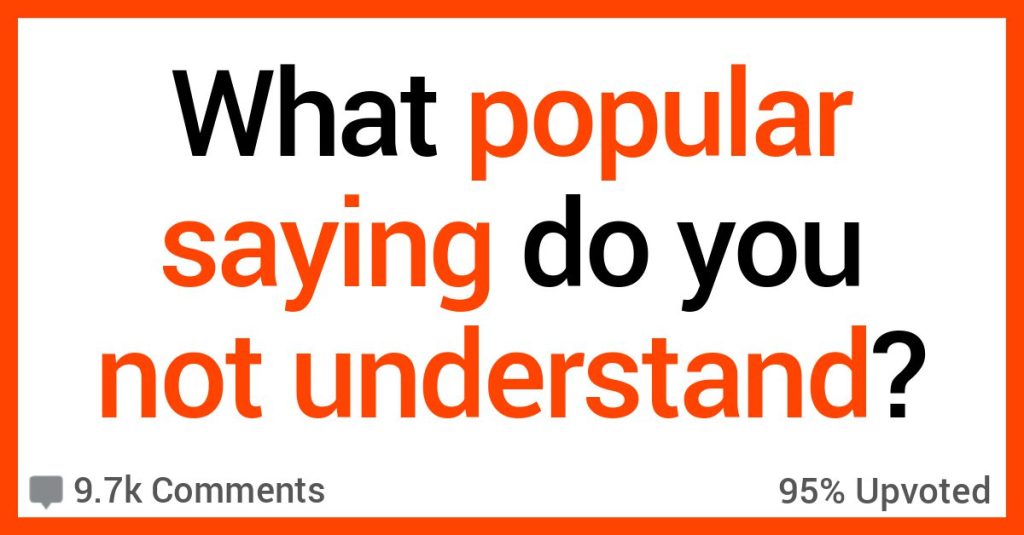 A bird in the hand is worth two in the bush.

Excuse me, what did you just say? I still have no idea what the hell that phrase means even though I’ve heard it a bunch of times in my life.

Am I stupid or am I right? The jury is still out…

What popular sayings do you NOT understand?

Here’s how people on AskReddit responded.

I understand what the it means. But, why?”

“”On accident” as in “I did that thing on accident”.

For my entire 50 years, it’s always been “by accident” but now all of a sudden I am hearing people say “on accident” and it makes no sense grammatically at all.”

3. Thoughts on this one?

“In and of itself.

I could never figure out the correct place to use, or what it really meant.”

Not sure if this one is popular anymore, but I never got it.”

“There are many ways to skin a cat.

Like, first of all, why the f**k would I even want to learn ONE way to skin a cat, let alone many?

It’s an Aussie one, meaning ‘here to get the work done’.

““Head over heels” used to say you’re madly in love with someone. I just don’t understand.

Like my head is over my heels when i’m standing up? So i’m just standing there and that describes how much I love someone?

Downhill is easier than uphill, but downhill feels like it’s implying something negative, while uphill, something positive.

“”You just want to have your cake and eat it too”

I’ve been told it means when you’re upset, you’ll be grumpy to other people because you want them to be miserable like you.”

I never took the time to understand what the f**k it meant.”

“On products: “New and Improved”

if it’s new, it didn’t exist before.

if it’s improved, it had to exist in order to improve it.

I had heard the expression used before but always just kind of ignored it, never thought about what it really meant. I raised my hand and asked the teacher to explain it, she failed. I argued that it’s unfair for me to be asked to answer a question I don’t understand based on its use of an expression rather than the content of the book itself.

She got frustrated and told me that’s my problem. I wanted to throw my desk across the room. I just ended up bulls**tting some nonsense based on what I think the question was trying to ask. But it was really hard not to get caught up in and distracted by what seemed to me an illogical/meaningless expression.”

What popular sayings don’t make any sense to you?