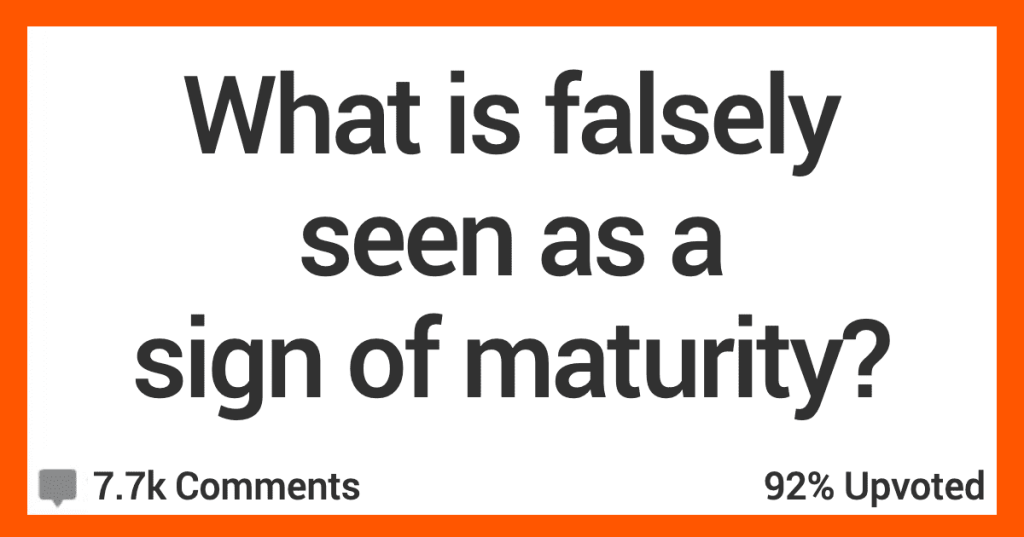 Because we’re going to hear from folks on AskReddit about what they think are falsely seen as signs of maturity.

So if you’re doing any of these, maybe it’s time to reconsider your behavior.

“Being in a relationship

My  family thinks its a travesty that I don’t ever want children, my mom always thought I was just being young and angsty and would change my mind. Now that im in my 30s shes given up on that.

I truly don’t understand how most people can even afford to have children anymore and provide them anything else except the bare ass minimum to sustain life. Everything is sooooo much more expensive than it was when I was a kid, and the wages are about the same.

Money just doesn’t go as far as it used to, and its getting harder and harder to build up and acquire credit to actually own a house or anything like that.”

“Putting down people for certain interests.

Always thought there’d be a point where I wouldn’t be interested in things like video games or Transformers.

I looked at my dad and felt one day I’d just mature enough to put it all away. That day has not yet come. I’m 50.”

“People who can’t have fun.

Yep, those are the permanent scowl fellas with the goatees, trucker hats and the sunglasses (also, usually accompanied by a sleeveless T-shirt or work shirt).

They seemed totally conditioned to never show any positive emotion or really express themselves at all besides by acting “tough” or projecting a sense of anger since that is seen how an ideal, alpha male breadwinner is supposed to behave in their peer group.

They also go to great lengths to avoid appearing friendly, weak, agreeable or sensitive/emphatic in any way since that would signal to their peers that they are too effeminate or emotional and therefore must not be a REAL man somehow.”

It’s a dragon, with a window for displaying enamel pins. I like collecting pins. I like dragons. What’s wrong with having a cute backpack/purse in this hellscape of a world we live in?

I work, I pay my bills, I take care of myself and my pets, and I’m getting married in a month. I’m an adult. So what if I like cute things? I’d rather have my shiny dragon bag than your boring a** brown “leather” generic bag from Target.”

Sounds so strange but the most mature people usually have no problem tapping into their childish or silly sides.

Immature people overdo it trying to be “cool.””

“I have seen many examples of people mistaking arrogance with confidence.

Confidence, of course being a sign of maturity. I have been there myself when I was younger. Incredibly arrogant and I thought I was being confident.

But confidence is someone who is secure in themselves and who don’t feel the need to prove themselves to others all the time. Arrogance is the opposite of that.”

“Girls getting their period.

A lot of people think girls “become women” when they start their period.

I was 10 when I started mine and still a literal child.”

“Being stiff and ”mature“.

Basically putting yourself above others due to their position in comparison to yourself.

That just shows insecurity, if anything.”

“Not apologizing to younger people.

Also treating everyone younger as you like they are a kid, even if they are an adult.”

“Young people tend to go through a phase where they try desperately to distance themselves from “childish” things. They are so very super serious, in this phase, fun is not for adults!

Meanwhile, here I am at 40 giggling at ninja turtles cartoons. Being an adult does mean you have to make room for serious things, and for sure, a lot of modern adults are FAR too invested in trite frivolities for their own good.

But if you cannot turn it off now and them and laugh at Scooby Doo I feel bad for you.”

“When the eldest child is made to be a third parent and is good at it, it does not mean they’re mature.